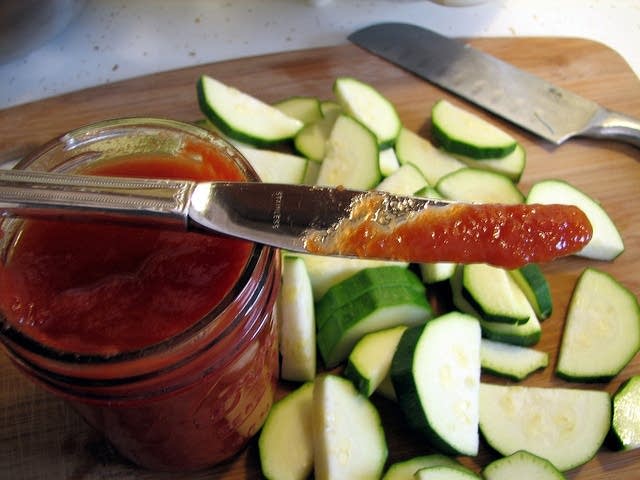 Ketchup is the all-American condiment. Food writer Karen Solomon, author of Jam It, Pickle It, Cure It, shares her techniques for making plum ketchup and tomato ketchup.

Lynne Rossetto Kasper: Ketchup is the all-American condiment. The ketchup that we have is usually tomato ketchup, but there's a whole backdrop of ketchups that have happened all over the world. What are your favorite kinds of ketchup?

Karen Solomon: The red stuff. But I have to admit, I prefer my homemade ketchup to that particular national brand that has become synonymous with the meaning of ketchup.

But I am actually an even bigger fan of plum ketchup. In summer I love, love going to the farmer's markets. We get so many wonderful varieties of plums here in California. Homemade plum ketchup is tart, it's savory, it's sweet and acidic. In my mind that's actually a perfect ketchup.

LRK: What are the basics of doing it?

KS: You start with some plums, you boil them down to render their flesh. You boil them to burst the skins and to cook the pulp. Then you strain that to get rid of all the skins, the pits and everything.

Then you take that puree and you mix it with a little bit of orange marmalade, which adds a really nice, citrusy note and also just makes it a little bit tarter. Then you add some of the warm spices that we tend to think of with ketchup: a little cinnamon, some cardamom, star anise and maybe a bay leaf or two. Then to balance out the sweetness of the fruit, I always like to add either onions or garlic or both -- just something to make it taste that much more savory.

Then you cook it down into a really, really delicious sauce. In our house it goes pretty quickly.

LRK: Now the big question: How do you do the great all-American ketchup?

KS: This is a funny thing, but I actually prefer the taste of my own homemade canned ketchup when I start with canned tomatoes. There's something about starting with canned tomatoes -- they're halfway prepared for you. They break down a lot more easily. It just loans itself a better flavor. Of course the finished product cooks up a lot more quickly as well.

Basically I puree canned tomatoes. I brown some onion, and that's a really important step. The taste of raw onion versus browned onion adds a lot of sweetness and flavor complexity to the ketchup. Then I combine the two with a little tea bag of spices. I like to put in some cardamom, some cloves, a little bay leaf, black peppercorn, a little star anise -- those warm spices that we associate with ketchup. Then I let that boil into the vegetable purée and let it steep for a while.

Then of course I think what makes a ketchup a ketchup is the addition of vinegar and sugar. I like to use a little brown sugar because it has that nice carameliziness. I also use some Champagne vinegar, which maybe seems like overkill for a ketchup, but I think that it's not too aggressive, not too assertive. I'm a big fan of white distilled vinegar in general for pickling, but in my ketchup I like that tang just a little bit mellowed. It's delicious.