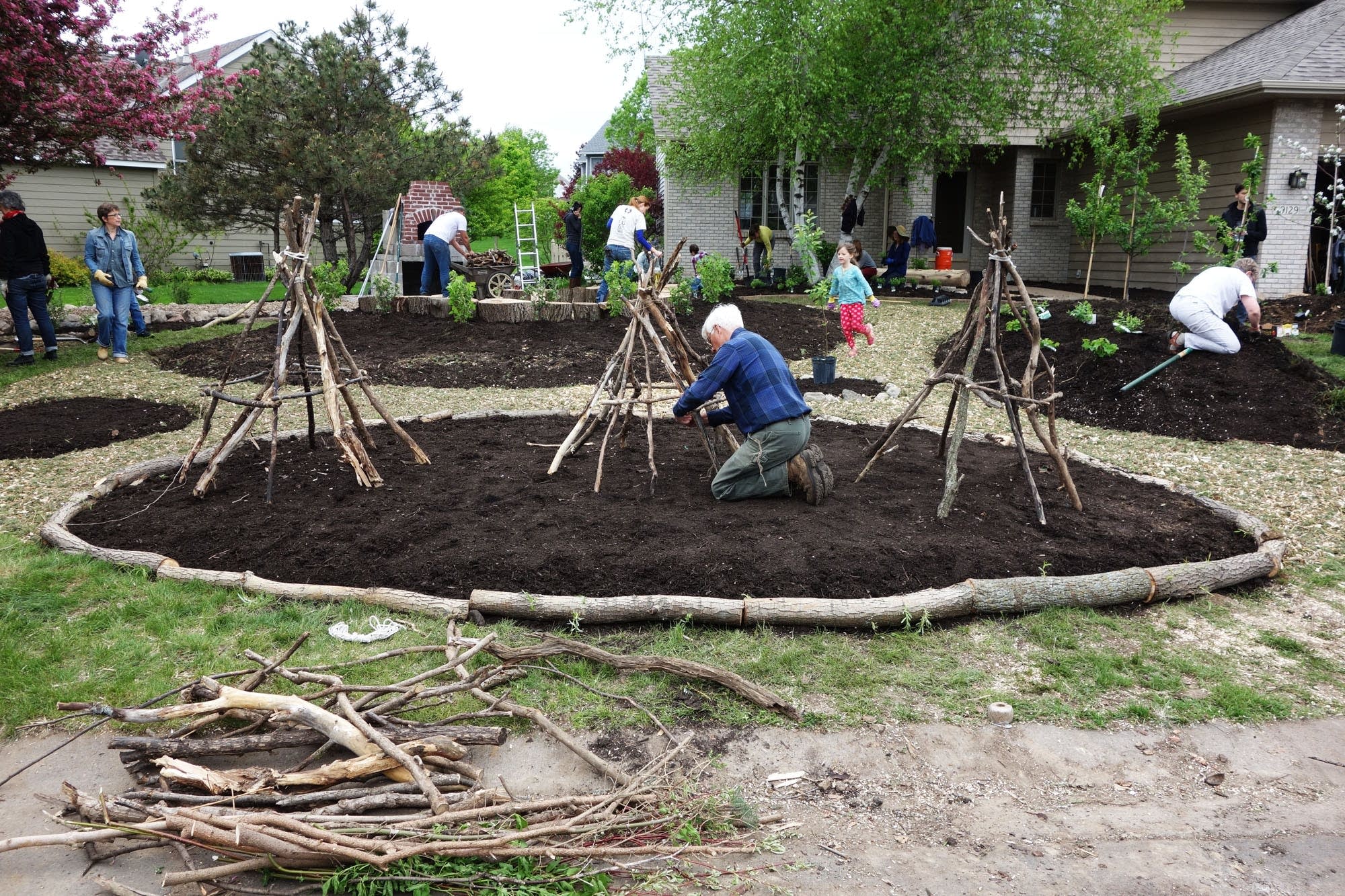 How about turning your front lawn into an edible masterpiece? The masterful part is thinking how to turn this flat, green space that is the most visible part of your home into something that invites us in, nourishes us and perhaps starts changing our community.

This is what artist and architect Fritz Haeg calls an edible estate. It's one of the flock of projects he's created around the planet. They all involve bringing people together and seeing new potential. Haeg partnered with the Walker Art Center in Minneapolis for his year-long series of projects called Fritz Haeg: At Home in the City. He is the author of Edible Estates: Attack on the Front Lawn.

Lynne Rossetto Kasper: When I looked at the material about your edible estates, words to describe them have included confrontational and anti-capitalism. You've described them as being between doom and hope. We’re talking about the hallowed American front lawn. What are you doing?

Fritz Haeg: It's a provocation and it's a proposition in a way. It's a very public, prototypical garden that I work on with families in cities around the world to show other residents of that city how they might not just grow their own food, but reclaim this piece of land in front of their house that maybe they haven't considered. At the same time, it puts food on the streets and gets food growing in very dramatic ways that everyone gets to watch.

LRK: I know you've done one here in Minnesota. Give us a picture of what this is.

FH: The most recent garden is No. 15 that's been planted in the St. Paul suburb of Woodbury. This is one of my favorites so far. It's one of the biggest -- it's on a 4,500-square-foot front lawn in a neighborhood where you wouldn't expect to see a garden like this.

All the gardens are as diverse as possible, with everything I can get my hands on that will produce food in that region. In the case of this garden in Woodbury, there's part of the garden dedicated exclusively to the child-care center across the street -- there's a little kids' garden with triangular raised beds -- and a bread oven.

FH: Yes. They like to let their neighbors know when they have it fired up so everyone can bring over their pizza and bread. There's a little fruit tree orchard; there are edible flowers; there's an herb garden; there's a big circle of stumps, that's the center seating circle; there are even hops growing up the side of the garage. [Ed. note: You can find updates about the estate on the family's Tumblr.]

LRK: These are not rows of corn growing on my front lawn. This is something obviously that's designed to engage.

FH: There are no rows, so this is not a mini-farm in that sense. It's a pleasure garden that happens to produce food.

I like gardens that are very rigorously designed, then allow wildness and chaos to happen. If a tomato wants to grow in the middle of the fruit trees, that's welcome. That's my approach to gardening at least.

FH: The point is to make visible food production in the city, but in a very pleasurable way. I think the whole point is for everyone to look at this and think, "I could do this too."

If nobody else does it in the neighborhood, at least everyone gets to watch and look at it. Those little kids growing up on that street who may not otherwise recognize that food grows on plants coming out of dirt, they get that reminder every day. Most directly for those kids across the street in the day care center, they are gardening and growing food.

I am thinking about everyone who lives in this city and that neighborhood and on that street. But most specifically, I think kids are the easiest to reach with these kind of gardens.

LRK: How does the hope and the doom come into it? You said your gardens sit between hope and doom.

FH: I'm an artist, I'm not a professional gardener or landscaper, and this is not an advocacy project. I'm interested in storytelling, poetry and conflict -- even conflict if you can imagine that in a garden.

When people look at these gardens, maybe there's a first initial response of hope and this thought that we could all do this. Maybe at the same exact moment, you're having an opposite thought, which is, "No one is going to do this. No one has time." There are all kinds of reasons where not everyone is not going to do this tomorrow.

LRK: Speaking of the spot, how do you select where the garden is going to go? People don't hire you to do this, right?

FH: People don't hire me. The people I end up doing these gardens for are people who already know how to garden and grow food, hopefully. But I do an enormous amount of work and research.

In the case of this most recent garden in Woodbury in the suburbs of St. Paul, I did an open call in the Twin Cities. I received 100 emails with pictures and stories. I visited 10 of them. From those I picked one.

I'm looking for the most provocative site, the site where nobody else is going to do this in the neighborhood. The family has really got a lot of hidden gardening energy that's going somewhere else and putting it in a very public place, in their front lawn in this case.

LRK: They work with you on this? They have input?

FH: Yes, we work very closely. In this case they have two grown kids who have just left the house. They have parents and grandparents who are very involved. They have neighbors who are extremely involved. There's an entire community using this garden and spending time there. But we plant it, then I leave and it's theirs. It's not my garden, it's their garden.