Julia Child on cooking: 'That was really what I'd been looking for all my life'

by Lynne Rossetto Kasper
Listen: Julia Child on cooking: 'That was really what I'd been looking for all my life'
11:30 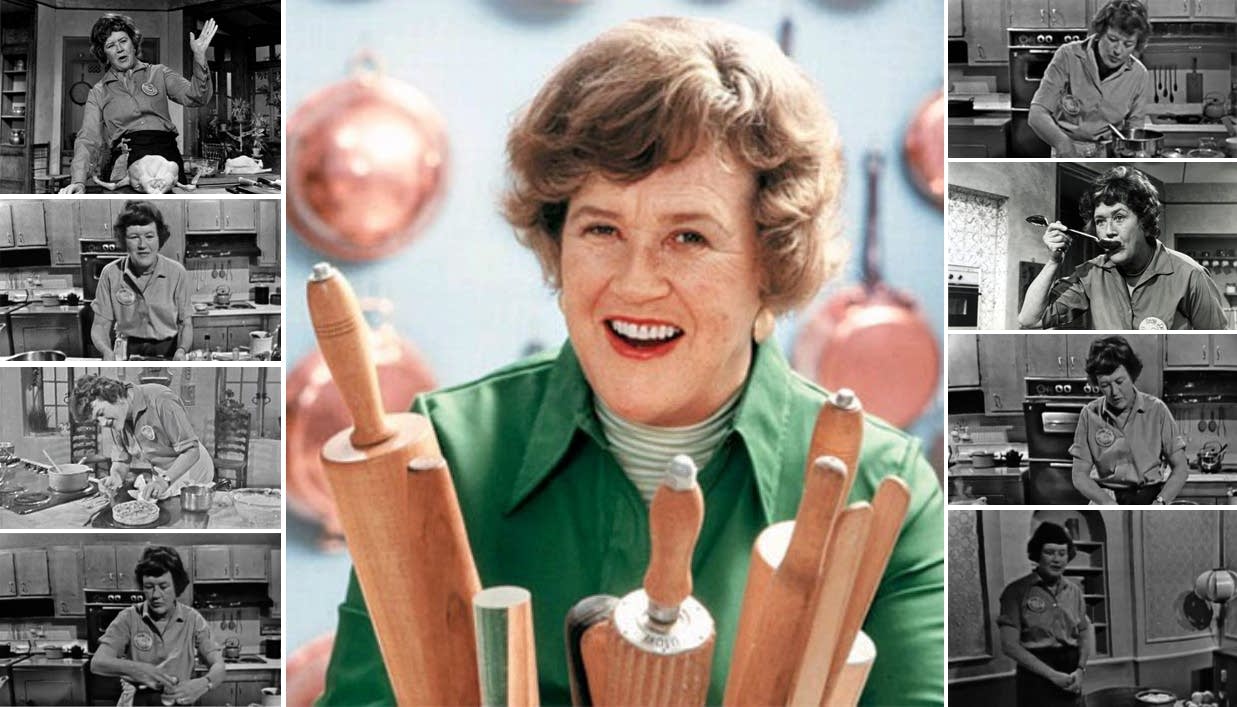 More than a century ago, Julia Child arrived on the scene. She was raised to marry and take her place in Pasadena, Calif., society, except she didn't. Instead, during World War II she joined a secret intelligence group, the Office of Strategic Services. That led to marrying Paul Child. He took her to Paris, where she fell in love with cooking.

Eventually we fell in love with her. She put TV food shows on the map. She never dumbed anything down. She did serious cooking but she made it a romp. At the same time, when many pros only did high-profile appearances, Julia was incredibly generous with her time.

When we began this show in 1995, I'd worked with Julia on and off for quite awhile, but her schedule was jammed. When we invited her on this new show with a modest audience, I didn't expect her to come. But she did -- big time.

Lynne Rossetto Kasper: I'm going to take you back now to the mid-70s, the first time I met you. I want to share this because for me, it was really a revelation about what worked for you.

I was running a food program for a department store in Brooklyn, N.Y., and Julia was introducing volume two of Mastering the Art of French Cooking. We were going to be the first place that Julia was going to cook in public. We had enough seating -- I'll never forget this -- for about 200 people. Seven or eight hundred people camped out before dawn outside the store to come and see this woman cook.

But you were working in a kitchen that consisted of a pail of water, a counter and I think a hot plate. What struck me was what a teacher you were. You obviously knew your stuff; there was not any question. But you had such zest. You knew how to communicate. You were having such a good time nobody could resist you. When did you discover what a teacher you were?

Julia Child: I'd done quite a lot of teaching and I'm interested in it. I'm very anxious for people to know how to do things and exactly how to do them. I was always very hungry. I think that's necessary, don't you?

JC: Then I got very serious about food when I met my future husband, Paul. It was his encouragement that I think really started me out. We lived in Washington, D.C., for the first year or two. Then because he'd been brought up as a young man in France and spoke beautiful French, he was assigned to Paris by the U.S. Information Agency.

That's where I really started in -- I just couldn't get over that food. It was just marvelous. It was still the old France: just wonderful cooking and nobody was bothered about cholesterol and all of that stuff. We just ate and enjoyed every minute of it.

LRK: I remember Paul told me briefly about the joy he had of introducing you to Paris, that you just kept marveling at it.

JC: I couldn't get over it. I'd had French all my life, but I really didn't get my foot on it until we got over there. He was wonderful with making up sentences for how to pronounce things. I remember for "R" and "U" it was la serrurerie sur la Rue de Rivoli.

LRK: What does that translate as?

JC: It means the locksmith shop on the Rue de Rivoli -- all of the vowels in it that you needed.

LRK: How did you meet Simone Beck? You and Simone wrote those two volumes along with a third woman.

JC: That was our first book, Mastering the Art of French Cooking.

As soon as I got there and we got settled, I decided I'd better start learning how to cook. So I went to the Cordon Bleu and I just thoroughly enjoyed it. I found that was really what I'd been looking for all my life really.

But then nobody else was interested in cooking. Neither the French of my sort of general level nor the Americans, and so I had nobody to talk to. Then a mutual friend introduced me to "Simca" Simone Beck Fischbacher. She was in the same position. She had started out at the Cordon Bleu with the fabled Henri-Paul Pellaprat, who had really put the school on the map. She was a very good cook. We met and we just immediately became bosom friends. She was really my family in France.

LRK: I've heard that the two of you felt as though you were sisters.

JC: Yes -- we were really. Then she also had her colleague and friend Louisette Bertholle. They had been starting to write a book on French cooking for Americans. They had a collaborator. The collaborator died, which I was very happy to hear, and so I became their collaborator.

LRK: I was going to be polite and say how unfortunate.

JC: I came in with them and I had some American friends who wanted to learn cooking. They didn't speak any French so they said, "Well, you teach us." I thought, "Heavens, I'm not ready for that." But Simca was and she said, "Fine."

We started in about three days later. We had a wonderful old apartment and on the top floor was the kitchen, so we started our school there. Then we began working on the book, which took us eventually about 8 or 9 years to write.

How long did your Splendid Table take?

LRK: Yes. But the first five I didn't know I was writing a book, all I knew was I kept researching. But you knew from the beginning you were writing a book. In addition to yourself, you had the Americans to experiment on to make sure this was making sense.

JC: We had people in the states to whom we sent chapters to see how it worked out. But in those days -- this came out in '61 -- before then, the recipes were very short. I remember trying royal chicken from some recipe when I was just starting out. It just said put it under the broiler for 20 minutes, but it didn't tell you how far from the flame, that you should turn and baste it, watch it and so forth. Our recipes are very long, but if anyone does a recipe of mine or of ours, I want it to turn out well.

LRK: You have always had a very strong sense of moderation about food.

JC: Moderation, small helpings, a little bit of everything, a little weight-watching and exercise, have a good time and then you'll be healthy.