Quark: It's easy to make this two-ingredient cheese at home

by Lynne Rossetto Kasper
Listen: Quark: It's easy to make this two-ingredient cheese at home
04:17

Email thisShare on FacebookShare on TwitterPin it!Share on Tumblr
Sponsor us
Photo: iStockphoto

Noelle Carter is a “Why not?” kind of cook. She writes for the Daily Dish column in the Los Angeles Times and runs the test kitchen there. She asks a lot of questions, including, “Why not make that myself?”

Her latest project is quark. Not the physicists’ neutron proton quark, but the dairy quark that's heading into its moment in the sun.

Lynne Rossetto Kasper: I think we need a definition: What is quark?

Noelle Carter: It's a fresh, creamy-style cheese. There are variations of it that can be found throughout the world, but this type of cheese is mostly particular to the Scandinavian region, northern Europe, and parts of Russia.

LRK: Making it, do you need a culture? Do you need something beyond just a way to separate the curds and whey?

NC: You don't. You just need to make a quick trip to the grocery store. You can use all your own kitchen equipment and you can whip it up in 2 days.

NC: Take a couple cups of milk. We were testing it with whole milk, but I've also tried it with lactose-free milk and nonfat milk. Make sure the pot is completely clean. Bring it to a simmer on the stove. Let it come to room temperature and then whisk in maybe 1/2 cup of buttermilk. Let that sit overnight at room temperature and you'll notice it will thicken to a yogurt-like consistency. Take that and strain it overnight in a cheesecloth-lined strainer. The next morning you've got cheese.

NC: It doesn't get any simpler than that. Even I could do it and I'm so intimidated by the whole thought of making cheese.

LRK: Is there harm that could come to it -- spoilage -- by leaving it out for a day?

NC: When it thickened overnight, it did have a fresh cheesy smell, but nothing off or negative whatsoever. When we strained it, we strained it in the refrigerator -- I specify that in the recipe. I think we had a batch in there for almost a week, but I'd recommend maybe 3 to 4 days.

It was totally simple and you get this wonderful creamy cheese that's kind of similar to a mascarpone meets a sour cream meets a yogurt. I'm testing all these different batches of quark and I'm wondering if what I'm making is really cheese. Is this really what I think it is?

So I took it to Norbert Wabnig, who owns The Cheese Store of Beverly Hills. He takes a bite, and then he takes another bite, and he's like, “This is the best quark I've had in a long time. What is your secret?”

He had quark in the store that he's selling and we tried them side by side. The homemade stuff was creamier, it was lighter, and it did have more of a personality and a depth of flavor than the store-bought stuff.

LRK: So it has a little tang to it but a lot of richness?

NC: It's wonderfully rich and it's got this nice bright, not too assertive tang that really gives a nice lift if you're spreading it on a bagel or a sandwich. There are German and Austrian recipes for using it in cheesecakes and strudels. I mean, it's just a wonderful cheese.

NC: I'm really simple. I would throw some granola in there and some fresh berries and call it breakfast.

You can bake with it. We did a tart that we ran with the story, an asparagus and bacon -- almost a quiche-like -- tart. The cheese just lent this amazing richness, but you got that nice bright tang; as heavy as the tart might have been, it still had this lightness to it because of the tang from the cheese. It was just wonderful. 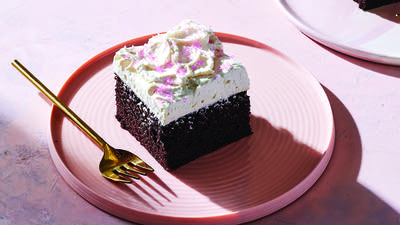