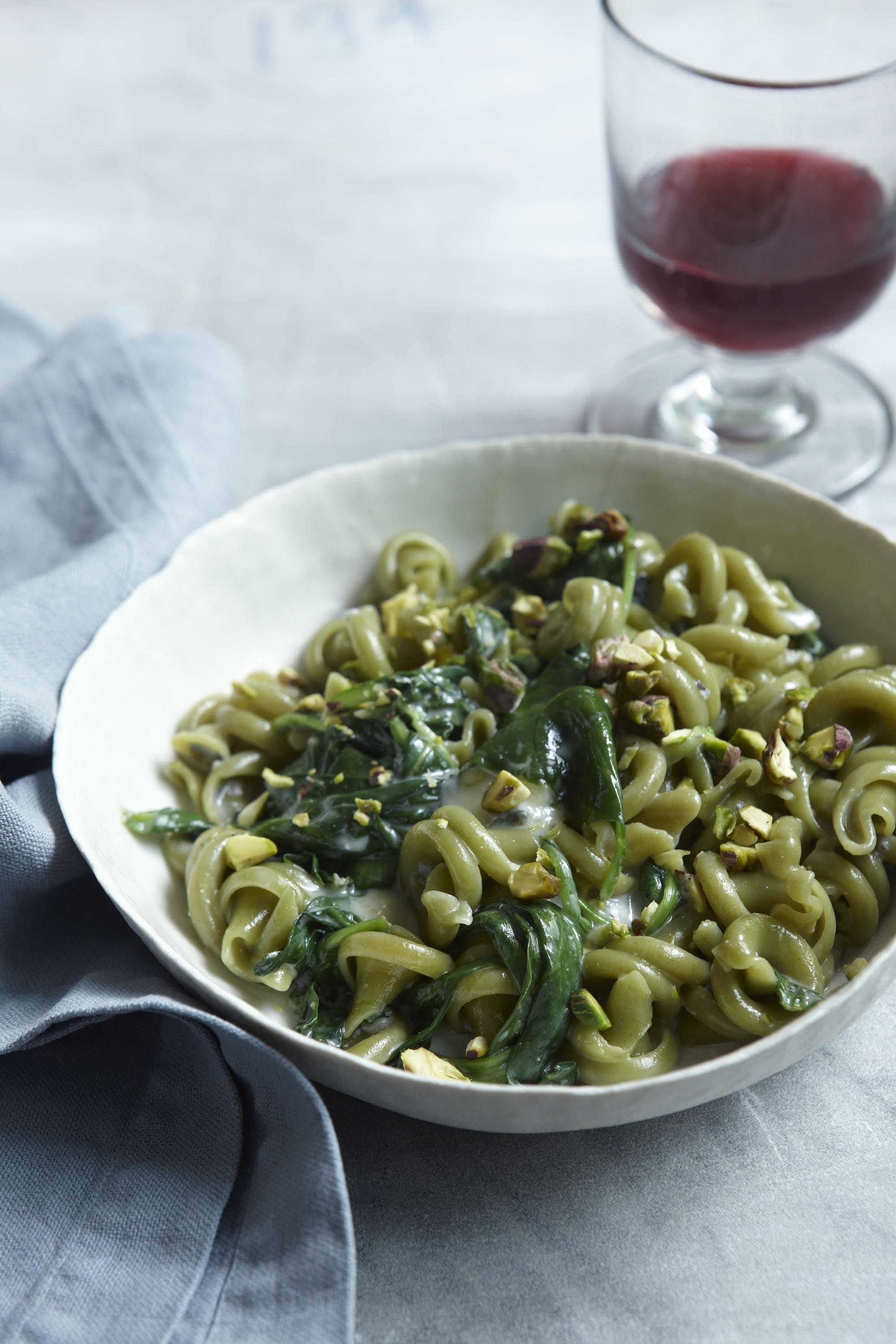 I know this sounds like a Dr. Seuss recipe (only without the elastic scansion) but it is, as the Italians say, "sul serio," no joke. The green factor is not crucial, but since this came about because I happened upon some spinach-dyed stubby coils of trottole—the pasta shape named after its supposed resemblance (I don't see it) to a spinning top—it feels right to me. Serendipity is only part of the story: I have also always had a thing about pasta and blue cheese, both separately and in conjunction. This recipe is in many ways an evolution of the Pasta with Gorgonzola, Arugula & Pine Nuts in my Quick Collection app, and indeed you could make any sort of mishmash of the two. The major developments here are that I felt the need—or rather a fancy—to sprinkle the deep green of the pasta with the paler pistachios, and I add no cream or mascarpone (as I used to) since a little pasta-cooking water, whisked into the cheese, makes it as creamy as you could wish for. This is not a dietary stance, but because the starchy water doesn't mute the palate-rasping piquancy of the Gorgonzola.

If you can't find trottole or, indeed, radiatori, which have a similarly corrugated form, do not despair. While I love the way the scant but fierce sauce cleaves to the shape, you do get some of that effect with the curl of fusilli.

Heat water in a pot for the pasta, salting it when it comes to a boil, then add the pasta and cook following the package instructions, but checking 3 minutes before it's meant to be done. This needs to be really al dente because it will carry on cooking as you make the sauce.

Before draining the pasta, remove a cupful of pasta-cooking liquid, then tip the drained pasta back in the hot pan with 2 tablespoonfuls of the liquid, the crumbled cheese, and the spinach, and give a good grinding of coarse black pepper. Put the lid on the pan—off the heat, though back on the stove – and leave to stand for 2 minutes.

Remove the lid, turn the heat back on low, and stir the pasta, cheese, and spinach together, along with as much of the cupful of cooking liquid as you need—I find a scant 1/2 cup is about right—until the cheese is melted into a light sauce and the spinach, wilted.

Take off the heat, toss with about two-thirds of the chopped pistachios, and divide between 2 warmed bowls, sprinkling each bowl with the remaining nuts. Serve immediately.