Why the high menu price? Many farmhands touch each oyster

by Lynne Rossetto Kasper
Listen: Why the high menu price? Many farmhands touch each oyster
06:33 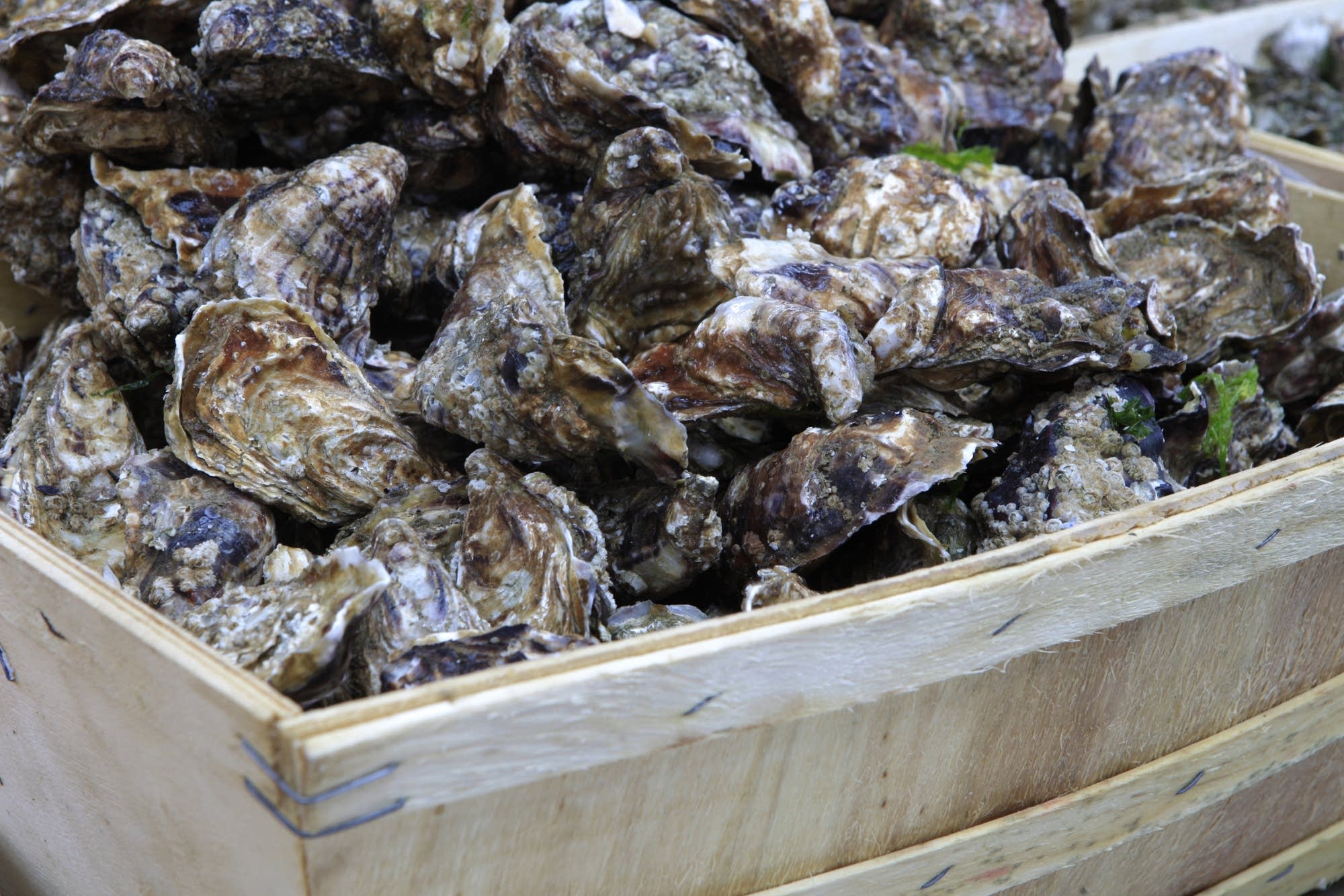 Why would a woman with a cushy job reporting on the good life in Boston quit so that she can stand ankle-deep in freezing water in lousy weather nursing a bunch of oysters?

Lynne Rossetto Kasper: How did you come to this?

Erin Byers Murray: I was living this great life in Boston. I had a good career; I was making good money. I was satisfied professionally, but there was something that I wasn't being fulfilled by. I was writing about food and I understood where food came from, but I really hadn't seen how food was produced. I hadn't ever gotten my hands dirty.

Around the same time, I happened to meet a group of oyster farmers from Island Creek Oysters and they asked if I wanted to take a tour of the farm for story ideas. I went down on this gorgeous 80-degree day in August, got in the water in my waders, looked around and thought, "Wow, this is pretty spectacular. I could see myself doing this." The farmer said, "Well, we're out here in January doing it and we're chainsawing through the ice to do it." I thought, "Now that is what I want to do." So I concocted a plan, I quit my job and went to work for the farm at Island Creek.

LRK: What was this like for you when you actually got into it?

EBM: It was tough. It was back-breaking. I was bent over for hours at a time. I was standing in the freezing cold for 12 hours straight. Believe it or not, I actually liked it. That sounds terrible, but I did love it. The first couple of months were brutal. My body had to be broken down and then rebuild itself based on the work that I was doing.

LRK: Could you explain to us how you farm an oyster?

EBM: Sure. Oysters come to the farm from a hatchery. They're spawned in a controlled environment and we call them seed, but they're actually baby oysters -- they're fully formed oysters that are about the size of a pepper flake. When the farmer gets them, his or her job is to get them up to a size where they're safe to live in the water. We keep them in controlled tanks, we pump them with the bay water and they are grown from the pepper-flake size up to about a quarter of an inch in probably 3 or 4 months. From that process, we then put them into a nursery where they're grown a little bigger in a more protected environment. Island Creek finishes their oysters for the last 8-12 months growing on the bottom of the bay floor right at Duxbury Harbor.

LRK: What was the first task you had to do when you went there?

EBM: Well, I started out culling, which is the process of sorting the oysters. Oysters grow at different speeds, so we would harvest the oysters -- that was something we usually did by hand. We would go out and hand-pick the oysters off the bay floor during a low tide, and then we'd bring them back to a floating processing plex, which is a barge. We would work on that barge and basically take all the oysters we'd harvested and drop them out onto a table. So imagine a pile of oysters the size of a turkey. Basically, one by one, you're sorting through to separate them by size and by shape. In the process you're handling each and every oyster, but you're also standing across the table from your crewmates for up to 8 to 10 hours at a time, no matter what the conditions are. That was the part that was a little daunting to me at first, because you just see piles of oysters in your dreams; they're washing past you at all times. The process of culling helps you understand why oysters are such a unique product: Each one is completely different and they grow in a very unique way.

LRK: What are you looking for when you cull?

EBM: Island Creeks have this really consistent round, almost teardrop, shape. They have a deep cup, which you measure maybe an inch or two between your fingers. And they are usually about 3 inches in length -- sometimes a little bit longer. So, any ones that are not that -- that are maybe smaller or misshapen -- they might go back out into the water where they would regrow or do a little bit more maturing before we harvested them again.

LRK: The level of hand work that you talked about in the book was so striking. You said something about how they sell these for 75 cents each. You have to question: How do people make any real money doing this work?

EBM: Good question. It is a lot of hands-on work, and the oysters are handled anywhere from 15-20 times in their life cycle.

EBM: For something that grows in the water, that doesn't make a lot of sense. But as farmers, we were crafting their growth. We were pruning their shape a little, chipping off the edge of their shells so that they could regrow stronger, and all of that is what creates that consistent shape. That handiwork does require a lot of time, attention and energy.

The yield of an oyster crop, if you're getting a million oyster seed, might only be 300,000-400,000 that come up as edible, sellable oysters. So, the owners might only do the work themselves as opposed to hiring a crew of people to do it. It is quite an investment; it might take three years for an oyster farmer to see any kind of profit.

LRK: After all of this, did you actually find what you were looking for?

EBM: Yes, I did. I found passion in my work. I didn't start this project to become an oyster farmer. There are people out there who are going to always do that better than I ever could, but it turns out I actually like being a writer. For me it was about regrouping, stepping back and understanding why I'm doing what I'm doing.