Putting a twist (and kraut juice) on classic cocktails at Grunauer

by Russell Newlove
Listen: Putting a twist (and kraut juice) on classic cocktails at Grunauer
05:23

When bartender Scott Beskow was drawing up his cocktail menu to complement the Austrian food served at Grunauer restaurant in Kansas City, Mo., he hit upon a small problem.

“They don’t really have a cocktail culture in Austria,” he says.

Kansas City, however, does. The burgeoning drinks scene in the downtown arts district allowed Beskow plenty of room for experimentation. At the top of the current drinks list is Der Schmutzige, “The Dirty One.”

“It really is basically built off of the idea of the dirty martini," Beskow says, "which is base spirit and olive juice. We just realized that we had a ton of kraut juice, we had a ton of pickle water. The beet brine we actually make for the drink, but two of the three parts, the constituents of the brine, are from the kitchen. It still stays with the briny, salty thing, but it also adds an earthiness from the kraut and the sweetness from the beets. Then mustard and black pepper are two of the spices that the kitchen uses a lot, obviously. So we took mustard flour and peppercorns and put that in vodka and let it sit. It doesn’t take long. The pickle needs to be cold, the drink needs to be extremely cold. Not that it’s not good; it really still tastes good when it warms up, but the colder the better at least for that first sip."

Beskow slides a martini glass over to me. Honestly, given the list of ingredients, which is heavy on things like brine and kraut, I was expecting it to look a bit like, well, bathwater -- but a little more elegant. Instead, I’m presented with something violet, more cosmopolitan than a martini, a result of the sweet beet juice, slightly opaque with a huge wedge of pickle on the rim. It’s a decidedly aromatic drink; the mustard spices and pepper filling the nose rather than the mouth.

And yes, it’s an acquired taste.

“It is one of those drinks," Beskow says. "I tell people when they order it: [1] Make sure you like everything that’s listed, and [2] It’s a love or hate drink. So some people crave it; they come in for it. Other people try it and don’t like it, and we’re more than happy to replace it. I prefer people to try something a little bit outside their comfort zone, but if you don’t like kraut, beets, mustard, pepper, or pickles, it’s definitely not the drink for you."

Yet I keep going back for more, just to make sure that, yes, I did taste it right. And yes, it does taste like pickle. And yes, I would drink it again, though probably not in the same sitting. Appetite fully whetted, we move on to dessert.

“Flussiger Strudel means ‘liquid strudel,’ so it’s really intentioned to approximate the delicious strudel that our chef de cuisine makes. The crust for the strudel takes a while to prepare, so the first thing he does is peel, core and slice the apples, and then they get rolled in sugar and cinnamon. They sit, and just in that process of sitting with the sugar, the juice drains off and he’s left with a cider syrup. That’s almost what it tastes like: apple juice, sugar and cinnamon. But that sweetness of that item is balanced out by a squeeze of fresh lemon, so it doesn’t end up being a cloyingly sweet drink. It also has Gosling’s dark rum, a dash of old-fashioned bitters, which have cinnamon and clove, and egg whites which further round it out. They create a meringue texture; they make it airy and that takes any of the additional sharp edges of the flavors and makes it really mellow. It creates a really beautiful froth on the top of the drink and we dash that with some Hungarian cinnamon and swirl it with a swizzle. It looks really good. It’s really pretty and then it drinks really smooth and tastes like a liquid strudel. This one needs a really good long shake; you really want to get the egg whites to do their magic and give it a real airy, delicious texture.”

This actually looks like a dessert. Beskow flicks the nutmeg through the foam much like a barista would with a crema on an espresso, so the glass looks like it’s holding a soft, velvety cupcake. And it tastes like Christmas: all baked apples and cinnamon. These cocktails might not conform to the classic canon, but Beskow explains that they do their intended job and will complement anything you’ll eat at Grunauer.

“We didn’t want to be untrue to the flavors and make things that didn’t tie in with the cuisine,” he says. “In fact, they’re made from by-products of the cooking process, so they’re literally and figuratively tied in with the food.” 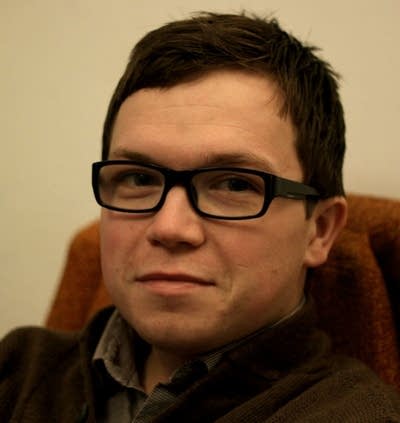 Russell Newlove is a writer and broadcast journalist, with a fondness for food and strong drinks. He has worked for the BBC, Monocle 24, and APM's Marketplace. He is based in London, but prefers the beer in Kansas City.