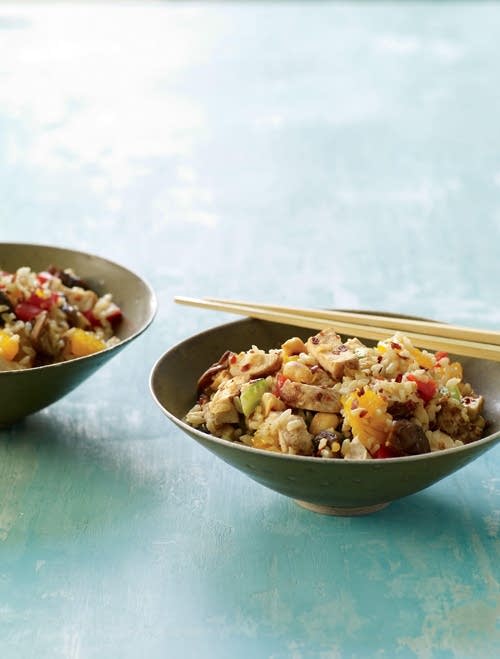 1. Combine the water and rice in a medium saucepan and bring to a boil over high heat. Cover, reduce the heat to low, and simmer until the rice is tender and the water has been absorbed, about 40 minutes. Set aside, covered, to steam for 10 minutes.

2. Meanwhile, put the mushrooms in a small heatproof bowl. Bring a kettle of water to a boil and pour over the mushrooms. Soak for 20 minutes.

3. And while those first two steps are going on, heat a large nonstick skillet or grill pan over medium heat. Rub the sesame oil and five-spice powder into the chicken breasts. Slip them into the skillet or pan and cook, turning once, until well browned and an instant-read meat thermometer inserted into the thickest part of a breast registers 160°F, about 10 minutes. Transfer to a cutting board to cool for 5 minutes.

4. Dump the cooked rice into a large serving bowl. Drain the mushrooms in a colander, remove the stems and discard them, then slice the caps into thin strips and add them to the bowl. Finally, chop the chicken into 1/2-inch bits and toss these into the bowl as well.

Make ahead: Immediately after preparing, cover and store in the fridge for up to 4 days.

Save time: Use 3 1/3 cups cooked long-grain brown rice and omit soaking and cooking the raw grains.

Make It Vegan: Omit the chicken and substitute 12 ounces smoked, dried tofu, sliced into match-sticks; also use nama shoyu or tamari soy sauce to give the dish a little more heft.

For this or any brown rice salad, stop by a Chinese restaurant and pick up a couple of containers of cooked brown rice.

The flavors of this salad are modeled on kung pao, the popular dish in North American Chinese restaurants. If you want it even more fiery, up the red pepper flakes to 2 teaspoons.

Cooked rice is prone to a type of food poisoning from bacteria found dormant on the grains. Some rice salads are safe because the added vinegar keeps the bad bugs from coming to life and interfering with your fun. But always err on the safe side: Refrigerate cooked rice salads quickly after making.

Bags of dried Chinese black mushrooms have shown up in even run-of-the-mill supermarkets these days--although they're available in copious supply at Asian specialty markets and from online suppliers. They make an excellent pantry staple; a quick mushroom stock is no more than 20 minutes away after soaking them. However, they can be sandy or gritty; you may need to strain that stock through cheesecloth. And the mushrooms themselves can fall victim to rot after long storage. Always inspect them before you use them.