How to carve your turkey, and pick the right knife to do it

by David Leite
Listen: How to carve your turkey, and pick the right knife to do it
07:53 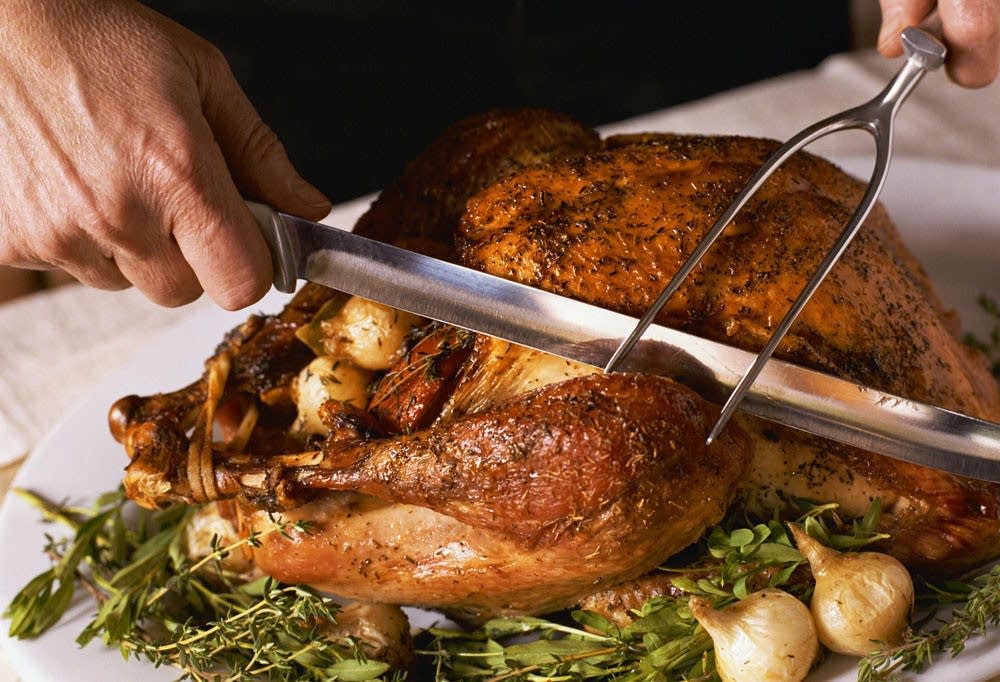 Selecting and cooking a turkey is one thing. What we forget here is the most important instrument in getting that bronzed behemoth onto the platter in perfect slices.

The carver. Not the person, but the knife he or she holds. This tool that shows up once or twice a year is a special breed of blade. Its shape, balance, honing and thickness are created to do one thing brilliantly: ready slices of the great bird for their closeup.

We talked to Corey Milligan of New West Knifeworks in Jackson Hole, Wyo.

David Leite: Let's talk about this neglected child of the knife block. Exactly what is a carver?

Corey Milligan: Well, a carving knife is a knife that's designed for cutting up and slicing meat. Today, we mostly use it to cut up turkeys, but throughout history it was used to cut up any large piece of meat.

DL: What about the shape and the balance of the knife makes it unique?

CM: The carving knife of today is about 8 to 10 inches long. It has a relatively thin blade -- both in the thickness of the steel and the width of the blade. It also has a point.

You see some slicing knives that are rounded on the end. They are not ideal for carving meat. You definitely need a point to work around joints or cut off legs of turkeys, for example.

DL: And a carver can be used for carving any meat. There is not a specific turkey carver, right?

DL: We've been a meat-eating species for as long as we've been a species. When did the carving knife really start coming into to play?

CM: The real heyday of the carving knife was in the European Middle Ages, right on up to the Victorian Age. In those times, it was only the very wealthy who could afford to eat large pieces of meat. So sitting at the table and carving meat for your guests was really a symbol of wealth and sophistication. I recently read a book called Honors of the Table, written in 1791 to teach young people about proper manners while dining. One-third of the book was dedicated to the art of carving meats.

DL: What are some of the most salient points from back then?

CM: On the list of carving rules from 1790: There was to be no standing while carving was done. Instead, hosts were advised to invest in a seat lofty enough to allow them to wield their blades from a commanding position.

Another: Under no circumstances should the head of the household keep the best bits of turkey for themselves. And favoritism when handing out the choice cuts was always frowned upon, unless a person of superior rank happened to be gracing the table.

The final one, which I think still applies today: We should not cut the slices too thick or too thin, and we should help our friends to gravy. It is also generally best to ask our friends what part they like the best (white or dark meat).

DL: The question that comes up every year is, "How do you slice a turkey properly?" Enlighten us.

CM: The method that I and virtually every chef I've ever seen or taught is generally the same.

The first step is to remove the legs, including the thigh and the wings. That's best done by getting a good purchase on the end of the wing or the end of the leg and moving it around so you can really see where that joint is that meets the body.

Once you've pulled off the wings and the legs, the next thing to do is to remove the breast. It's really just done in two parts, the breast on each side. Take the tip of the knife and cut down between the sternum and the meat. And use your knife to stay as close to the bone as you can. Trace down the side of the sternum all the way and get the whole breast off. (A lot of times, you have to actually cut as far as you can down that way and then go under the bird and cut the breast off from the other side.

Take the breasts off of the carcass, put them on a cutting board. Slice them. What I see most chefs doing is slicing across the grain of the meat. Think of the breast as running from the head to the tail and slice perpendicularly to that.

DL: If someone is in the market to buy the perfect carver, what should they look for?

CM: I think it is very important that the knife be made of high-quality carving steel. I've seen carving sets that are made of either very stainless flatware steel or even silver; they're trying to be decorative, but you can't sharpen them and they don't hold an edge.

Something I've seen in steak shops are these grand carving sets from latter years. A lot of times they have a hammer handle with silver bolsters and they are just super cool. I think if you are embracing the traditions of days gone by, those are a great choice.

These knives are made from what we call carving steel, which is great for edge-holding and sharpening, but it's not stain resistant. So you need to take a little extra care with those. Make sure you wash them and dry off after each use.

DL: After the holidays are done, how do you store this carver?

CM: It's really important to put some oil on it. We're already in the kitchen, so the easiest thing to do is to use some vegetable oil or mineral oil. Really, anything but olive oil is fine. Rub the whole blade and the handle and every part of it.

Usually, such knives come in cases, so that's the way to store it. If not, wrapping it up in a towel is nice, to protect the edge.

But also, this: If you've got it, you might as well use it. Anytime you're cutting up meat, get it out, show it off a little bit, just put it in your knife block. You'll find there are lots of great applications for it.

David Leite is the publisher of the website Leite's Culinaria, which has won two James Beard awards. He is the author Notes on a Banana: A Memoir of Food, Love, and Manic Depression, as well as The New Portuguese Table: Exciting Flavors from Europe's Western Coast, which won the 2010 IACP First Book/Julia Child Award. Leite also won a 2008 James Beard award for Newspaper Feature Writing Without Recipes, a 2006 Bert Green Award for Food Journalism, and Association of Food Journalists awards in 2006 and 2007.
Classic English Muffins
Soul-Hugging Lentil Shepherd's Pie
Pancit Molo
Store-bought Chicken Stock Staff Tasting