The language of food photography is universal

by Lynne Rossetto Kasper
Listen: The language of food photography is universal
07:59 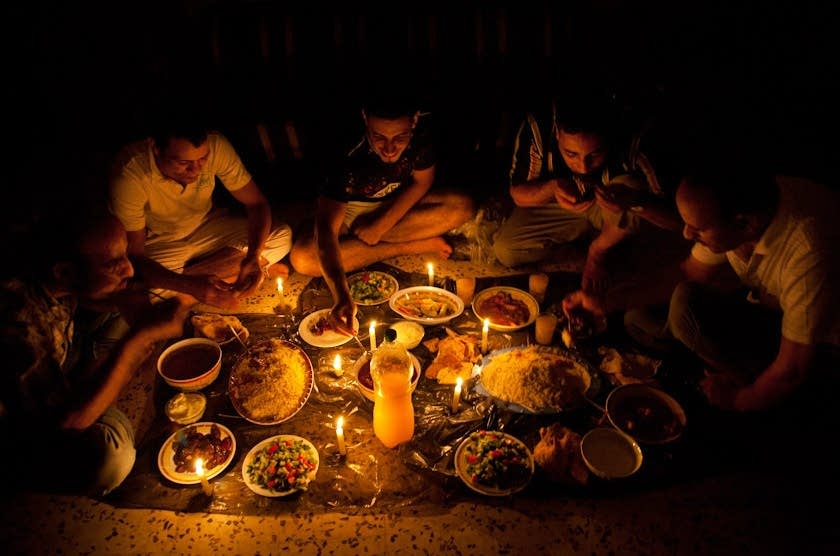 Food photographer Penny De Los Santos often takes a particular kind of picture. You see the food, but you also see and feel the people whose food it is. You get their place in the world. You feel like you can walk into her pictures.

De Los Santos is an award-winning photographer who works with National Geographic, Saveur, does cookbooks much more.

Lynne Rossetto Kasper: You recently did a TED Talk in which you describe a dinner you had flown thousands of miles to photograph.

Penny De Los Santos: It was an assignment for Saveur. I had an editor call me and say, "We have a story. You have to get there quickly. The access is very limited and the subject is pretty sensitive. So, we need you to get on a plane immediately." It was a food story during Ramadan, so I had literally one meal to photograph. I flew thousands of miles across multiple time zones to get to this place. I met a group of eight men who were all Iraqi refugees living in the bowels of Beirut, fleeing the war in their home country. They left their families, their lives. They left everything. And they would gather and celebrate and remember where they grew up. They would gather and cook these meals that their mothers taught them.

For them to be associated with me, a western journalist, was pretty bad. If it was revealed, they would've been deported. I would've been detained. It would've put their lives at major risk, so it wasn't an option. I couldn't be seen with them in public; I only had access to them in their apartment. And I had to shoot everything in the available light, because a flash bulb going off in a tiny apartment in the middle of this neighborhood, where there are watchmen on rooftops who look for any suspicious behavior, within minutes we would've been discovered and detained. So I had to be very careful.

It finally came to the moment the meal was happening. They hadn't eaten all day; they were fasting. They started to take these trash bags and line them like a beautiful canvas on the floor where they would share their meal.

I had already decided this was where I was going to shoot this photography. I was going to get up on this little stool and position myself perfectly. I was ready. They all started to gather, they were sitting, and all of a sudden the electricity went out. The entire region was completely black. In my mind, I thought, This is it, I'm done. This assignment is over and I'm officially never going to get another job from this magazine. Then, in the corner, I saw a group of men start to light candles and slowly line this dinner area with these beautiful candles. It lit their faces with glowing light, and it was more intimate and beautiful than I could have ever anticipated -- than I could have ever lit. I shot it with a really slow shutter speed, and it just said so much about community and intimacy and just it was the moment. It was the perfect moment to make that picture.

It kind of translated this incredible story about how food really connects all of us and gathers us together. And I remember shooting that picture and thinking, OK, now I'm going to sit with them, because there was no other way I could've ever been able to sit at that table. Not as a woman, not as a westerner, not as a journalist. And here I was with this group of men. And we didn't speak the same language at all.

LRK: But you really did, didn't you?

PDLS: We did. We shared this wonderful meal together. It was pretty incredible.

LRK: Is this becoming sort of emblematic of a shift in food photography? I'm wondering about the sensibilities that are happening now in this country about food. Is that starting to show up in the food photography that we see in magazines and on blogs?

PDLS: Without a doubt. I'm not seeing the reflection so much in publishing as much as I'm seeing it in online publishing. There's like 380 million photos uploaded on Facebook daily and most of those are with mobile phones. So I think the common language that we all have is what we are eating. I can't tell you how many food photographs I see from Instagram and Twitter daily.

If you photograph this amazing meal that you had somewhere in Italy and you post it on your Facebook page, I think more people can relate to that because it's food rather than politics. I don't think food polarizes people as much as other topics. I think it's the one language we can all sort of celebrate. It's something we can feel comfortable enough to comment on.

LRK: Why do you think we find watching people cook so fascinating? Whether it's television or online, it's amazing how compelling it is.

PDLS: I could not agree more. My mother, my brother and I have vivid memories of watching Julia Child cook. We were just mesmerized. My brother's a Star Trek fan, I'm all over the place and my mother is this first-generation Mexican-American. And we all related to watching this woman who had nothing in common with us except for she loved cooking.

I could photograph for hours. I could watch somebody stir a pot and talk about what they're putting in the pot, dicing the onions and sauteing. The subject matter is very engaging to me. I'm fascinated by how many people love to talk about food. I can't tell you how many conversations I've had in which I meet somebody and have nothing in common with them at all, and then they'll start talking about what they're making for dinner that night. And the layers just peel away. There we are on a completely different plane, having a real conversation. It's pretty amazing.