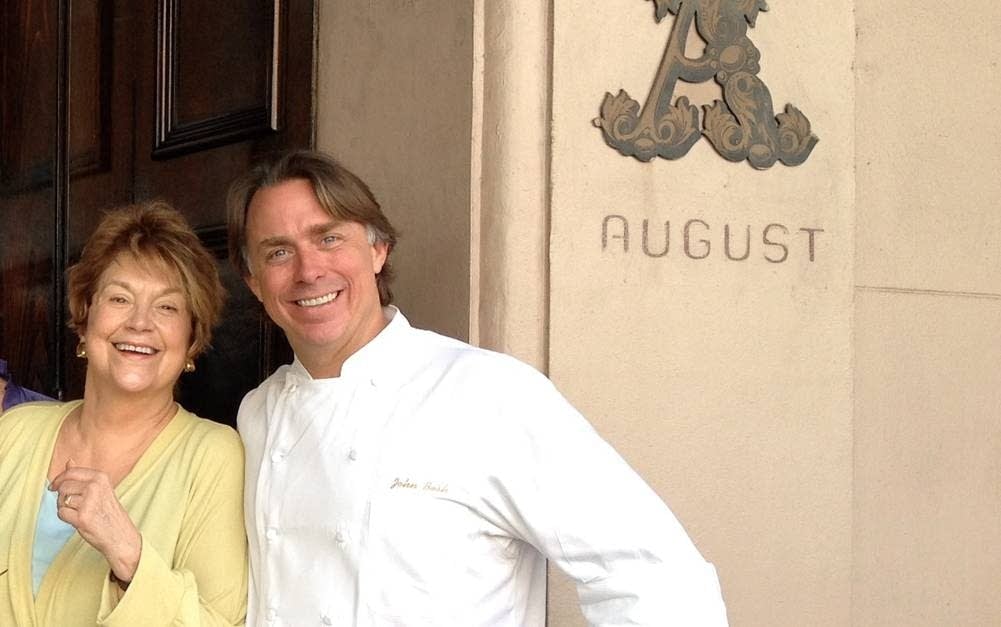 Award-winning chef John Besh is the force behind nine acclaimed restaurants. In this installment of The Key 3, the author of My Family Table: A Passionate Plea for Home Cooking shares with Lynne Rossetto Kasper the techniques behind three of his favorite recipes: Fried Egg Sunny-Side Up, Cream of Any Vegetable Soup and Risotto.

Here are John's keys, as told to Lynne:

Every cook really needs to know how to cook an egg, and it's something as simple as a fried egg, sunny-side up. Another important dish is a creamy vegetable soup -- just to know the basics of how to do this without using a lot of cream and just using what the vegetables give us naturally. Another is a good risotto. Risotto is so misunderstood. To make a good risotto takes a little bit of restraint and takes respect from the cook. I just love to do that, and I think every great chef needs to know.

When you take a beautiful farm egg that's been raised on this great diet and you do as little to it as possible and you cook it ever so gently sunny-side up, it would just be perhaps the tastiest thing you've ever had in your life.

I take a little chilled farmstead butter and rub it in a relatively liberal manner around a small cast-iron pan. I don't want the eggs to really spread out too much, and I'd like this to be a cool pan if possible.

What I want to do is crack an egg and place it over low heat. Not low low low; on the burner at your house, a medium-low to medium flame.

The beauty of this is that it's all about the egg, and it's all about the little smear of butter. I want the egg to coagulate really slowly, so I watch the egg whites slowly turn this opaque color. What I don't want is what my grandmother used to have happen in her cast-iron skillet: sizzle and pop. I don't want the eggs to start to caramelize. When carmelization takes place, it adds flavors that distract us from the creaminess of the white and the yolk itself.

It starts to bubble ever so slightly. That's when I move it to as low a heat as possible, because I want the whites to coagulate in the same time that it takes the egg yolk just to heat all the way through.

Finally, I take a little bit of sea salt and just give a small dash with my fingertips right over the eggs.

We started off and I had all these little canisters of spice this and spice that. We had various oils and creams and all these different goodies that we could add to the egg. But we're distracting it. This, I think, is cooking at its purest. It's something so simple.

2. Cream of Any Vegetable Soup

As a chef, you make money from the trimmings. You need to be able to make the most out of your vegetables, even if by using the trim alone. That's a little trick of the trade, and as a chef it's so very important -- the art of making this work financially as well as creating beautiful food.

I learned long ago (and it was in France) to create these beautiful, delicate soups without using a roux. A lot of soups down here in the south of Louisiana naturally are roux-based soups, and they're the old styles of browning the roux and letting that roux be the foundation and color.

I don't want to caramelize the onion by heating it over a high flame. I keep it relatively low for sweating, which is nothing more than cooking a vegetable so that it softens, releasing moisture that intensifies and sweetens the flavor.

I cover all the vegetables with chicken broth and add a little bit of cream. For the cream: no more than a third of the amount of chicken broth.

When you puree it, it will thicken the chicken, cream and vegetable broth in such a way it's almost like velvet on the tongue. You can serve this with just a tad of lemon juice.

The beauty of it is the simplicity again -- just taking a few meager ingredients and combining them in a way that respects the beautiful flavors. We're not over-cooking, and we're not adding too much to take us away from the beauty of the vegetable, which is the focus of the soup.

I grew up in a rice culture; we had rice with every meal. For big Sunday suppers, we would have rice, sweet potatoes, and even mashed potatoes. I don't think I appreciated the risotto until I spent a good amount of time in southern France, where my mentor was from. The love and appreciation that they had for the short grain rices was beautiful.

To create a great risotto means that you're really respecting the rice and not just throwing a lot of fat into a pan -- lots of this and lots of that, and stir stir stir, so that the rice breaks down into a starchy, gloopy mess. That, too often, happens to be the case.

I'll never forget the trend when I was coming up as a young chef in the '90s, when people actually made risotto that would stand up in the plate. There'd be forms that you poured risotto into, and when you removed the forms, the risotto would still be standing like a tower. It just isn't right.

Risotto should be eaten out of a bowl and it should be really simple. It's peasant food on one hand but so sexy and exquisite on the other. I love the fact that Arborio rice, which I think is probably the most common rice used for risotto, can be found in nearly every grocery store.

There's nothing better than a good rich chicken broth. I take the chicken -- and it has to be nice chicken, raised by somebody who you know loved them -- and season with salt and pepper, inside and out. I stuff them with cloves of garlic and massage with extra-virgin olive oil, then season the outside with hearty herbs that will perfume it as it roasts. It goes in a 375-degree oven for nearly an hour, until it's golden brown, if not mahogany.

Later, when you've carved off all the meat and everybody's enjoyed it, cover the carcass with water in a pot and add garlic cloves, an onion, a carrot and a stalk of celery. Bring it to a simmer for a good 1 hour-and-a-half to 2 hours and you've got the most beautiful broth. It's a light color, but it's rich with all the aromatics that went into the chicken, from the olive oil to the herbs.

Mushrooms could be added to the risotto. Porcinis could be added halfway through, and we could add truffles at the very end. The rice will only absorb the essence of what it is that you add to that pot. If you do it right, you'll end up with each grain of rice being nice and plump and soft, but at the same time having a slight bite.

At the very end, I stir it to incorporate some cheese and a little touch of butter. Stirring releases some of the starches that weren't released when the rice was washed, but these starches will break down and give this gorgeous creamy texture to it. One of my favorite things to do is add one big dollop of whipped cream -- just good fresh cream that's whipped -- and I'll add that at the very end. If you can shave some beautiful truffles over the top, you've really got something there. But the rice alone is worth making.