A former chef who has won numerous awards for her books and magazine writing, Sally Schneider is the creator of the lifestyle blog The Improvised Life. In this installment of The Key 3, she shares with Lynne Rossetto Kasper the techniques behind three of her favorite recipes: Tuscan Herb Salt, Fool-Proof Roast Chicken and Essential Bittersweet Chocolate Cake for Improvising.

Here are Sally's keys, as told to Lynne:

Tuscan herb salt is the preparation I find myself using the most. It's fast, it's easy, it's endlessly useful, and there are lots of ways you can improvise with it.

I crush a clove of garlic with the side of my knife to pull the skin off easily. The garlic doesn't need to be preserved in good shape because it will be squashed. I'm going to remove the green sprout because it can be a bit bitter.

You could use sea salt, but I love kosher salt because it's a uniform texture and it's not really strong, which allows the flavors to come through more. I use a low amount of salt because I want to pack in the flavor of the herbs.

I chop the garlic with the salt to make garlic salt, which is the first step. Salt is a preservative and the garlic is in the open air. If I leave it overnight, by morning it will be completely dried out, preserving the garlic. This is not your ordinary garlic salt; you could use this on popcorn or toss it into a saute of vegetables.

If I spread it out on a sheet pan, it will dry and the whole apartment will smell like these herbs.

I use this instead of salt, basically. I don't use dry herbs much anymore; I just use this stuff, which I have in my spice drawer. And the lesson in it that I love is that salt is really a carrier of flavor. It will wick the flavor into the food and infuse it with the flavor.

A variation on this is that you could make an Herbes de Provence salt and use it the way my brilliant friend Ellen Silverman used it in my chocolate cake. She decided to replace the salt in the cake with an Herbes de Provence salt (it had no garlic in it; it was just the herbs), and it was sensational and a complete surprise. It's this little kind of undertone of herbs backing up the chocolate, which was fabulous.

My boyfriend learned to cook when he met me. When he was able to make a roast chicken, he felt completely empowered because he could serve it at a dinner party and know that he had made one of the world's most classic dishes perfectly.

When I was working in restaurants, we slathered chickens with butter before we roasted them. That was the key to the crisp skin. This one does not do that.

My idea for the technique was sparked 20 years ago while reading Marcella Hazan in bed. She had a recipe for a chicken roasted with lemon in the cavity.

She also turned the chicken breast down to start, which is a bit of chemistry, I think. (Food scientist Harold McGee will probably tell me my logic isn't true.) But what I think happens is the juices of the chicken flow to the breast while the flesh is beginning to set. Then you can turn it over and brown it and avoid the possibility of having a dry breast.

I only put one lemon in the cavity. Early on, I was really into French cooking and I used to tuck tarragon leaves under the skin as they do in France. Now I use the herb salt. You throw it on there, put the lemon in and take a toothpick to just close up the cavity. I found that, just putting it breast side down, the skin stuck to the pan. So I would take a little square of aluminum foil and butter it and put the breast on that. That solved it.

The result is crisp skin, which of course is essential, and a ton of juices from the chicken. I mean, it's as though they came from heaven or something because chickens aren't usually that juicy. You have an automatic sauce right there, but you can also make a pan sauce with the juices. I put the bird on a platter and tilt the juices into a measuring cup. Then, let the fat rise and skim it off after a few minutes. And then those juices are perfect, or you can throw them back in the pan with some white wine and scrape up the brown bits.

Everybody should know how to make a really good chocolate cake. And most people I know are terrified of making a cake, period. So I thought, let me take a look at chocolate cakes and see if I can come up with a recipe that is again fool-proof, because succeeding in these things and having them be easy allows us to do them frequently. Also, I wanted a cake you could improvise with. You could take it somewhere and make it your own.

So think France. Think the classic kind of cake you would be served, which is about 8 or 10 inches in diameter, 2 inches thick. A flat, round cake. Very classic looking, right? You get a wedge of it and it's very dense, and you know you're going to be blasted happily with chocolate. That's what I wanted.

The big secret here is that a brownie is really a chocolate cake. You invest in great chocolate, you make the usual brownie recipe, which happens in 10 minutes, and you bake it in that classic layer-cake pan (as the French cakes are), and then you turn it over when it's done and it's cooled. You dust it with cocoa -- really good cocoa -- and put a split vanilla bean in. Then it will taste like the $10/pound cocoa. I put vanilla beans in my cocoa.

The beautiful thing about this cake is that you can monkey around with the flavors. This is where you can get really subversive, which I love. One day, I wanted to make this cake, but I didn't have enough of any of the ingredients, especially of the butter. So I put in some rendered bacon fat (one part bacon fat to three or four parts butter), and I baked them in little ramekins. I didn't even have enough to fill a cake pan, but I needed to take it to a dinner party. And I served these little individual gateau. The bacon fat smoke just boosted the chocolate in a way that was unbelievable. The trick is to underbake it slightly.

Now the beauty of this batter is that if you take out half of the flour and add in a little more sugar, you have a sublime cookie -- a little round disc of chocolate that is both chewy and crunchy. They freeze beautifully.

You can also make these things called chocolate planets if you take that same batter and pack it full of M&M's or nuts or dried fruit. You throw any of those things in the batter and glob it onto a cookie sheet.

This is just one batter, but you can see all the different ways to blow somebody's mind. 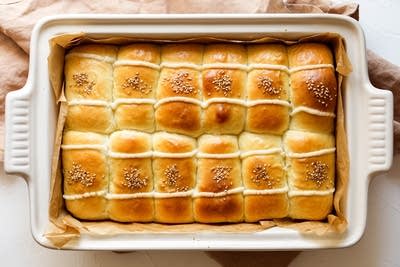