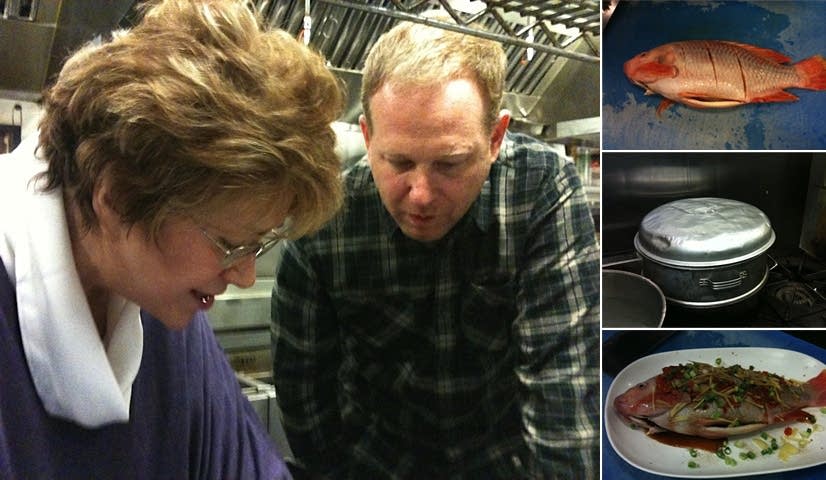 Andy Ricker is an expert in Thai cuisine. He owns restaurants in Portland, Ore., and New York under the Pok Pok umbrella. In this installment of The Key 3, he shares with Lynne Rossetto Kasper his recipe for steamed fish, as well as his techniques for perfect jasmine rice and boiled eggs.

Here are Andy's keys, as told to Lynne Rossetto Kasper:

In America, we don't seem to steam food very much, but it's one of the great techniques of cooking. In Asian cuisines, steaming is very, very important and probably as popular as frying or baking.

If you visit a typical home kitchen in southeast Asia, there aren't a lot of appliances. You might just have a single charcoal burner or a single gas burner. So to prepare a meal, you're either making one thing at a time or working in layers. When you're steaming, you can cook a whole meal on one stove at one time. You can have your fish in there and maybe something above it in another tray and then maybe something wrapped in banana leaves above that. You steam it all at once.

The first thing you do is get a nice hot steamer going. We typically use a Chinese-style round steamer, but you could use just a pot with a rack in it.

Score the fish every inch, from back to belly, down to the backbone. Then place it on a plate that will fit inside your steamer. Pour the remaining ingredients directly on top of the fish, making sure to distribute evenly.

Turn the steamer on to a hard boil. Put the fish in and cook about 12-15 minutes, depending on size. Sprinkle with chopped cilantro and serve. The sauce should be sour, salty, a little sweet and as spicy as you want it to be. Adjust to taste using the ingredients in the recipe.

Rice, in general, is the basis of all Thai cuisine. Food is almost always eaten with rice, and it's more important than any other aspect of Thai cuisine.

Jasmine rice is a variety that smells faintly of jasmine, but there's no actual jasmine in it. It's just some sort of compound in the rice.

You want to be gentle with the rice. Wash it with cool tap water in a colander set inside a mixing bowl. Swirl the rice with your fingers and change the water about three times, until the rinse water is fairly clear. Let all the water drain out and transfer to a rice cooker.

Next, measure a ratio of rice to cool tap water that is approximately 1 cup of rice to 2 cups of water. Or, there's a trick you can do: Put the rice in the rice cooker. Then, while touching the tip of your index finger to the top of the rice, add enough water to reach your first knuckle. It'll about an inch above the rice.

If you're cooking in a pot, bring it to a boil, then down to a medium-low simmer. Cover. Otherwise, turn on the rice cooker. There's no reason not to use a rice cooker. Rice cookers are easy, cheap and everybody in Asia uses them now.

One more trick: When the rice is done cooking, allow it to sit in the rice cooker for about 20-25 minutes with the lid on. This allows it to cure. (In a pot, just pull it off the stove and let it sit.) Some of the steam dissipates and it gives each individual grain of rice the chance to form its own little world. It keeps the rice from being too sticky or too mushy.

Fluff lightly with a rice paddle so the grains are separated and fluffy. It should be aromatic. It should not be dry or clumpy.

Typically in Thailand, the rice is the centerpiece of a meal -- if not literally, at least figuratively. You might have the rice cooker in the middle of the table and everybody helps themselves. Or the pot might be next to the table, with several main dishes in the center.

It's common to have an array of dishes instead of just one. You might take each one a tablespoon at a time and set it next to the rice. If you dump it right on top, then you've made the rice taste like the main dish and you've lost that clean rice flavor. People eat a lot of rice and a little bit of the other things. The rice is the majority of the meal.

To me, the egg is kind of the perfect food. You don't have to do much to it; it's very versatile. You can make it into a lot of different shapes and textures. A perfectly boiled egg is good for breakfast, in a soup, on top of rice or as a snack.

Always start with room temperature eggs. This is important. When we drop them into the boiling water and start the timer, we know that it's always going to come out with the same consistency. It ensures proper doneness.

If you start at room temperature, you know that at 4 minutes you get a soft-boiled egg with a runny yolk. At 6 minutes, it's runny in the center and starting to get molten. What we like to use are 8-minute eggs, which are set, almost molten and custard-like. The whites are a beautiful, soft, translucent consistency. They don't get chewy.

Bring a pot with plenty of water in it to a boil, adding salt. When at full rolling boil, set your timer for 8 minutes and add as many eggs to it as you want -- all at the same time using a spider or colander.

When they're cool enough to handle, peel and eat. The yolks should be just set but still soft.

Also: We age the eggs. We get them in from the farm and let them sit for a week before we cook them. It makes them easier to peel after cooking. The white starts to collect itself and no longer sticks to the shell.

There's a dish called Khai Luk Koei (Son-In-Law Eggs), in which you boil and peel the eggs and then deep-fry them -- without breading or anything. It gives them a nice crispy crust on the outside. Then you slice them open and put a sweet tamarind and chili sauce on the top. They're eaten as a drinking snack.