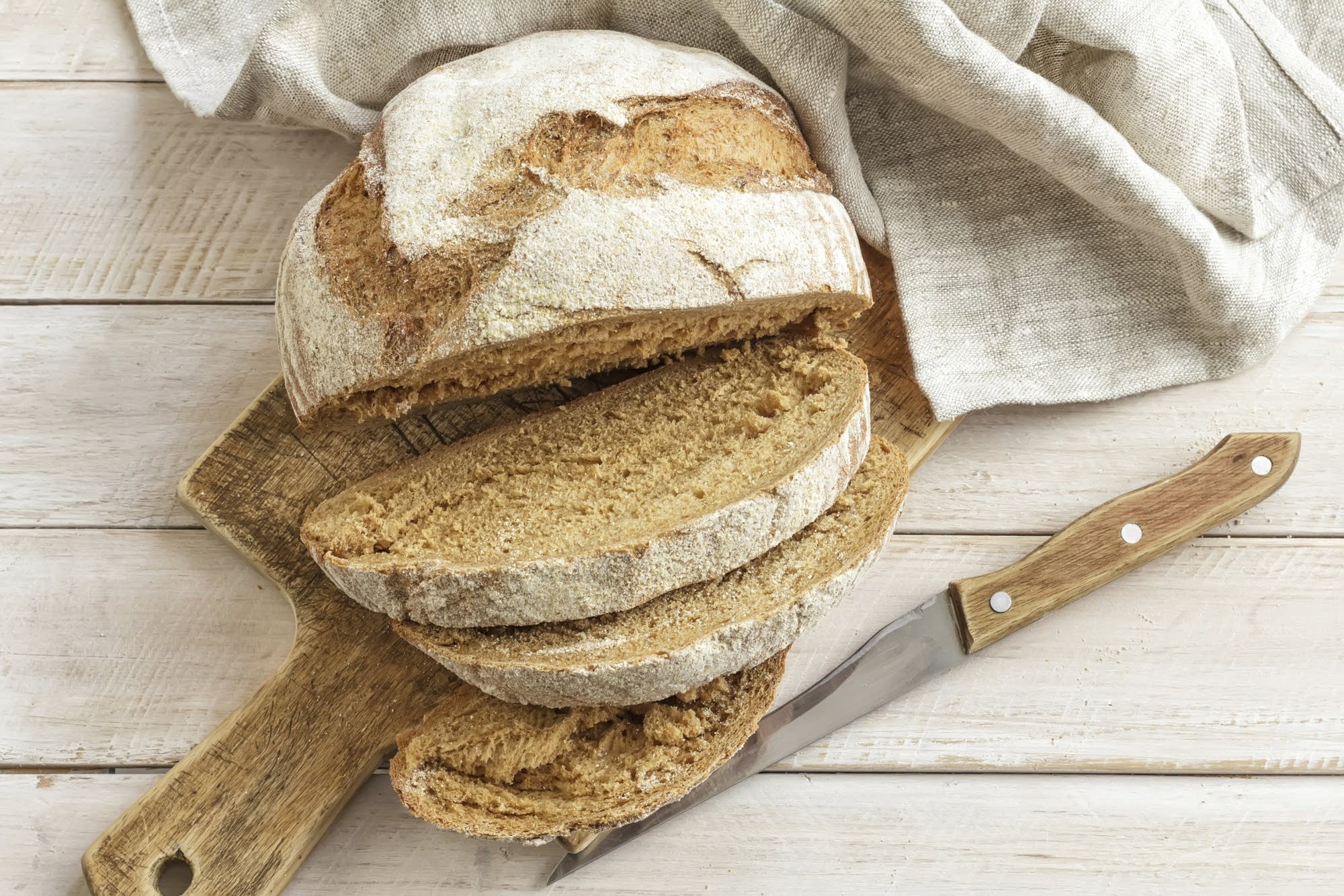 "Bread is best stored at room temperature, either cut-side down on the counter or in a paper bag. Never store bread in plastic bags--you'll make the crust spongy and it will become moldy more quickly. And if you've baked too much, remember: Yesterday's bread makes tomorrow toasts or croutons.

If you find that you've made more bread than you can eat within two or three days, wrap it in a plastic bag and freeze it. Note that smaller breads, baguettes and rolls, freeze less well than boules and sandwich loaves. Thaw frozen loaves by removing them from their freezer wrapping and allowing them to stand at room temperature for a few hours--microwaving will spoil the texture. Once a loaf is thawed, you may want to heat it for 3 to 5 minutes in a hot oven to crisp up the crust. Ordinarily, I don't like oven-warmed bread, but loaves that have been frozen seem to benefit from the crisping process. Never store bread in your refrigerator. Science tells us that the staling process takes place faster at the cooler temperature ranges of a refrigerator."

"I don't want to sound too much like your mom here, but in cooking--and especially in baking--it's easier to clean up after yourself as you go. One tip: Rinse first with cold water, then switch to warm. Why? Warm water melts the dough and makes it sticky and hard to clean off. Also, avoid using plastic scour pads--once dough gets caught in the holes, and it will, the pads will never come clean again."

On sourdough starter that is too sour

"Many people assume that because I like strongly flavored sourdough bread, I must really love sour bread. The sourer the bread, the better, right? Wrong. Overly sour bread has a flavor that zaps the back of your tongue when you eat it, a flavor that dominates all components of the bread, especially the subtle taste acquired from the age of the loaf. Rye bread is the only exception: The flavor of the rye and a good sour flavor are a well-balanced marriage.

I've had more than a few people proudly tell me that they've left their starter for several weeks without feeding so that it could acquire extra sourness (each time you feed a starter, you not only nourish it but tame the funkier aspects of the fermenting liquid). But when I taste these starters, they have an awful flavor.

What's more, an overly sour starter is weak in leavening power. It produces undesirable acidity, which in turn produces an undesirable flavor, almost a sign of illness. It's as if the starter is so weak from lack of flour refreshment that it has the strength neither to make the dough rise to its full potential nor to fight off the bad flavors. This is why a sour-tasting starter doesn't always make a good sour-tasting bread.

As long as you give a starter regular feedings, you shouldn't have to worry about it becoming too sour or too weak. Think of a bell curve graph; a starter is at its optimum strength and flavor 8 to 12 hours after it's fed, and drops off considerably in quality beyond that range.

Harold McGee, in his book On Food and Cooking, points out that starters that have been well maintained for decades are resistant to contamination, possibly because of some sort of penicillin-like antibiotic action."