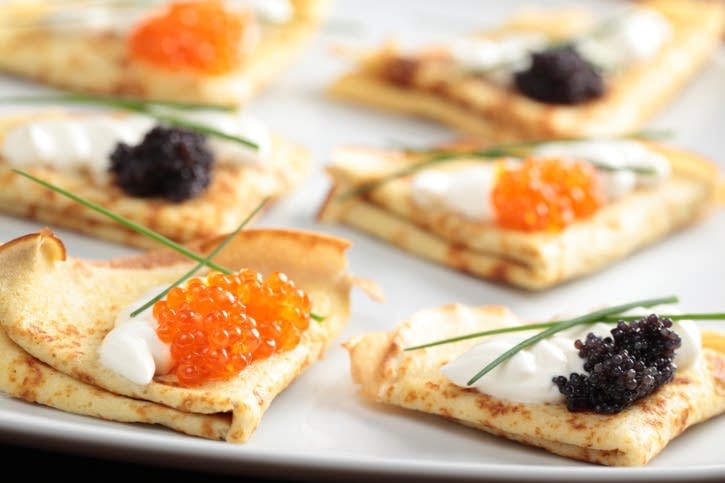 Blini are the pride of the Slavic kitchen. Real Russian blini are the diameter of a saucer, never cocktail-sized. They are best fried in a well-seasoned cast iron skillet.

For Serving: melted butter, sour cream, at least two kinds of smoked fish, caviar if you wish, and strawberry jam.

Make the sponge: In a large mixing bowl, stir together the yeast, water, and sugar and let stand until foamy, about 10 minutes. Whisk in the flour until smooth. Place the sponge, covered, in a warm place until bubbly and almost doubled in bulk, about 1 hour.

Into this sponge, beat in the milk, butter, 2 1/4 cups of the flour, egg yolks, sugar, and salt. Whisk the batter until completely smooth and set to rise, covered loosely with plastic, until bubbly and doubled in bulk, about 1 1/2 hours. Stir the batter well and let rise, once more in a warm place, covered, for 45 minutes. Beat the egg whites until they form soft peaks and fold them into the batter.

Pour some oil into a small shallow bowl and have it ready by the stove. Skewer a potato half on a fork and dip it into the oil. Rub the bottom of a 7-inch cast iron skillet or a heavy non-stick pan with a long handle liberally with the oil. Heat the pan over medium heat for 1 1/2 minutes. Using a potholder, grip the skillet by the handle, lift it slightly off the heat and tilt in toward you at a 45-degree angle. Using a ladle, pour enough batter into the skillet to cover the bottom in one thin layer (about 1/4 cup). Let the batter run down the skillet, quickly tilting and rotating it until the batter covers the entire surface. Put the skillet back on the burner and cook until the top of the blini is bubbly and the underside is golden, about 1 minute. Turn the blini and cook for 30 seconds more, brushing the cooked side with a little melted butter. If the skillet looks dry when you are turning the blini, rub with more oil.

Repeat with the rest of the batter, greasing the pan with the oiled potato before making each blini. Slide each blini as it is made into a deep bowl, keeping the cooked blini covered with a lid or foil. Serve the blini hot, with the suggested garnishes.