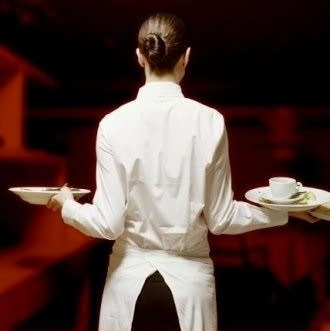 This week it's a peek into the life of a waiter at one of the world's most demanding restaurants. It's a profession and high craft, and not for the faint of heart. Our guest is Phoebe Damrosch, former waiter at Chef Thomas Keller's acclaimed Per Se in New York City. Phoebe tells all in her book Service Included: Four-Star Secrets of an Eavesdropping Waiter.

The Sterns are at Grove Café in Ames, Iowa, where they're forking up pancakes true to their name-huge, pan-size disks of thick and fluffy deliciousness.

Cheesemonger Steve Jenkins is back with a look at the cheeses of the Pyrenees. Improvisational cook Sally Schneider talks the theory and practice of meat loaf and shares her recipe for Lamb Meat Loaf with Cumin, Coriander and Fennel.

Pierre Laszlo, Professor Emeritus of chemistry at the University of Liege in Belgium, tells the story of what happened when a group trying out Utopia in California wrote a letter to the USDA. Professor Laszlo wants us to try his recipe for Tarte au Citron from his latest book, Citrus: A History.

Streit Matzo, the last family-owned matzo factory in the country is moving from its long-time home on New York's Lower East Side. Fourth-generation family member Aaron Gross explains why.