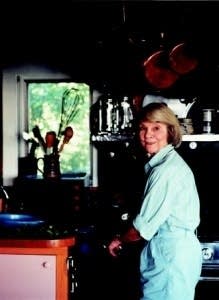 This week we're going inside the process of how exceptional cookbooks are brought to life. Our guide is Judith Jones, often called the cookbook editor's editor. Forty-some years ago she discovered Julia Child. In the ensuing decades Judith's influence changed the American cookbook forever and her authors became a "who's who of food."

It's camp for the Sterns—roadfood style—at Mike Linnig's Fish Camp in Louisville, Kentucky. Our master of the wine bargain, Joshua Wesson, talks second labels, the hidden deals from world-class vineyards. We'll take a look at the delicious and the deadly when we go to the Fungus Festival in Santa Cruz, California.

New York Times writer Kim Severson brings us chocolate with a passport; and Mark Kurlansky, author of The Big Oyster: History on the Half Shell, talks the bivalve mollusk's golden age in New York City.