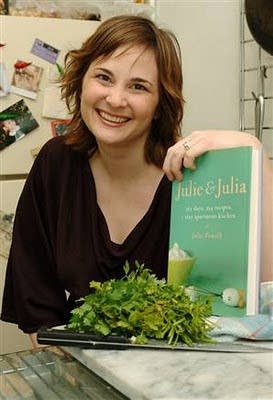 At 29, our guest Julie Powell was stuck in a mind numbing job and feeling defeated, aimless and depressed. In one eureka (some would say deranged) moment she decided that her salvation may lie in cooking her way through Julia Child's Mastering the Art of French Cooking. She set out on August 25, 2002; a year later she emerged, battered but with her psyche intact and her soul renewed. Her book, Julie & Julia: 365 Days, 524 Recipes and 1 Tiny Apartment Kitchen, is the chronicle of her journey as well as a tribute to Julia. Julia Child's Leek and Potato Soup is a classic.

It's divine lemon ricotta pancakes and homemade peanut butter for the Sterns at Hell's Kitchen in Minneapolis. Beer guy Steven Beaumont talks his favorite innovative beers from wild and wacky brewers who like to fly outside the flock. We'll head out to an Iowa farmhouse where a French woman cooks to her own drummer. It's communal suppers with a message at Simone's Plain and Simple.

Tea authority Bill Waddington warms us up with the forgotten teas: neither green nor black, they're oolongs. If tea isn't for you, warm up with an haute take on the ultimate comfort in a cup: Mocha Voodoo from Hot Chocolate by Michael Turback.