Email thisShare on FacebookShare on TwitterPin it!Share on Tumblr
Listen: Supersize Me
00:00 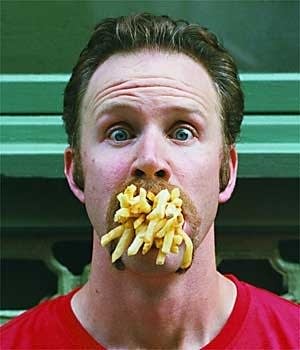 "We're fat, we're sick, and it's all your fault!" was the essence of a lawsuit brought by two teenagers against McDonald's. They denied it. Filmmaker Morgan Spurlock set out to find the truth by eating three meals a day for a month at the Golden Arches and documenting the process in his movie Supersize Me. He tells us what he learned.

Gourmet magazine executive editor John Willoughby, co-author of How to Cook Meat, talks cuts of lamb kindest to our wallets, and shares his recipe for Grilled Lamb Shoulder Chops Greek Style. Novelist Eleanor Lipman muses about building great literary character at the table. Her latest novel is The Pursuit of Alice Thrift.

Tucker Shaw, author of Flavor of the Week, tells of photographing everything he eats in 2004. By year-end he expects to have about 2500 pictures representing the good, the bad, and everything in-between in one man's diary of a year eating in New York City.