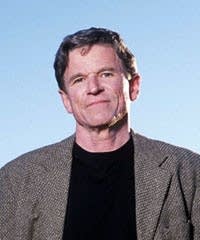 Paul Dolan, president of Fetzer Vineyards and author of True to Our Roots: Fermenting a Business Revolution, has made some unconventional changes at one of America's most successful wineries. We'll hear how this big producer is practicing what usually works only on a small scale. It could be the new way of wine. The Sterns settle a meat pie debate at Cousin Jenny's Gourmet Cornish Pasties in Traverse City, Michigan, and Lynne weighs in with her take on the meal in a crust: Pizza Rustica.

Gourmet magazine's John Willoughby talks that Asian classic, Steamed Sticky Rice, and David Rosengarten wants us to try veal breast, an inexpensive and overlooked cut. His recipe for Confit of Veal Breast is a good place to start. Mary Stuckey reports on the happy return of abalone, and Lynne takes your calls.