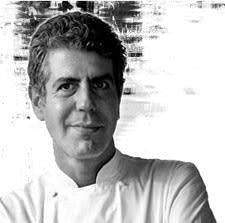 Chef and author Anthony Bourdain described his first book, Kitchen Confidential, as an "obnoxious and over-testosteroned" account of his life in the restaurant business. Still, the book remained on the New York Timesbestseller list for weeks. Now the food world's outrageous bad boy is at it again with his new book, A Cook's Tour, the chronicle of his planet-circling jaunt in search of the ultimate meal. Mr. Bourdain likes his adventure with a generous dose of risk and an occasional touch of the bizarre—like dodging Cambodian minefields to have cocktails in Khmer Rouge territory and eating poisonous blowfish in Japan.

By comparison, the normally over-the-top Jane and Michael Stern are simply eating pie at the Coffee Cup Cafe in Sully, Iowa. Steve Jenkins returns to talk about goat cheese, which inspired Lynne to create a recipe for Aged American Goat Cheese with Salad of Honey-Piquant Greens and Apples. Reporter Scott Haas checks out the secret of Belgium's sensational frites, we'll hear from a dairy farmer who practices Reiki on his cows, and Lynne shares her mail-order source for exquisite dried fruits for holiday gifts.