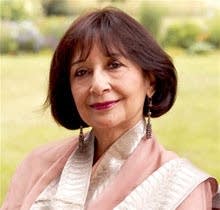 Her father wanted her to be a diplomat. She had other ideas. We'll hear the story of how two passions came together to define the life of legendary cook and actress Madhur Jaffrey. You've seen her in Merchant-Ivory films as well as her own productions, and her books introduced Americans to authentic Indian food. Her latest work, Madhur Jaffrey's Step-By-Step Cooking, takes readers from India to Thailand, Indonesia to Malaysia, and has her recipe for Lamb Cooked in Dark Almond Sauce.

A sign at a LaGrange, Texas, gas station alerted Jane and Michael Stern to the top-notch kolachkes at Weikel's Store and Bakery. We'll stop by a four-star restaurant near "ground zero" in New York to find out how the workers are doing and get the recipe for Chicken Breasts Stuffed with Curried Couscous, a staff favorite from Chef David Waltuck's book Staff Meals from Chanterelle. Tea merchant Bill Waddington talks scented teas, Phil Silverstone has tips for finding good cheap wine, and Trish Telesco helps us prepare for Halloween with the recipe for Rose Geranium Punch from her book A Kitchen Witch's Cookbook.