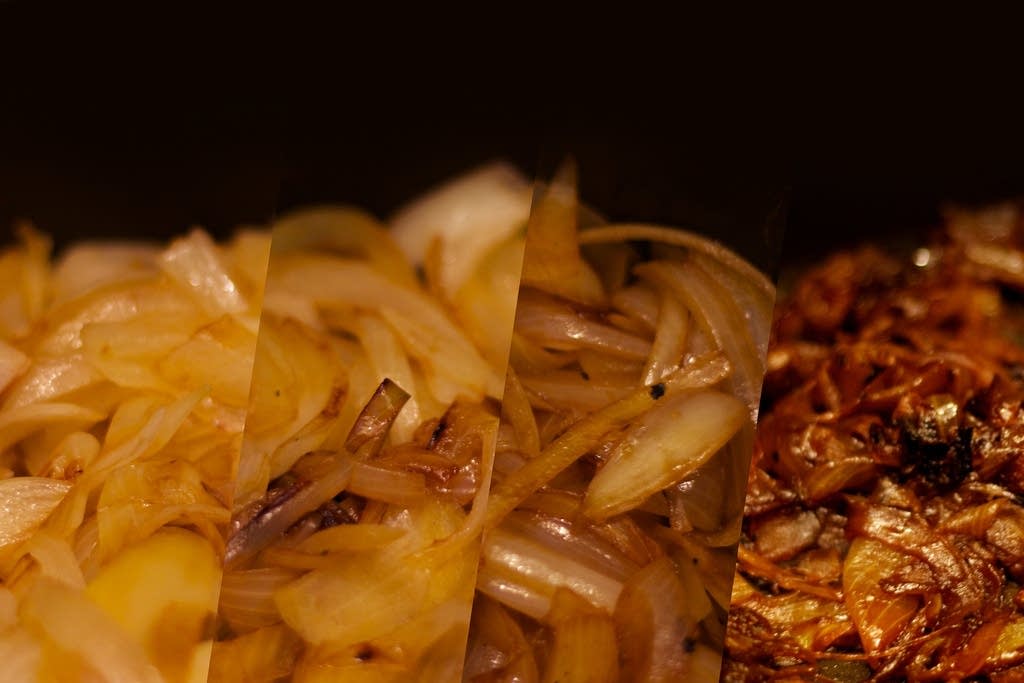 In his career as a writer, editor and critic Tom Scocca has sharpened his sword on lazy media and skewered hypocritical politicians. But what he says might be his most important journalistic work came when he took it to recipe writers. Seemingly every last one of them has been lying to us about onions – in particular, caramelized onions. Host Francis Lam talked with Scocca about his fight against the onion cooking conspiracy. When you get your onion browning technique perfected, give this recipe for Caramelized Onion Dip with Feta, Spinach and Walnuts a try in your kitchen.

Tom Scocca: The problem with onions is that it takes a long time to caramelize them. It takes so long to caramelize them that recipe writers throughout the years got into the habit of pretending it didn't take that long. A lot of the times when you're reading recipes, they’ll tell you that if you put onions in the pan and take 10 minutes or so, you'll have nice golden brown onions. It's just not true. Among the people who write the recipes, they think of this as a little fib that helps you get through the day. The recipe that finally set me off was one in The New York Times for savory scones with caramelized onions. I think it said that with 10 minutes of cooking you'd have caramelized onions to toss in your scones. I understand the urge to say that in your recipe because it feels like it shouldn't take more time to make the caramelized onions that make your scones have a caramelized onion flavor than it does to make the scones themselves. There are certain falsehoods that everyone understands are falsehoods – like the speed limit on the Jersey Turnpike is 65 mph.

FL: It's a polite fiction.

TS: Everybody understands that there's a speed limit, but people drive how they drive. Recipe writers don't understand that people who are reading recipes often don't know how long it takes to caramelize onions.

FL: Let’s talk about caramelized onions. It's part of your original story in Slate [Ed. Note: see article “Layers of Deceit”]. You’re saying even “10 minutes” is generous because you're seeing lots of recipes where it says “Cook the onions for three minutes until golden brown.” You took out your stopwatch, started cooking onions and timing them, recipe by recipe. What is your version of the events here?

TS: I was trying to do it in the most charitable way possible – on very high heat, but on your standard apartment kitchen rig. The whole point is trying to replicate what you might do if you're reading a recipe in the newspaper. And if I crank the heat all the way up and stirred – and never took my eye off the pan – in about 29 minutes was when I got something that was caramelized onions.

FL: There might be definitional problem here, where we talk about caramelizing the onions as a very broad term. But the kind of caramelized onions you're talking about – which I believe are the true caramelized onion – is an onion slow-cooked until it turns truly brown, the color of caramel. It means you've cooked it for a long time so that the sugars and juices have had time to come out of the onion and do the thing that we do when we caramelize sugar, which is turn brown. That takes a long time. But we just use the word “caramelized” to mean any shade of brown anywhere along the line. If people were talking about sautéing or sweating the onions, now they're improvising their language. Might that be the issue?

TS: Certainly not in the recipe that set me off. And I think in general – no. Yes, there's this particular long slow process, but that long slow process produces a particular thing. If you're making savory scones you want a sweet brown, soft onion in there. You don't want a lightly sweated, crunchy onion. That’s not the product. When I first reacted to this I was reacting as someone who had put in enough time in the kitchen to know that if I were cooking something and it told me I was going to take 10 minutes to caramelize some onions and I spent 10 minutes cooking, I would know that I didn't have caramelized onions in my pan and I would keep going. I would know what I was trying to end up with.

TS: But after I wrote this I heard from people – and I still hear from people – who didn't have that background knowledge when they ran into these kinds of recipes. You have people coming away believing that they don't know how to cook. They must've screwed something up.

FL: I failed, not the recipe.

TS: Right. People believe this and that's pretty messed up, especially newspaper recipes which are supposed to be reaching out to people who are maybe going to try something they never tried before.

FL: That's the damage. Are there other culinary untruths that you want to take on at this point?

TS: That's pretty much the one that haunts me – besides the fact that everybody fetishizes San Marzano tomatoes! You keep finding San Marzano tomatoes that have spice powder in them. You should never use something that has spice powder in it. You’re better off with just a regular Hunt’s tomato then with something that has factory oregano in it. That's about all I got.