The differences between cow's milk and goat's milk

by Sally Swift and Molly Birnbaum
Listen: The differences between cow's milk and goat's milk
05:30

Sally Swift: I have heard rumors that you were stomping around rural Massachusetts looking for raw milk. What were you up to?

Molly Birnbaum: My colleague Dan Souza and I were running around rural Massachusetts looking for raw milk because we wanted to illustrate the difference between goat's milk and cow's milk. We've been seeing goat's milk all over the place. It's in normal supermarkets alongside cow's milk, but it is very different. We wanted to really show how it is different.

We decided to go for raw milk -- which we found at small farms in Massachusetts -- so that pasteurization wouldn't be an element in our crazy America's Test Kitchen test that we then did.

SS: What did you discover?

MB: Goat's milk and cow's milk are very different. Goat's milk, first of all, gets its flavor from the presence of short- and medium-chain fatty acids. These are fatty acids that give the milk its particular flavor. It's that grassy, goaty, earthy flavor that you get mainly when you are eating goat cheese. It's very different from cow's milk. We, as humans, are super sensitive to these fatty acids; we can detect them in concentrations as low as 5 parts per million.

MB: It really is. It's very different. It has a different flavor.

There are other things that really separate these two milks, and one of them has to do with fat. Goat's milk doesn't flocculate. Flocculate has became one of my new favorite words in all of English language. What it means is that when you have a fresh container of cow's milk and you let it sit, the cream will rise to the top. That's flocculation. Goat's milk doesn't flocculate -- the cream will not rise to the top.

SS: So it essentially stays mixed?

SS: How do the differences between these milks carry over to their cheeses?

MB: We decided to illustrate the difference by making fresh mozzarella with raw goat's milk and raw cow's milk and seeing what happened. One of the steps in making mozzarella is you stretch out the curd, so you coagulate these milk proteins, you create these milk curds and then you stretch them out. With the cow's milk, the stretching was magnificent. We could stretch the curds out to more than a foot long. With the goat's milk mozzarella cheese, we could stretch that a little bit, but then it crumbled and fell apart.

This had a lot to do with the amount of casein, which is the most important milk protein present in each of these milks. They have a different amount; goat's milk contains less casein than cow's milk. It's not a huge difference -- it's a difference of 2.1 percent by weight to 2.6 percent by weight -- but it is significant when it comes to the effects. When you have less casein, there's less protein to coagulate and create a network that makes this cheese. Cow's milk is stronger. Goat's milk is softer. That's why goat's cheese is really soft and full moisture, because of less casein.

SS: How should we be handling goat cheese when we are cooking?

MB: Goat cheese is not a great melter -- it barely melts at all. We would not put it on pizza like we do with traditional mozzarella, which is a great melter. But goat's cheese doesn't melt because of how it's made in that it's an acid-coagulated cheese. When acid is added to create cheese, it causes the casein proteins to bind super tightly. It's very hard to break these bonds. When you add heat to it, in other cheeses, in younger cheeses with loosely bonded proteins, they quickly flow apart and melt into this smooth, beautiful pizza topping that you want. Goat cheese doesn't do that because these proteins are so tightly bound. It crumbles.

When we cook with goat cheese, we only lightly heat it. One of my favorite recipes that we do at America's Test Kitchen is an herbed baked goat cheese round in which you coat a round of goat cheese in a crust with a little bit of egg and Melba toast. You freeze it so it becomes super cold. You bake it lightly so it gets warmed through and it has that creamy delicious feel, but it's not a melted cheese.

SS: That's a great trick. Why freeze it?

MB: It slows down the heating. It makes it so that the cheese won't ooze out of its crust. It allows the crust to crisp up while still keeping the cheese at the perfect texture and temperature. 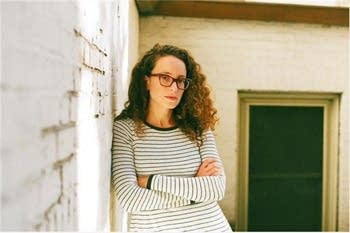