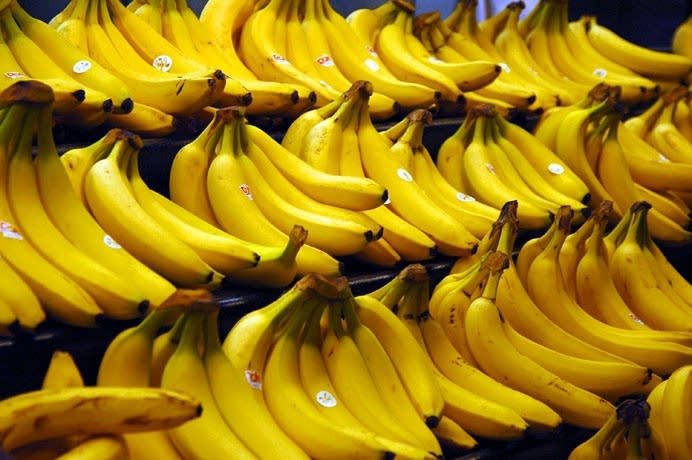 "Globally, 95 percent of our calories now come from 30 species," says journalist and educator Simran Sethi, author of Bread, Wine, Chocolate. "Three-fourths of the food we eat comes from 12 plants and five animal species."

Joe Yonan: You write that we are losing foods. What do you mean?

Simran Sethi: What I mean specifically is that we're losing biodiversity in foods. We're losing the diversity in every element that makes food and agriculture possible, from diversity in the soil and the diversity of and the existence of pollinators, to the seeds that we sow, the fruits and vegetables that we grow, and even the animals that we raise for livestock.

JY: When I go into the supermarket, it sure doesn't seem like we don't have diversity. Look at the yogurt aisle alone.

SS: You're not alone.

As a matter of fact, I decided to pay a visit to Walmart, which is the No. 1 grocery chain in the U.S. I counted 153 flavors of ice cream and eight different types of yogurt. Then I looked on to the sour cream, the butter and the cottage cheese.

It looks like we have a plethora of choice, but it's primarily in flavor and secondarily in brand. I'm just using ice cream and dairy products as an example, but 90 percent of them came from one breed of cow, the Holstein-Friesian.

JY: What difference does it ultimately make? What are the stakes?

SS: The stakes are really quite high -- it's not just relegated to ice cream and milk. This is what we see echoing through the apples that we find in the grocery store. We have the capacity to grow over 7,500 apples all over the world, but less than 100 of them are grown commercially in the U.S. About five of them -- including one that I have no idea why it's there, the Red Delicious, which is not at all delicious -- end up on store shelves.

Every historic fruit and vegetable variety that was once found in the U.S. has now disappeared. This matters because we need diversity for resilience. There's no investment adviser who would ever say, "Take all of your savings and put them in one stock and cross your fingers and hope for the best." Yet globally, 95 percent of our calories now come from 30 species. Three-fourths of the food we eat comes from 12 plants and five animal species.

We're creating this treacherous food system deliberately because it seems to make more sense in terms of efficiency, in terms of scale. But it doesn't make sense for the actual product that is being created and one that we need in order to survive -- and that's food.

JY: There have been some disastrous consequences of the loss of diversity through our history.

SS: There indeed have. The Irish potato famine was the result of a disease that wiped out most of the potatoes that were grown. One-third of the population depended on potatoes for food. One-eighth of the population, about 1 million people, ended up dying.

It's not simply a consequence of the loss of biodiversity, but everything that is around it. We see this happening right now with the loss of the Cavendish banana. It's a banana that replaced the banana that used to be in its place in the 1960s, known as the Gros Michel. It is succumbing to a different strain of the exact same soil fungus that compromised the earlier banana.

We can grow thousands of bananas -- and we do globally. But now we've reduced this to just one banana that stands strong on store shelves and ships well. We realize that we're creating a really treacherous situation. It's one that not only compromises the availability of the banana, but the availability of every single fruit and vegetable that we hold dear.

JY: I was so fascinated by the story that you wrote about the pistachio -- it wasn't about industrialization really at all, as much as politics.

SS: Exactly. The center of the world's pistachio industry used to be Iran. Back in 1929, a botanist traveled to Persia, an area that's now Iran, to collect pistachios in hopes of finding a variety that would be suitable for growing in America.

Out of 20 pounds of nuts that he gathered, there was only one variety that flourished. That nut has become the foundation of the pistachio industry here in the U.S. The reason that American pistachios took over wasn't because of the loss of diversity in the Middle East, but it was because of a trade embargo that former President Jimmy Carter imposed back in the 1980s as a result of the hostage crisis. We see here that the ban that devastated the Iranian pistachio market ended up empowering the American one to build its capacity.

There are a host of reasons that we lose diversity in certain areas. Researchers recently learned, led by a gentleman named Colin Khoury, that the whole world has moved toward what we call the global standard diet. We see pockets of biodiversity, but globally what we're seeing is a trend toward standardization -- a trend toward wheat, rice, corn, soybeans and palm oil. This is what the world is eating now.

This is a challenge because we see that in place of the crops that have been grown that were diverse, there are these standardized high-yielding hybrids. If we lose the diversity, we lose the resilience that we have in order to reach back in and find solutions when a crop succumbs to disease, pests or with climate change where we don't know exactly what will happen in the future. We need these backup systems.

But conservationists haven't really considered us, the eaters, as part of the equation. We also have the power to transform this system. Anything outside of those five foods -- the wheat, the rice, the corn, the soybeans and the palm oil -- becomes a revolutionary act. This is really about pivoting in the grocery store toward the olive oil or turning toward the heirloom tomatoes, craft beer, the craft chocolate or the specialty coffee. All of these opportunities are in our hands. They really are ones that will transform how food is grown and what is available.