Chef Pierre Thiam: 'Teranga is the word that symbolizes Senegal the best' 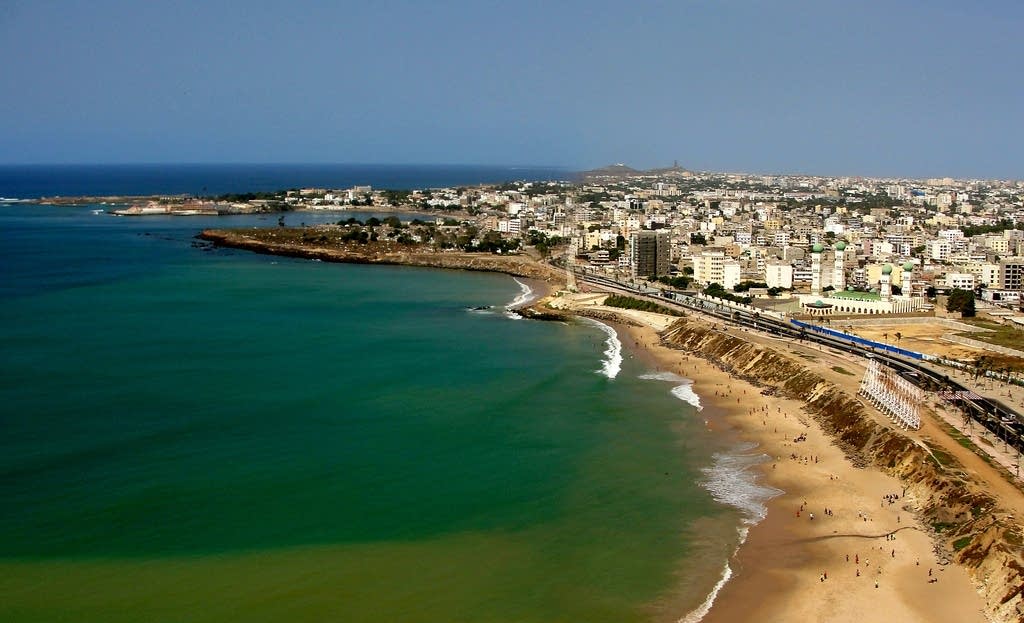 "If there's a set of values in Senegal, teranga would be the most important one," says chef Pierre Thiam. "It's the way you treat the guest." He is the author of Senegal: Modern Senegalese Recipes from the Source to the Bowl.

Senegal's cuisine: 'You have to expect lots of seafood'

Lynne Rossetto Kasper: If we've never seen Senegal, set the scene for us. What are the flavors, the ingredients, the aromas?

Pierre Thiam: You have to expect lots of seafood. Senegal, as you said, is the most western country in Africa. It's on the coast; the Atlantic Ocean is surrounding us. The city where I grew up is a peninsula, so it has lots of seafood.

The healthy aspect, which many people don't realize, is also very, very, very much part of our cuisine. Freshness, fresh vegetables, lots of leafy greens are also part of our cuisine. Rice is the most common grain, but you also have other grains like fonio, millet and sorghum (that comes more in the countryside when you go down south).

The climate also influences the cuisine. Senegal is south of the Sahara desert, so you have a semi-desert country in the north. The further you go south, you have more of a tropical, lush area. Both cuisines are different. The South has more okra and coconut comes out in the menu.

LRK: When you go home to Senegal, what is the first thing you want to eat?

PT: Thiebou jenn. Anyone who's been to Senegal has tried thiebou jenn. That's the national dish. That's the dish you would expect to see pretty much on a daily basis for lunch.

It's a very complex dish. The translation of the name doesn't really do it justice. It's a word in Wolof that translates to fish and rice. But thiebou jenn is so much more than that.

It's our paella in a way; it's rice that's cooked in a tomato broth. The broth has been enriched with fish. The fish is cooked in that broth with the tomato and vegetables. I mentioned the funky agent -- as well as fermented conch, you have dried fish. All that is in the broth with the vegetables. The vegetables could be as diverse as eggplant, yuca, sweet potatoes and okra. It's a very rich broth.

Once all those are cooked, they're scooped out and put on the side. Then the rice is cooked inside the broth. That color is red because of the rich tomato broth. The rice comes out red. The most important thing in the thiebou jenn for me is the crust at the bottom of the pot. Once you finish cooking the thiebou jenn, the rice has a crust. That brings another texture when you eat the rice and you have that crunchiness of the crust.

I forgot to mention that the fish is stuffed with a mixture that we call rof. That mixture is made out of parsley, Scotch bonnet, scallions and garlic. It's all pounded together and stuffed in the fish. You slit the flesh of the fish and you stuff in that mixture. It has surprising bites of heat that come once in a while as you eat it. It just blends wonderfully.

Is there another end of the spectrum in Senegalese food of very simple, very direct flavors?

PT: Yes. That reminds me of one dish from the South. It's very simple. We call it yassa.

The yassa has only really three ingredients: It's lots of onions that have been cooked slowly with lime juice and grilled fish or chicken. The chicken or the fish has been marinated in that same lime flavor -- lime, garlic and thyme -- for some time or overnight.

Then you grill it on the wood-burning stove. You have the char and the smell of the wood that just imparts in the meat or the fish. You serve it over rice. The onions have cooked so slowly. It has the lime, but it's cooking so slowly that it starts to caramelize. It has a sweetness. You have lots of onion that makes the sauce of this dish over the chicken and simple rice. It's a fruity flavor from the lime, the sweetness of the onion and the char from the wood-burning grill. It's comfort food, simple.

PT: Fonio is an ancient grain. It's a grain that's been cultivated for thousands of years in Africa. It is suspected to be the oldest cultivated grain in Africa. It's surprising more people don't know about it yet. But back in the days before colonial times, fonio was widespread. As a matter of fact, it's been found by archaeologists in burial grounds in ancient Egypt. That tells you how important that grain was.

In Mali, the country that borders Senegal, the Bambara people have a mythology. Their mythology is fonio is the seed of the universe. The whole universe evolved from fonio. These little stories tell you how important fonio has been in our culture.

It's this tiny, little grain that looks like sand. It's gluten-free and rich in protein. For me, the most important part is it's delicious.

It's very versatile. I make so many different recipes out of fonio. I use it to substitute for any grain. Or I make a salad out of it with lots of citrus and herbs like parsley. I use nuts in it. I use sometimes fruits like mangos, and cucumber and tomatoes. I make flour -- I make some bread with it. You can have some great gluten-free pastries with it as well.

It's a grain that's drought-resistant. That's another important aspect of fonio. It grows in the harshest conditions. Senegal is a semi-desert, so fonio could be growing in the sandy ground. It matures in two months. In two months you can have a harvest of fonio.

LRK: I notice from the recipes that it cooks in 15 or 20 minutes.

PT: Yes. There's actually a Bambara saying: "Fonio never embarrasses the cook." That's to tell you how it's so easy to cook. One cup of fonio, 1 cup of water and you have your recipe down. That's all you need, the same amount of fonio and water.

LRK: In a conversation that we had when we were talking about your first book several years ago, you mentioned something that was very interesting to me. You said Africa, in its native plants and foods that were traditional before foreigners came, could feed itself so well. But that people have turned away from it. Fonio sounds like one of the keys to that.

PT: Absolutely. Fonio is one of the keys to that. That's why I'm championing it, I'm pushing it and I'm getting a positive echo from everyone who tries it. Africa was feeding itself before colonial times. The continent has the most arable land -- it's one of the most fertile to begin with.

The tragedy of colonialism is that we were led to believe that everything that comes from the West was better. We were brainwashed so that we looked down at what we had.

Senegal is a very good example. To have fonio in Senegal, you have to go to the countryside. You would have difficulty finding restaurants in Dakar, in the city, that sell fonio because it's not Western enough. We prefer to have our baguettes made out of wheat. Every street corner of Dakar, of Senegal for that matter, sells the best baguette. They sell great baguettes, just like in Paris, because this is what we were looking up to. But our own products, such as fonio or even broken rice, the rice that we use to make the thiebou jenn ….

Broken rice: 'The grain that was promoted by the colonials'

PT: You know how we started using broken rice? That broken rice was imported to Senegal from Indochina (which became Vietnam); Indochina was part of the French colonial empire. The French brought this broken rice, which really was the over-processed rice that the Vietnamese would just throw away after they processed the rice. The French would send it to Senegal because they wanted our farmers to be busy growing peanuts. At the time, the cash crop for the French industries was peanut oil. The broken rice became the grain that was promoted by the colonials. The Senegalese embraced it like we embrace many things.

We make great things with that broken rice -- we make this great dish with it. But we look down at our own type of rice. We do have a type of rice in the south of Senegal, which is where my family is originally from, in Casamance. There's a rice called Oryza glaberrima. That's a different kind of rice than the one that comes from Southeast Asia.

LRK: In the 1700s and 1800s, from what I understand, that was the single most expensive rice in the U.S. Foreign countries paid huge amounts of money to get their hands on it. The irony of that is amazing.

PT: Indeed. It's really amazing that this great rice, which foreign countries paid tons of money for, in Senegal we still are not consuming it. It's just in the South; its production is just limited in the South. It's called the Jola rice. The Jola are consuming it because it has an important value spiritually -- they use it for their sacred rituals. They keep using it, they keep consuming it.

But the North, 50 years after independence, we're still importing rice from Southeast Asia. There are some changes -- the government is trying to promote local rice -- but there is still so much work to be done. It's political of course, but it's a mentality. People have to start really realizing how we have such great products and we have to really consume them.

'Teranga is what Senegal is'

LRK: The subtitle of the book is "from the source to the bowl," not the plate. What is the significance of the bowl in Senegal?

PT: The bowl is the vessel from which we eat. We eat around the bowl in Senegal, or in most of Africa for that matter. The bowl symbolizes unity. We eat together. Eating is something that's not done in a separate way in Senegal. You always stop everything when it's mealtime and everyone gets together. The bowl is that magnet that unifies the family, that brings friends and family together.

LRK: There's a word that you use a lot in the book, teranga.

Teranga is the word that symbolizes Senegal the best, I think. Teranga is a Wolof word that would translate to hospitality, but it's not the right way to translate teranga.

That's what I would say to summarize what teranga means. There's not one word that describes it, but teranga is what Senegal is. It's something that's really unique to my country. I'm not saying that because I'm Senegalese. It's just this value has been instilled in us that we have to treat the other as the most important person in the world.

LRK: What a difference that would make to the world.