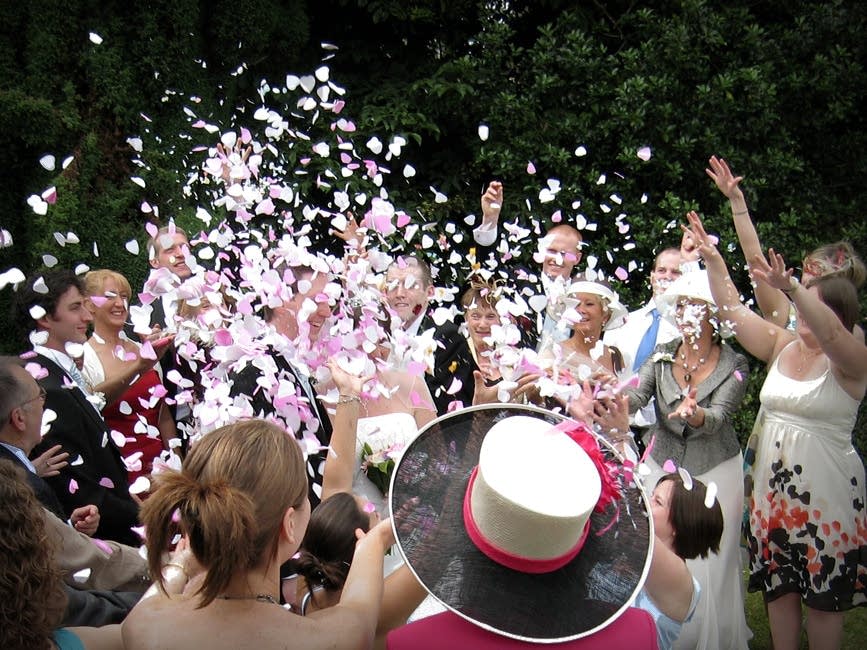 Confetti refers to both sugarcoated almonds presented to wedding guests in dainty tulle bags and the tiny bits of colored paper tossed into the air as the happy couple departs. Both trace their name back to the Latin conficere, meaning to “confect, compose, make.” In England, as far back as the fourteenth century, the word “comfit” was used to describe nuts and seeds that were coated in sugar. See comfit. In French, the word is comfit or confit. Italians use confetto for the singular, confetti for the plural. Confection, confectionery, confectioner, comfit, and confetti—all are related.

The first sugarcoated nuts and seeds were made by apothecaries and used medicinally. They were the original sugarcoated pills. Depending on the seed, nut, or fruit in their center, comfits were believed to have various benefits. Some were eaten after a rich banquet to aid digestion. Those made with caraway or fennel seeds sweetened breath, hence Shakespeare’s “kissing-comfits.” Such comfits are still found in India, where they are known as sweet saunf or valiary.

At weddings, confetti were tossed over the heads of the bride and groom to ensure fertility. The tradition may have had its origins in ancient Rome, where wheat cakes were crumbled over the bride’s head. Confetti were tossed at weddings in England, France, and other countries but were especially popular in Italy. In fact, the phrase mangiare i confetti is an idiom meaning “to attend a wedding,” although the literal translation is simply “to eat confetti.”

Since they were expensive, comfits or confetti were status symbols and were served at christenings, birthdays, banquets, and other celebrations in addition to weddings. Desirable gifts, they were often presented in elegant silver or porcelain boxes, or in edible marzipan containers.

The skill and equipment needed to make confetti meant that most often professionals like apothecaries and, later, confectioners made them. But some household cooks produced them as well, judging by the recipe in Hannah Woolley’s 1670 edition of The Queen-Like Closet. The equipment has changed dramatically over time and machines have replaced the hanging basin of the seventeenth century, but the basic process remains the same. The seeds or nuts are dried over heat, then sugar syrup is poured over them as they are swirled around to keep the syrup coating even and to keep the nuts separate. After each layer of syrup is applied and dried, another is added. The process is repeated until the desired coating is achieved.

Woolley’s description made the difficulty clear:

Move the Seeds in the hanging Bason so fast as you can or may, and with one Hand, cast on half a Ladle full at a time of the hot Sugar, and rub the Seeds with your other hand a pretty while, for that will make them take the Sugar the better; And dry them well after every Coat.

Later improvements obviated the need to put one’s hands in the hot sugar syrup. But even in the nineteenth century when sugar was more affordable, the labor-intensive preparation meant that confetti remained expensive. Thus, some confectioners began to cut corners. To lessen expense and save time, they covered the almonds or seeds with flour before coating them with sugar syrup. That allowed them to build up the layers faster and use less sugar. It was a cheaper, quicker way to make edible confetti.

Another solution was to make ersatz comfits that were not intended to be eaten at all. They were created to be tossed. Made of plaster in the shape and size of the candied almonds, they were sold by the basketful and hurled at friends, lovers, and even strangers at celebrations. Tossing confetti was a way to flirt, to attract the attention of a prospective belle or beau.

When Johann Wolfgang von Goethe visited Rome in the late eighteenth century, he called the pre-Lenten carnival “a kind of small war, mostly playful.” He described black coats spotted with white under a barrage of plaster confetti.  By the time Charles Dickens visited in 1844–1845, the small war had escalated. Dickens said confetti turned carnival goers as “white as millers.” To protect their clothes, they donned dusters; to shield their eyes, they wore wire masks.

At the end of the nineteenth century, a new type of confetti made its debut. In 1894 an advertising poster by Henri de Toulouse-Lautrec depicted a happy, smiling young woman being showered with colorful— and harmless—confetti made from paper. The poster was commissioned by J & E Bella, a London stationery company. Initial newspaper reports were nearly delirious about the new product. On 26 March 1894 The New York Times described a new carpet on the boulevards of Paris. “The confetti made a velvet soft to the feet, picturesque to the eye, and novel even to the most advanced taste,” the newspaper reported.