Is the ability to cook what made us human?

by Lynne Rossetto Kasper
Listen: Is the ability to cook what made us human?
08:33 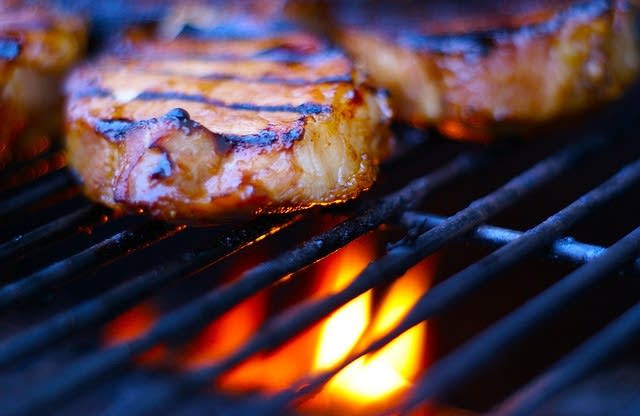 Slow cooker recipes for easy big batch cooking and meal prep
Things To Do With Rice
Gold in the kitchen: amp up your cooking with caramelized onions
Photo: ctaloi / Flickr

Richard Wrangham, the Ruth B. Moore Professor of Biological Anthropology at Harvard University and author of Catching Fire, studies the role of cooking in human evolution. "Once you start thinking about the importance of cooking -- its supply of energy, its strange distribution compared to natural foods -- it's bound to have affected our evolution hugely, our behavior, our society, our cognition, all sorts of features about us," he says.

Lynne Rossetto Kasper: For years and years, we've been told that tools are what separated us from the other animals. But you've gone against all this research. Why?

Richard Wrangham: For many years, it was both tools and meat-eating that people thought of as being the critical factors that elevated humans -- from being apes into being humans. What has struck me is that no one has paid attention to this amazingly important system of food processing: cooking. The reason it seems so fantastically important is that we all know that you are what you eat. We all know that for animals, the search for food is absolutely critical.

RW: The science behind the importance of cooking comes from a review of a tremendously diverse nutritional literature. What it says is that there are two big ways in which cooking gives us increased energy.

One is that it increases the proportion of the nutrients in our food that we are able to digest. If we eat raw wheat, much of the starch that comes into our bodies is simply not available to us to be digested, and we pass it out uselessly.

The other thing cooking does is reduce the amount of metabolic energy that our bodies expend in digesting the food. If we cook our food, then we save maybe 10, 20 or 30 percent -- we don't really know the exact percentage -- of the amount of energy that we would ordinarily use to digest the food.

These two things mean that when we cook our food, we just get more energy, more calories, and then we can use it to change our biology.

LRK: By looking at the remains of early man, could you tell whether the creatures at that time were cooking?

RW: I think we can. We can't do it from the direct evidence, because there isn't any direct evidence. The record of the control of fire just decays slowly as we go back further in time to the point where you don't know whether its absence means nobody was doing it, or that the evidence has disappeared. But we have wonderful other ways of getting at this question.

One of the discoveries that I made is that humans are incapable, biologically, of living effectively off raw food. That's because of those advantages I mentioned of what cooking does to give us energy. We've adapted to be able to use cooked food and not to use raw food.

What is it in our bodies that forces this adaptation? There are two obvious things that we can see in fossil species. One is small mouths and small teeth are associated with cooking, and the other is small guts. If we look at our stomach, our small intestine and our large intestine, they're about 60 percent of the size that they would be if we were a great ape. We can go back in time and say, "When did our ancestors acquire these two features of small guts and small teeth and small mouths?"

LRK: The importance of small mouths is that we didn't need to chew as much?

If we were a great ape, we would spend 6 hours a day chewing our food. Of course, it wouldn't be apples, oranges and bananas that have been domesticated by humans and made full of sugar and to be low in all of that fibrous stuff. You'd spend all day chewing. You'd need a big mouth and big teeth to do that.

But once you cook, now you're eating high-density, high-quality food, and you can become this rather strange, small-mouthed species of ape that we are. It's clear when that happened. That happened just this side of 2 million years ago, about 1.9, 1.8 million years ago.

LRK: Am I making a leap here saying that sharing food or cooking leads to socialization, leads to man being more engaged with fellow man?

RW: You are absolutely right in thinking that many people have followed that line of argument. We nowadays tend to think of a cooked meal as something very sociable. If you're a hunter and gatherer, you're going through the bush and you eat some raw snacks. That's just on your own. But you bring food back to camp, you cook it up and you sit around it. This is a time for telling stories and for the family to come together. That carries on into modern life. But the question is why. What is responsible for that? No one has ever really been quite sure.

"The temptation to fight over the food has led to some very clear social rules."
-Richard Wrangham

In my book, I develop this idea: The reason we are so social in our cooking is not just that the food is attractive and people want to share it for that reason, but the temptation to fight over the food has led to some very clear social rules. Those social rules lie at the heart of human society; the rules over the question of how to control conflict and competition and the temptation to pinch food from each other around the fire.

Incidentally, this has been particularly fascinating in terms of gender relationships, because men could obviously steal from women because of their bigger size. Very occasionally it happens, but it's very, very occasional indeed. Really, what's happening here is that in all societies except modern urban societies, women invariably cook for men. That seems to be part of an ancient sort of protection racket, in which, as a result of women cooking for men, they get men to protect their food from possible theft by other men.

RW: It seems very fundamental to the way we are. Once you start thinking about the importance of cooking -- its supply of energy, its strange distribution compared to natural foods -- it's bound to have affected our evolution hugely, our behavior, our society, our cognition, all sorts of features about us.