Traveling and teaching fermentation workshops from a converted school bus 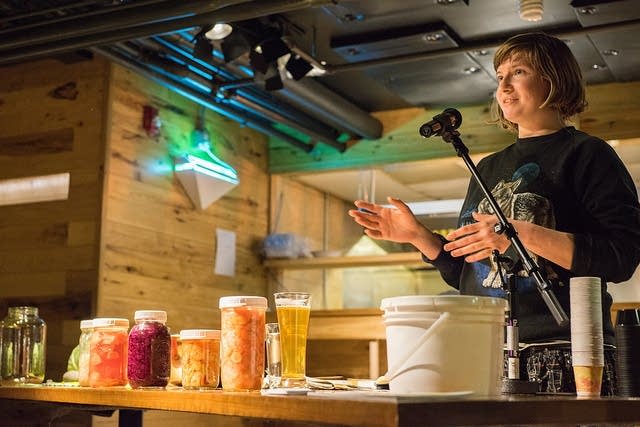 In 2013, Tara Whitsitt converted a school bus into the fermentation lab and workspace Fermentation on Wheels. Since then, she has traveled more than 12,000 miles across the country, teaching fermentation workshops from that bus.

David Leite: You call it Fermentation on Wheels, and I call it your Fermentation Nation tour. Can you explain what that is?

Tara Whitsitt: Fermentation on Wheels is a mobile grassroots educational project with a strong focus on accessibility, creativity and building community. I'm based in Eugene, Oregon. I left in October 2013, and I've been traveling the country since. I live and work out of my bus. Basically, it's a way for me to reach a large number of people of all ages and socioeconomic levels, and to teach the art of fermentation as well as the importance of sustainable foods.

DL: Where did you come up with the idea of a school bus?

TW: It came to me in a dream -- a literal dream. I had it three nights in a row. I was very intrigued and also a little terrified by it. But I also wanted to explore that more. So what came about was simply a mission about farming, food and sustainability.

The bus especially speaks to self-sufficiency and living more sustainably. I have an off-grid system; it's solar-based. I have to conserve water. There are all of these little aspects that make the bus a great challenge. In addition to teaching fermentation, I also try to inspire people to live more sustainably.

DL: And self-sufficiently. You're like the Jack Kerouac of the fermentation world. Take it to the road.

When you roll into town somewhere, what is the reaction when people see a school bus on the side of the road or maybe on a farm lane and there you are fermenting something?

TW: There are mixed reactions. Some people would prefer a bus not be parked on their street. I'm very kind; I leave notes and my number on the bus, and I have a sign saying exactly what my project is.

As far as people at workshops who enter the bus, they're shocked usually. I think most people assume it's not going to be as intense of an environment as it is. Because I've done so much, I have a fermentation library and a fermentation lab. I'm fermenting anywhere from 40 to 50 gallons of foods and beverages at a time on the bus. I have a sweet little workshop space for people to come in, sit down and converse.

DL: What are some of the foods that you are fermenting at any given time on the bus?

TW: Kimchi and sauerkraut always. I teach a lot of kimchi, sauerkraut and fermented vegetables, because that is a more common ferment and one of the most approachable. That's a constant.

I'm a wine and beer hobbyist, so I have quite a bit of that going on. I like to brew kombucha as well.

DL: Do you have an oven on the bus?

TW: I don't have an oven. I have a wood-burning stove and a Dutch oven, so I can jive with that. But I mostly do pancakes on the bus. Then I do a lot of baking when I'm staying with hosts on the road. That's my gift; I try to do as much cooking as I can to show my appreciation.

Totally blissed out in my bus, awesome shot by my friend @hashemsayshello. It's been a dreamy week and I'm prepping for my New England mini-tour. Many photos to come! I'll be visiting a load of awesome fermentation companies this week!

A photo posted by Fermentation on Wheels (@fermentationonwheels) on Feb 7, 2015 at 6:38pm PST

David Leite is the publisher of the website Leite's Culinaria, which has won two James Beard awards. He is the author Notes on a Banana: A Memoir of Food, Love, and Manic Depression, as well as The New Portuguese Table: Exciting Flavors from Europe's Western Coast, which won the 2010 IACP First Book/Julia Child Award. Leite also won a 2008 James Beard award for Newspaper Feature Writing Without Recipes, a 2006 Bert Green Award for Food Journalism, and Association of Food Journalists awards in 2006 and 2007.