How land animals became marine animals: 'They followed their stomachs' 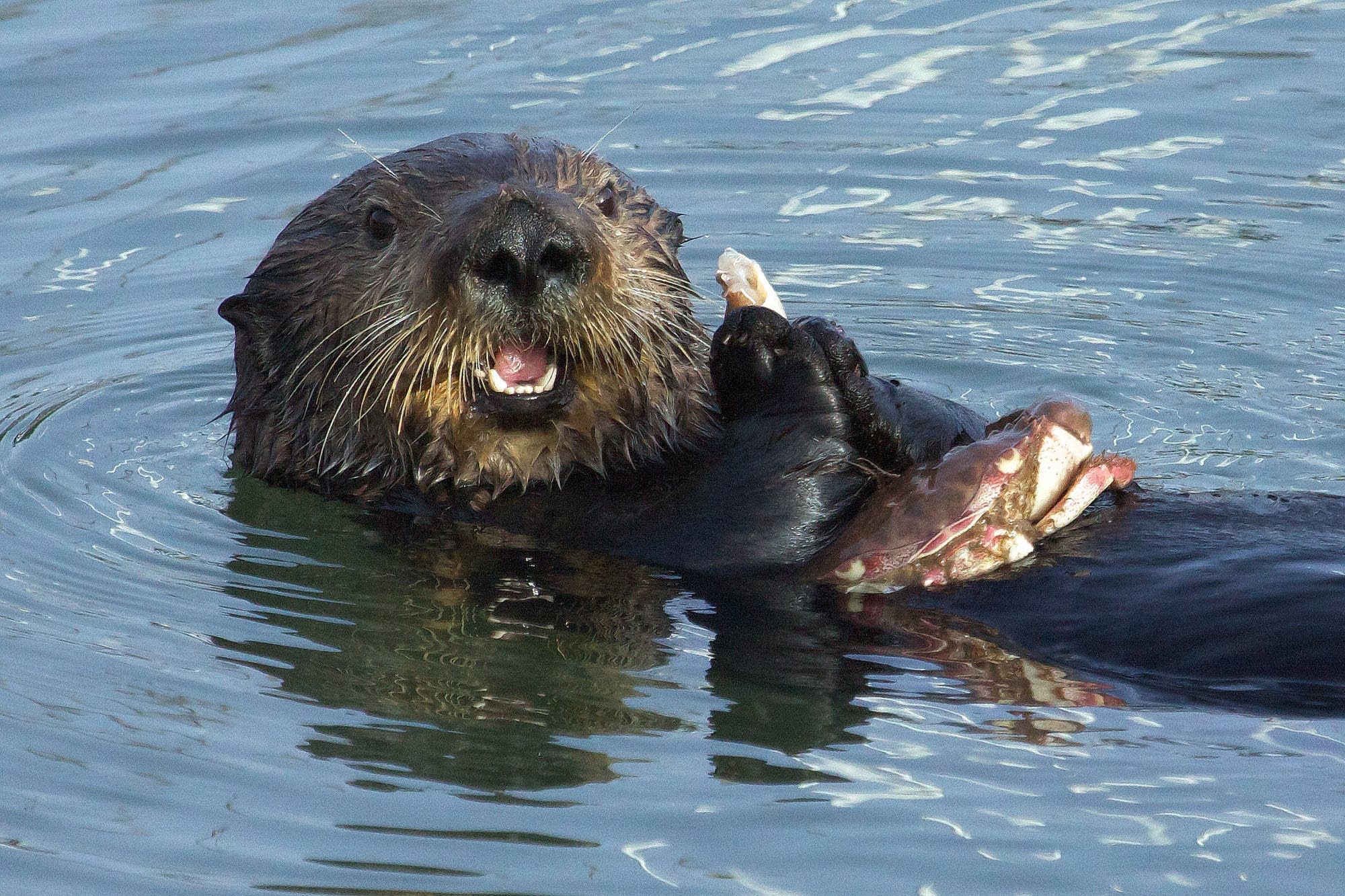 Two-hundred-fifty million years ago, approximately 90 percent of species in the ocean went extinct. Land-dwelling animals adapted to available resources, spending more time feeding on the coast -- and then eventually living in the water. "They followed their stomachs into the ocean," says Neil Kelley, a Peter Buck postdoctoral research fellow at the Smithsonian’s National Museum of Natural History.

Neil Kelley: What we were interested in was looking at how the skull and teeth of animals that live in the water reflect their diet, what they eat.

LRK: What brought you to this study?

NK: I'm particularly interested in extinct animals. I'm interested in fossils that lived in the ocean around the time of the dinosaurs, and especially marine reptiles. These were animals that lived on land, and then evolved to move into the ocean. As they did so, they had to change their diet to start feeding on food that they could find there instead of on land.

We have similar things in the oceans today: Marine mammals like whales and seals that originally evolved on land but moved into the ocean and changed their diet so they could feed and live there.

What I was interested in was if these repeated cycles of animals moving from land to the ocean -- then some of them adopting similar lifestyles and similar diets -- led to similarities in the skulls and the teeth. If we can figure out that relationship in living things and figure out how closely the shape of their skulls matches their diet, then we can start to understand more about what the fossils and extinct things ate as well.

LRK: Does this give you any insight into how sustainable sea life is going to be in the future? I'm thinking about what's happening in terms of the oceans, contamination and climate change.

NK: Absolutely. One of the reasons that we're interested in these animals is that we know they play a really important role in ocean ecosystems today.

For example, when sea otters were over-hunted off the coast of California, that had a major negative impact on the ecosystem. The sea otters were keeping sea urchins in check, in control, by eating them. When the sea otters disappeared, the urchins became very abundant. They started to overgraze all of the kelp forests there.

We're interested in these relationships which are usually mediated by what things eat, the interactions that are occurring between predators and prey and different food resources. Being able to develop a better understanding of how these marine animals evolved and what they eat will tell us something about how ocean ecosystems work.

LRK: Is this going to have any effect on how the evolution of life on the planet is studied?

NK: My results? I hope so. I think it's part of a bigger trend in the field of paleontology and biology to try to come up with these integrated approaches. To try to take different types of datasets and combine them to develop a more complete understanding of how life has evolved through time.

LRK: This is going backward a bit, but what did drive those animals into the ocean?

NK: It's an interesting story. That first transition of land animals going into the ocean coincides with the largest mass extinction event of all time, larger even than the one that killed off the dinosaurs.

"We are worried about a mass extinction in the oceans. But we just don't even know that much about what's out there yet."
-Neil Kelley

LRK: When was that?

NK: Two-hundred-fifty million years ago. It's called the Permo-Triassic mass extinction. Upwards of 90 percent of all species in the ocean went extinct -- total devastation. It's hard to imagine how big of an event this was.

That basically hit a reset button on ecosystems in the ocean. It opened up new opportunities. We think that allowed some of these land animals to start to move in. In a narrower sense, they were probably really adapting to resources that were around them. They followed their stomachs into the ocean.

They were finding food on the coast. During this mass extinction event, it's likely that food on land was actually maybe a bit harder to come by. There's evidence for acid rain and global warming, things that were probably damaging ecosystems on land and the ocean. But we think that maybe coastlines provided a little bit of a refuge. These animals were living in coastal environments, eating seafood that washed up on the beach, and over time became more and more dedicated to living in the ocean.

LRK: I can't resist this question. It's science fiction, but maybe it isn't. Isn't that scary? Could this be a preview of what may be coming?

NK: It is scary. There are many people who are suggesting that we may be living in the next mass extinction event. We might be watching it start and unfold before our eyes. Certainly if we look at the rate of extinction that's happening in the ocean today, it seems to be very high relative to average levels in the past. It is closer to these big events that are very rare that only happen every 100 million years or so.

Yes, we are worried about a mass extinction in the oceans. But we just don't even know that much about what's out there yet. It's hard to really understand what the aftermath or the process of extinction is going to look like when we don't know what our baseline in the oceans is to start with.

LRK: That's pretty amazing when you think it's two-thirds of the planet.