by Melissa Clark
Listen: It may take 10 tries to familiarize picky eaters with new foods
06:25 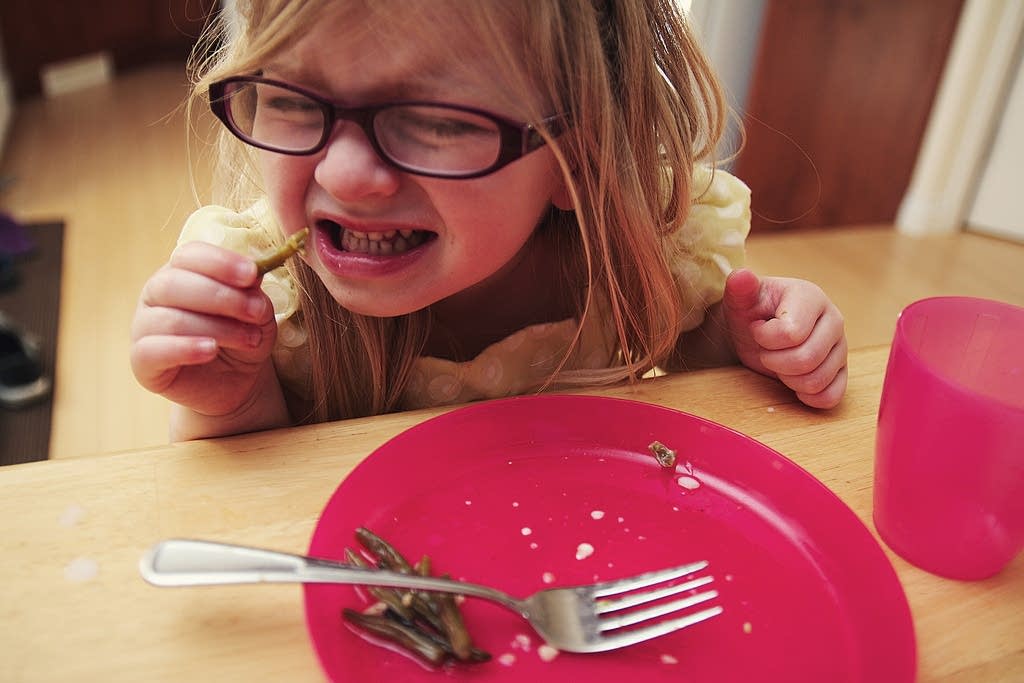 Have you ever danced in front of a high chair, turned a spoon into an airplane or simply bribed a child with cold, hard cash to get down another forkful of food? Then you will want to hear how Katie Workman, mother of two and author of The Mom 100 Cookbook: 100 Recipes Every Mom Needs in Her Back Pocket, takes on picky eaters.

Melissa Clark: Kids are so inconsistent about what they eat. One minute they love capers, the next they don't like anything except for mashed potatoes. I know you have great coping strategies. How do I deal with this?

Katie Workman: I wish I could list off a wonderful array of reliable solutions, but I can't. I do have a lot of experience with this with my own kids. They are pretty good eaters on the whole, which by the way, I think is something people should brag about less.

MC: I know. Don't you hate when you hear about other people's kids who eat all kinds of sushi, anchovies and every single vegetable in the world?

MC: So how do we cope with these little picky eaters? What can we do?

KW: You basically have to keep moving forward like a shark. There is no choice.

There are so many ebbs and flows. Every time you think you have something conquered -- your kid eats fish and you think, "Well that's done, my kid like fish now" -- then sure enough a week later they are scrunching their nose up at the very same dish.

The No. 1 thing, and it's the No. 1 hardest thing not coincidentally, is to try not to push too hard. To try not to let it show how much you want them to eat that fish or those Brussels sprouts or whatever it is. With kids there are control issues. This is a time of experimentation. They are trying to push and pull with you. As hard as you push is as hard as they will pull and vice versa.

It's not just a control issue though. There's an actual genetic feature at play, which I found really interesting when I started to dig into this. One does think, "Why are some kids pickier than others?"

There's a very interesting fact which is that we are all born with about 10,000 taste buds. Over the course of time, by the time you reach full adulthood, you only have 3,000 taste buds. The number simply diminishes. So whatever we perceive as pleasantly bitter, kids perceive as extremely bitter because they have all their little receptors firing away.

MC: So that's why they like bland food. Because if something is a little blander, it's more gentle in their mouth.

MC: Do we outgrow this? Because bitter things can be really good for you. Some of the healthiest foods are bitter.

MC: Is that how we can get our kids to acquire all those acquired tastes?

KW: Exactly. It's called an acquired taste for a reason.

MC: How do you do that? If your kid doesn't eat broccoli the first time or the second time or the third time, how many times do you have to reintroduce a food for them to possibly like it? Or at least to know that you've done your best? Maybe they won't ever eat broccoli.

KW: We all have some foods we just don't like. That's fair, right? But the number 10 comes up a lot, in terms of how frequently you have to introduce something in order for it to become somewhat familiar. Ten times seems a little daunting, but it doesn't have to be 10 times over the course of 10 days; it just has to sort of appear.

Another thing is if you are steaming broccoli, that's just one way to serve it. But maybe you toss it with a little bit of olive oil and salt and roast it at a high heat to bring out and caramelize the natural sugars. In my house that's the way broccoli goes flying. But a steamed plate of broccoli? Not so much.

MC: Have you ever successfully gotten your kids who used to hate something to start liking it just by repeatedly reintroducing it?

KW: Yes, fish, by using a flavor my kids already liked. One of the things my sons both really like is the flavor of balsamic vinegar. One day, I poured a balsamic vinaigrette over some fish and marinated it for 20 minutes, broiled it, and suddenly fish was OK.

Another thing I love is peer pressure, which is usually brought up in a bad way. But if your kid is seated next to, say, an older kid or someone they perceive to be super cool, it can be effective. My kids were sitting with teenagers at a dinner party a couple years ago, and they were scooping up a butternut squash coconut Thai bisque. They were eating it like, "Oh yeah, we eat this all the time."

I would also stress manageable portions. A big slab of fish on somebody's plate is intimidating. Start with something small. If it's soup, serve just a little ramekin. Don't overwhelm them with the portion size.

Melissa Clark is a food writer, author, and host of our new podcast Weeknight Kitchen with Melissa Clark. She is a food columnist for The New York Times, and has written more than 30 cookbooks including Dinner in an Instant, Cook This Now, and In the Kitchen with a Good Appetite.
Lentil Soup with Bacon and Cilantro
Longevity Noodles with Ginger Chicken and Mushrooms
Basque Cheesecake
Miso-Roasted Cauliflower  with Chickpea, Carrot  and Noodle Salad