With world olive oil output down 20% in 2014, shop carefully 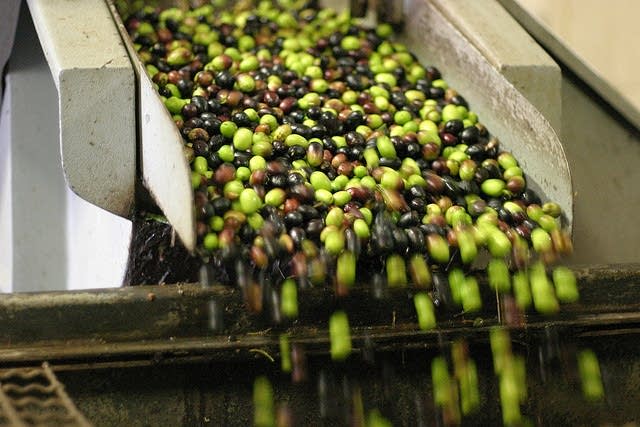 "The world output of olive oil is supposed to be down 20 percent this year," says Russ Parsons, food editor and columnist at the Los Angeles Times. As a result, consumers need to shop carefully for olive oil. He wrote "Europe suffers olive oil disaster: How you can survive it."

[Ed note: More from Parsons on the artichoke.]

Sally Swift: What's the word on the 2014 olive oil harvest?

Russ Parsons: The word is really, really bad. The world output of olive oil is supposed to be down 20 percent this year. When you're talking about a staple crop like that, that's just a massive, massive amount.

What's even worse is that the places that have the best olive oil seem to be among those that are the hardest hit. Tuscany and Umbria have just been absolutely devastated. The Italian newspaper La Repubblica is calling it "The Black Year of Italian Olive Oil."

SS: What's behind that?

RP: There are a couple of factors that are behind it. The first, of course, is that the weather was just awful, and it was awful at all of the most important times.

When the trees were going from flower to fruit, the temperature, which had been freezing, all of a sudden shot up, causing them to drop a lot of fruit. It was a really hot and humid summer with lots and lots of rain. Then in September, when what olives had been able to survive were just getting ready to ripen, they had massive, massive hail storms. They had two of them that lasted for more than an hour that just knocked everything else off the tree.

On top of that, when you've got really hot and humid weather, that's when you get lots of pest problems. Italy has been hit pretty hard by a fruit fly that especially loves olives. It lays its eggs in the olives. The olive looks almost normal until it's ripe and it's picked. You find out that the eggs have been eating on the olive. It just completely spoils the fruit.

There are important producers like Capezzana who simply are refusing to make any olive oil at all this year.

SS: What's going on in the rest of Europe? Is it as bad in Spain?

RP: Spain is down by half because of the same kind of weather problems. Spain is the world's largest olive oil producer. That's a little bit misleading because Spain was way, way up last year. They had this humongous, record harvest.

Greece is supposed to be doing OK, which is really good news.

There are places in Italy that are doing better than others. Supposedly in the southern part of Italy, Puglia and Sicily were not quite as hard hit. Also, olive groves that are at higher altitude in Tuscany and Umbria were not as hard hit.

There will be some of that good oil coming in, but not nearly as much as in the past. And of course, it's going to be really expensive. It's really important that people learn to shop for oil, and shop carefully.

How to shop for olive oil

SS: What should we be looking for when we're buying this harvest?

RP: The thing with olive oil is that it's a slippery business. I remember doing a story very similar to this in 1985. There had been a huge freeze which had devastated the olive groves in Tuscany. I had interviewed everybody I could find, and everyone assured me that there would be almost no production of Tuscan olive oil that year. I wrote that story with great confidence. Then when I looked at the statistics a year later, actually exports of Tuscan olive oil had increased.

"It's really important that people learn to shop for oil, and shop carefully."
-Russ Parsons

SS: How did that happen?

SS: You could be buying olives from somewhere else, pressing them in Tuscany and selling them as Tuscan oil.

RP: Exactly. Imports of olive oil in Italy are already up 45 percent. There's going to be a lot of that stuff going on.

There are a couple of things that you can do. One of them is read the label carefully. If it says "produced and bottled by," that's an indication that the oil in there came from that actual estate.

Also, the more careful olive oil producers, the ones who are going to be more reliable, will vintage date their oils now, so that you're sure that you're getting fresh oil.

Failing that, a lot of people are recommending that you just stock up on the 2013 oils that are already here. Make sure that you keep them in a cool, dark place.

SS: Yes, because we're at the end of their good-use date.

It sounds like Greek oil would be pretty safe.

RP: The Greek oils are supposed to be good. They're going to be coming in, so look for them.

California oil production has really, really improved over the last 5 years. They have very, very stringent controls. There is some debate about whether everything that is being produced meets those controls, but a place like California Olive Ranch, that's my house oil, they do just a terrific job at a remarkably fair price.

Related: What extra virgin means, and who in the olive oil industry abides