Chef Sean Brock: Finding lost ingredients is the only way to 'truly restore a cuisine'

by Noelle Carter
Listen: Chef Sean Brock: Finding lost ingredients is the only way to 'truly restore a cuisine'
06:58 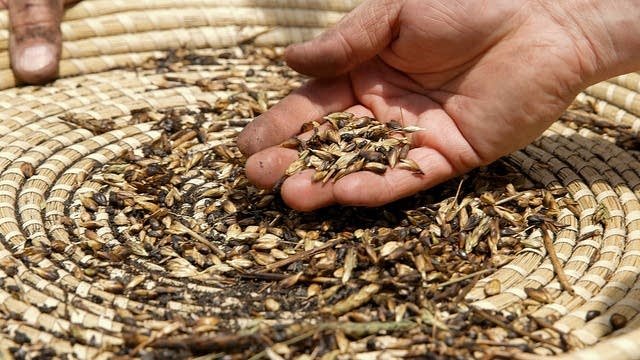 Chef Sean Brock grew up in a town in rural Virginia where seed saving was a way of life. "You just saved these seeds not because you were poor, but because you really loved the flavor of a particular tomato or a particular bean," he says.

Noelle Carter: You mention early in the book that your mission is to elevate Southern food. The first recipe you give is for Hoppin' John, but this isn't just any recipe.

Sean Brock: I had the lesson of my life over a bowl of Hoppin' John, and I didn't even know it was happening. It was in the late '90s and I was in Charleston, South Carolina, attending culinary school. I'd read so much about this dish. I was reading so much about Lowcountry cooking from these old 19th-century books, and I just kept seeing Hoppin' John everywhere.

NC: It is all about the ingredients. You make a big point in the book about preserving heritage ingredients, searching out lost foods and the lost ingredients that made them.

SB: I was reading a lot about the food of the South pre-Civil War, and I was fascinated with that. A lot of things changed after the Civil War in agriculture and therefore cooking, but a lot of the cuisine's foundation was built on that antebellum period. The products that were being grown were just extraordinary. The soil they were being grown in was amazing. But the exact varietals themselves had a very, very amazing flavor.

After the Civil War and then going into the Great Depression, a lot of that stuff just disappeared, and so the flavor disappeared. For us, it's very, very important to find those old varieties and bring back that flavor. That is, in our minds, the only way that you can truly restore a cuisine.

NC: You describe yourself as an obsessive seed collector. A number of the ingredients you use were perhaps on the verge of extinction. I know you've done a lot of work with Glenn Roberts of Anson Mills and others to preserve and promote heirloom crops.

SB: It was a way of living for my grandmother and for my family. You just saved these seeds not because you were poor, but because you really loved the flavor of a particular tomato or a particular bean. That just became a part of me my whole life.

After meeting Glenn and John [Coykendall] at Blackberry Farm, I really saw the importance of it. Because if we're not saving these things, they're going to disappear. When they disappear, the stories disappear, the flavor disappears. Once you realize that, you do everything you can to keep that from happening. The more you do it, the more beautiful food you find.

I'm a collector. I collect guitars; I collect all kinds of different things. It's another way for me to feed that obsession. I've been collecting seeds for as long as I can remember.

NC: One of the things I got from your book was as much as you talk about Southern food, your philosophy and your passion can be applied to almost any regional cuisine.

SB: I think each place has its own taste, and that's just a fascinating thing to think about. That's important for a chef, and that's important for someone at the restaurant. When people visit you, when they come to Nashville, Tennessee, or when they come to Charleston or wherever your restaurant is, that's another extension of that visit. That's the way a place tastes; that's what it feels like to eat; that's the emotion that comes along with visiting a place is that experience at the dinner table.

In order to do that, you've really got to focus on collecting the ingredients, the recipes and the stories of each region no matter what region that is. It's not really about geography, it's just about an attitude.

NC: Is there a recipe in the book that best encapsulates your philosophy?

SB: I've been thinking a lot about what my favorite thing in that book is, and it's a hidden recipe. It's not laid out like a traditional recipe; it's a story. It's the way old recipes used to be written and passed down. That's this recipe for my grandmother's mixed pickles.

You take a crock, a huge creek rock and a pillow, and some vegetables, salt and water. You blanch the vegetables, and then you put them into this crock in this saltwater solution. You put the rock in the pillowcase and you drop that on top to weigh it down. You let that ferment for as long as you want.

You rarely see those kinds of recipes. You rarely see that recipe. It's corn, beans, cabbage and peppers, and it's just amazing. It was always on the table when I was a kid.

I just love introducing those new things to people and then watching them get hooked. "I can't believe I've never had those mixed pickles, now I have them every day."

To me, that's one of the great things about being able to write a book is to share those things from your childhood. I was very, very lucky to have grown up in a family that loves food more than I've ever seen anybody love food. Just the passion that my mother and my grandmother had -- as a child, watching them marvel over a tomato. That's something that I find myself doing every day now. It's just amazing how hereditary that is.

NC: It's a beautiful thing.