Jacques Pepin: There is always a better way to make a hot dog

by Lynne Rossetto Kasper
Listen: Jacques Pepin: There is always a better way to make a hot dog
07:46 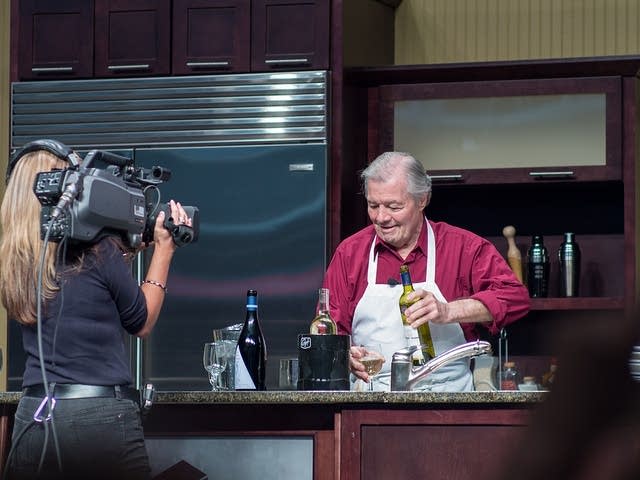 In the '60s and '70s, the American food revolution erupted. A young French chef was pretty close to the forefront, but I don't think he knew it at the time. His name was Jacques Pépin.

My first memory of Jacques was him demonstrating in a department store in Brooklyn. He'd pick up a knife and everybody would sigh. During his breaks he'd come upstairs and make omelets for the staff. He just charmed us -- we thought he was the hottest thing on two legs. His food was pretty swell too.

Jacques now has full master's status as a culinary groundbreaker, a TV star and a consummate teacher. His 26th book is Essential Pépin: More Than 700 All-Time Favorites from My Life in Food.

Jacques Pépin: Certainly the first time I went to the supermarket was in America. Supermarkets did not exist in France. I thought it was nifty to have one place where you could buy everything. Instead of going to the fishmonger, you could buy fish, vegetables and milk in one place -- everything was there.

I was however surprised at the amount of packaging. Also, there were not that many vegetables. They had great meat -- terrific beef, lamb and lobster. But one salad was just iceberg, that's it. No leek, no shallot, no oil and different vinegars -- all that stuff did not exist. It was different, but exciting at the same time.

I came here in September 1959. By the next year, Craig Claiborne of The New York Times came to the pavilion where I was working to do a piece. I became friends with Craig, and Craig introduced me to Helen McCully, the food editor at McCall's and later House Beautiful. She kind of became my surrogate mother. Helen spoke with James Beard on the telephone like 2 hours every day about the whole food world. Through Helen I met James Beard.

Then a few months later, in the spring of 1960, she said, "Can you look at that manuscript? I have a manuscript you have to review. I think it's pretty good."

I look and I say, "Shoot, this is pretty good."

She said, "Well the woman from California, she's going to come next week. Let's cook for her. She's a very big woman with a terrible voice." And of course that was Julia Child.

My point is that the trinity of cooking -- Julia Child, James Beard and Craig Claiborne -- I knew those people within 6-8 months after I arrived. That shows you how small the food world was.

LRK: Coming from France, you were used to a class system where a chef would not have had the kind of freedom that you had here in the U.S.

JP: Without any question. We are quite different.

I remember in France working in big restaurants like Plaza Athénée, Maxim's, Fouquet's in Paris. The cooking was pretty rigid, organized and disciplined. Certainly at the Plaza Athénée we cut the tomato one way. I never even questioned it, that was the way things were.

That's what happened for us, for me certainly, with nouvelle cuisine. All of a sudden I cut the tomato in the other direction. That was certainly nouvelle for me. People my age, we had known what it was before. For most people though, we do not have nouvelle cuisine. This is the way they learned, and that is the way it is period.

LRK: How do you think the American palate has changed?

JP: This is an impossible question. On one hand there is a dichotomy. Often for Europeans, they look at Americans who basically eat five dishes: hot dogs, hamburgers, fried chicken, pizza and I don't know, canned macaroni or whatever.

To a certain extent, there is truth in that. When you go to the mall, people who are there eat those dishes over and over and that is what they eat. In that context the spectrum of taste is going to be shorter than most Europeans'.

However, all over the country now, certainly in New York and San Francisco and big towns, the diversity of food is much larger than it could be in any European country because it's America. The way we eat in France, we eat 99.99 percent French, in Italy you eat 99.99 percent Italian, and in Germany as well or Switzerland. But in America, no. That's the whole point.

LRK: It's interesting too because done well, each one of those five dishes you talked about are also brilliant dishes.

I have taught at Boston University for 29 years, and at The French Culinary Institute in New York here. Young chefs, they get all excited, they want to do something very complicated. By this they want to do a big caramel cage, or something fancy, esoteric and different.

They say, "Are you kidding or what?"

Whatever it is, you can go always in depth and make it better -- you will remember that. You will remember a great hamburger, a great piece of chicken or anything else. You don't have to be complicated, you can as I say always work in depth.