Chef Vikas Khanna on viewing religion through the lens of food

by Lynne Rossetto Kasper
Listen: Chef Vikas Khanna on viewing religion through the lens of food
07:07 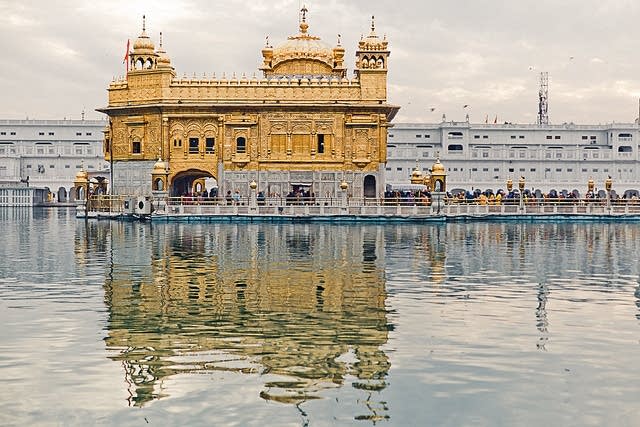 Chef Vikas Khanna created the Holy Kitchens film series, which focuses on seven different religions. "We don't talk about religion in the films, we just talk about food," he says. "We see the whole thing through the lens of food, which makes it very unique." As part of the series, Khanna spent a week with the Dalai Lama.

Lynne Rossetto Kasper: Where did you grow up and what was that like?

Vikas Khanna: I grew up in Amritsar, India, a city on the border of India and Pakistan. It's in northern India in Punjab. We call it the state of five rivers -- that's where it gets its name from. It's a small city, but it's also a holy city for the Sikhs because the most important shrine of the Sikhs, the Golden Temple, is there.

Every Sikh temple gives away free food. That is how it got instilled in my mind that food is something beyond feeding the human body. It's something that connects you spiritually to a higher self. That is where all my life it has been an education. It was very practical; if everybody shares, there's nobody hungry in the world.

But I love that everybody would go there and donate their time, their first crops from the farms, and a whole community was created just based on sharing. For a child who grows up under those circumstances -- and who grows up in a very poor home -- a dearth of food was never an issue. You always found abundance everywhere because people were sharing.

LRK: How did you actually learn to cook?

VK: My grandmother. I was born with a certain kind of disability of my legs, so I would just stay home. I would not play like normal kids.

But it got me so involved to the point that when she would put the food on the table, the whole family got together. I thought that was so emotional for her to see the whole family come together because of her food. She would never be tired because she said she gets the energy from the smiles at the table and how people connect. That's the biggest mission of her life is to feed us. I thought, "I want to spend my whole life doing that."

LRK: What was it like for you being in the kitchen with her?

VK: It's still the best time of my life -- still. I remember every moment, every evening spent with her. Even when I go back home, we just sit in the kitchen and talk. In front of her, when I sit, it's like all my masks just come off and I'm just the real, honest, little kid she raised.

I think, "That's wonderful." She doesn't speak fluently, but whatever words come out of her mouth are so sacred. Everything she says is just so pure and it bites me to the point where I say, "I have to learn the way I'm with her, I have to be with everyone."

LRK: It's that sense you can be entirely open.

LRK: This brings to mind a project that you're working on. It's a documentary film series called Holy Kitchens. It seems to tie in to that sense of just being. Can you explain what this is?

I went back home after 7 years, and my mother asked me, "Where do you want to eat?" I said, "Let's go to the the holy Sikh temple." You go, you sit on the floor and people feed you. It's no questions asked -- who you are, your faith, your beliefs, your perspectives on life -- nothing. They just feed you.

I'm having their food, I'm holding her hand, and we are both crying because I'm back home after such a long time. I tell her, "Mom, I felt that I was hungry for so many years." It was a very emotional thing for me to tell that to her. I feel that even if my body eats, my mind is still hungry, or there are certain needs in my body that are totally hungry. It only connects through this.

During that time after 9/11, because I came before 9/11, I thought that somebody had to tell stories about what I would call interfaith relationships. I thought that was a beautiful subject to talk about. I made a small film about this, and I brought it to America to my partner and writer Andrew Blackmore. He does everything for me; he's my lifeline in America.

Then we figured out that the common denominator of every faith is sharing: how we share information, how we share love, how we share compassion and how we share food. We started making the series. We did one on Sikhism, and I recently visited Dubai, Egypt, Morocco and Bombay, India.

I commissioned somebody to go to Mecca and Medina, Saudi Arabia, because next year we are coming out with a film on the meaning of fasting during Ramadan. I think that's the biggest feast on the planet, where the whole nation breaks the fast at the same time. It has inspired me so much that I have spent almost 4 years now making the film.

LRK: This is going to be a series of seven films about seven different faiths?

I thought the most interesting response that I have been getting to the films is from Ivy League universities. It's unbelievable.

I was invited to lecture at Oxford. I said, "Guys, can we talk about cooking or something?"

"No. This is much beyond cooking. This is unique what you are touching now."

It's interesting that some people take these films to show in schools to create interfaith relationships. But we don't talk about religion in the films, we just talk about food. We see the whole thing through the lens of food, which makes it very unique.

It's not like a cooking show. I don't talk about how great the food is, but the whole concept of it, everybody sitting together and breaking fast or eating together. I think that's a much higher level of consciousness.

LRK: It's the thing we all have to do. And we have to do it every single day, right?