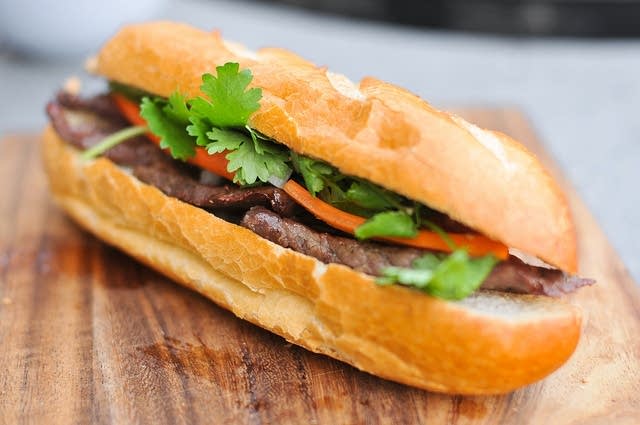 In Vietnamese banh mi means bread, but "over time it has become known as the ubiquitous Vietnamese sandwich," says Andrea Nguyen, author of The Banh Mi Handbook. She explains the basics of banh mi.

Lynne Rossetto Kasper: I know the French occupied Vietnam for almost 100 years, if I recall. Is this sandwich French or is it Vietnamese?

Then here come the French. When they occupied Vietnam, they brought along their ideas, including baguette culture. Somehow along the line, the Vietnamese started baking baguettes. I'm not quite sure how they turned out those beautiful, lofty baguettes, but they did, and people started lining them with pate.

Then in the 1940s around Saigon [now Ho Chi Minh City], they started putting in different kinds of Vietnamese charcuterie, pickles, chiles, cucumber and cilantro. They would smear mayonnaise or butter on the bread. Then they would also do this Jackson Pollock treatment with Maggi seasoning sauce, which is this soy sauce condiment the French brought to Vietnam.

LRK: What does banh mi mean?

AN: It's a funny word because it means bread. It also means sandwich; it's a shortcut for saying sandwich. When we say "banh mi," we can mean it's bread -- it could be sliced bread, it could be a baguette. Over time it has become known as the ubiquitous Vietnamese sandwich.

LRK: It really doesn't taste like any other sandwich; it's amazing, the contrasts in all those textures and flavors. How do you put together the great banh mi? What are the absolute essentials?

AN: You need a really light piece of bread. Think of it like the shell, or the frame, of the sandwich. Go to the supermarket. "Don't sweat it too much" is what I tell people because you can make it out of sliced bread if you like, just as long as it's toasted, ciabatta, a bolillo roll, a cubano roll or a supermarket "French" baguette. Don't get bread that's artisanal and chewy with a lovely crust because that's going to scrape up your mouth.

What you're going to do next is toast it in the toaster oven. Then cut it open and rip some of the insides out because you're going to be filling the bread with a lot of stuff. I like to smear mayonnaise -- whole-egg mayonnaise, please -- on the inside of the bread to moisten everything. Then the Maggi seasoning sauce; that gives the shots of umami along with the fatty richness of the mayonnaise.

Then from bottom to top, you want to put a little protein; it could be grilled meats, it could be tofu or even a fried egg. Then you've got your pickled vegetables, your chile slices, your cucumber and then your herb (most of the time, that herb is going to be cilantro).

LRK: What's in the Maggi seasoning?

AN: It is something that was invented in the 1800s in Switzerland by a miller. At that point there were a lot of people going into the factories to work because of the Industrial Revolution, so they had less time to prepare meals at home. This miller concocted this condiment that would add umami goodness to soups and stuff. Just a few drops will help the soup along.

I think that when European explorers went around the world, they brought some of that with them. The French brought that to Vietnam, and the Vietnamese wholeheartedly embraced it as this tony import product.

Now, of course, you see it at Latino markets. You also see it in American markets. In the book I have this workaround that even if you can't find it, you can always make a little substitute using Bragg Liquid Aminos, which is very similar in flavoring.

LRK: What are the absolute things that you cannot leave out? The Maggi, I gather, is one of them. What else?

AN: The Maggi is definitely one of them.

You need this sweet-sour pickle. Vietnamese pickles are not as tart as Western pickles can be. In your fridge if you have a pickle like the classic daikon carrot pickle, then you are ready to make a banh mi any time. The daikon should be cut almost like the size of your average chopstick -- not too small, not fine julienne. The carrot should be a little bit smaller than that because you want that texture.

A lot of Vietnamese sandwich shops are offering just carrot. Carrot alone is not going to do it for this sandwich; you need that little bit of funk from the daikon.

LRK: It does have funk, but that pickle is also great with almost anything: burgers, omelets, anything.

LRK: This sandwich, to me, is one of the most delicious things you can put in your mouth. It really is, and I love the flavors of the pickle.