In Norway, there is more than one way to preserve a fish

by David Leite
Listen: In Norway, there is more than one way to preserve a fish
07:04 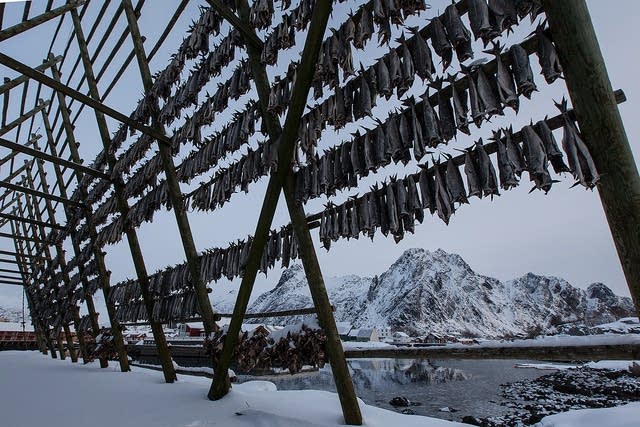 Teach a man to cure a fish, and he'll eat for a lifetime. Paul Lowe, author of Sweet Paul Eat & Make and publisher of Sweet Paul Magazine, explains four techniques for preserving fish that are used in his native Norway: curing, smoking, drying and pickling.

David Leite: In Norway where you're from, it seems as if there is this national imperative of "ye must preserve fish." Where does this come from? What's the practicality behind this? What is the tradition and heritage behind this?

Paul Lowe: You've got to remember that we used to be a very poor country. That's before we struck oil, and now we're one of the richest countries in the world.

Fish was a very important food source for us. In order to ship that fish farther into the country, we had to come up with ways to preserve it. There's smoking, salting, pickling and all kinds of things. It became something very important for us.

DL: In your book and your magazine, you talk about four basic ways: curing, smoking, salting and drying.

DL: You also say in your book that your grandmother, whom you call Mormor, used to make gravlax with aquavit. That's a marvelous dish. Can you take us through that process of what it's like?

PL: She was actually very famous for her gravlax.

DL: What did she press it with?

PL: She would just use building blocks.

She would turn it every day, and drizzle more aquavit over it. After 3 days she would take it out, she would scrape off most of the herbs, slice it up really thin, and she would serve it with amazingly sweet mustard sauce and dark rye bread. I have to say, it was really divine.

DL: Give me some ideas so I can get some really good smoked fish. First of all, what kind of fish would you use, and how would you smoke it?

PL: You would use an oily fish, so it needs to be fatty; mackerel, trout or salmon.

I find it easiest to do it on a gas grill. You will buy the smoke boxes, these cast iron boxes that you can put in your grill. You have to remember to use only the side burners.

PL: Indirect heat, yes. You use hickory chips that you have to soak. You put it in the box, then put in the fish and then you just have to wait.

PL: The temperature inside needs to be between 160 and 180 degrees Fahrenheit. Depending on how big your fish is, it will take between 1 and 3 hours.

DL: You're doing hot smoking for this?

DL: Because it also smokes and cooks the fish.

PL: Exactly. The meat will become very tender, very moist, and it sort of falls off. It almost becomes spreadable.

DL: How would you serve this marvelous smoked fish? Cold? What would you have for accompaniments?

PL: I remember when I was a kid, we served it with fingerling potatoes and cucumber salad. It is just cucumbers sliced, mixed with vinegar, a little water, lemon juice and some sugar, and of course lots of dill and sour cream. It's like the perfect summer meal because it's so light, it's so fresh and it's a little salty. It's divine.

DL: Drying is also another technique that you use to preserve fish.

PL: Our biggest tradition is of course the cod that makes bacalao.

DL: In Portuguese we call it bacalhau.

PL: They do it up in North Norway. It's amazing because they catch the fish, chop off the head, they slice it in half up to the tail, they salt it, and then they will hang it on these drying racks that are all along the coast. The sight is just incredible. It hangs there until it's dried.

DL: When you have this dried fish, how do you prepare it so you can eat it? Obviously it's dried, so you have to reconstitute it.

PL: You have to water it out. You have to soak it in water until the meat becomes soft. It's amazing to see because the meat actually becomes beautiful, tender, flaky. It's an amazing product, and it's not used that much anymore. It's sort of like some of those old vegetables people forgot about; I feel like dried cod is one of those things.

DL: You mentioned that pickling is another way of preserving fish, which is fascinating to me.

My grandmother wasn't a big fan, but my mother loved it. She would do the herring pickling in our family. She would buy fresh herring that she deboned and cleaned, and then she would make this brine out of salt and sugar, and all kinds of spices like mustard seeds, tons of dill -- I'm from Norway, so we love our dill -- and lots of onions.

Then we would serve it on flatbread with more onion and sour cream -- always sour cream.

DL: You've got me hungry.

David Leite is the publisher of the website Leite's Culinaria, which has won two James Beard awards. He is the author Notes on a Banana: A Memoir of Food, Love, and Manic Depression, as well as The New Portuguese Table: Exciting Flavors from Europe's Western Coast, which won the 2010 IACP First Book/Julia Child Award. Leite also won a 2008 James Beard award for Newspaper Feature Writing Without Recipes, a 2006 Bert Green Award for Food Journalism, and Association of Food Journalists awards in 2006 and 2007.
Baked Buckwheat Pancake with Berry Compote
Raw Sweet Potato Salad with Peanut, Fish Sauce, and Lime
Seafood Gumbo
Miyeokguk (Korean Seaweed Soup)