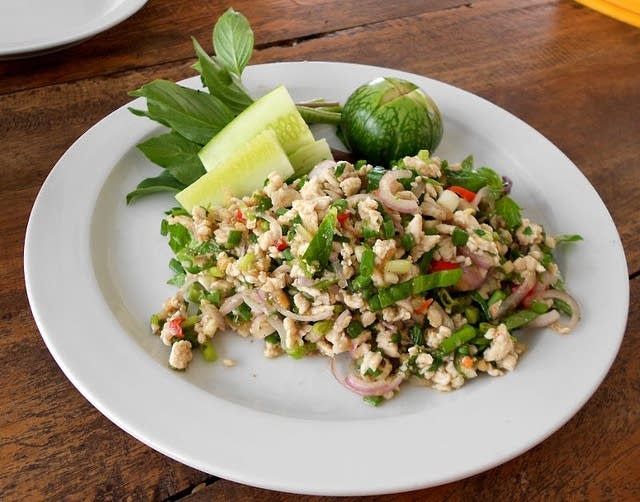 When Sheng Yang and Sami Scripter were working on Cooking from the Heart: The Hmong Kitchen in America, they discovered the Hmong people's strong oral tradition: "I had more than one grandmother tell me, 'We don't need to write it down. We know how to do our cooking,'" Scripter says.

The Hmong are "a people without a country," according to Scripter. "But that means they've always adapted to being a minority within a majority population, and they've always made the best of whatever situation they land in." (Many of the Hmong in the U.S. come from Laos.)

Writing a cookbook from an oral tradition

Sami Scripter: To make larb, you always have to use mint, cilantro and green onions. It is the national dish of Laos. It's a meat salad that can be made with any kind of meat. You also always make it with all of these marvelous fresh herbs, hot chiles, toasted sticky rice powder (you grind that in the coffee grinder) -- but always, always with the mint.

Writing a book with people who don't have a history of a written language was absolutely fascinating. For instance, there are clans. If you want to know if you are related to another person, you have to find someone who has the oral tradition for that particular clan. They can recite back for ancestors and ancestors what the lineage is. But it's only oral; they still don't write it down, it's still not in books.

I was the outsider, so I was always interviewing people. I would ask the old people, "What was important for our cookbook?" I had more than one grandmother tell me, "We don't need to write it down. We know how to do our cooking. If we choose to cook another way, that's what we'd be doing then. We don't need to have it written down."

This particular dish is almost always made when you have a lot of company. We would have 20 women in the kitchen chopping, and then the men would be out on the back porch with the big knives chopping the meat.

LRK: Would this be served as one of many, many dishes, or could I make larb for supper with sticky rice, and that's dinner?

Sheng Yang: You have to have some broth. My family, we eat between three to five dishes every night, and larb would be one of our entrees. We can have fish, pork, beef or chicken, then I will do at least two veggie dishes, one without meat and the other one with meat. I also will have a soup along with it, the chile condiment and the rice.

LRK: The thing that I was so surprised at in the book was that often the broth you talk about is as simple as just putting lemongrass in water, then cooking vegetables or meat in that water, and that's the broth. That's so much easier.

SY: Just put lemongrass in there, salt and that's it. It's very simple.

Hmong involvement during the Vietnam War

LRK: Tell the story about Hmong involvement during the Vietnam War.

SS: They were recruited by the CIA; they formed the CIA's secret army in Laos. It really changed the structure of Hmong living, because the families moved to be close to the airbases in Laos so that they could feed their men, who were hiding.

The purpose of the jobs the Hmong men got was to harass the Chinese as they brought supplies down the Ho Chi Minh Trail through Laos. It was a secret; we were not supposed to be doing these operations in Laos. They were our allies; they believed in what we believed in.

Then after we pulled out, they were left in a country that was then entirely controlled by the Communist forces that they had been fighting, which put them in terrible peril in enemy territory. Many of the families did find their way out. They had to go however they could, on foot, a lot of them crossing the Mekong River, ending up in camps in Thailand.