Experience 'the real Italy' in these 3 classic towns

by Lynne Rossetto Kasper
Listen: Experience 'the real Italy' in these 3 classic towns
08:35 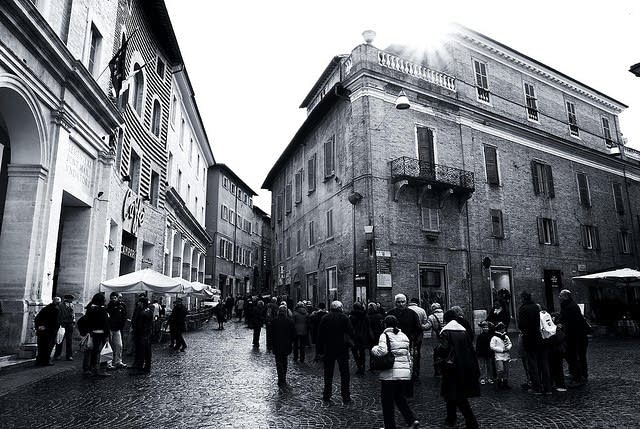 We go to Italy primed for great eating -- it's part of the culture. The art and architecture aren't so bad either. Fred Plotkin is the author of the classic guide Italy for the Gourmet Traveler, which has just been updated. He suggests three towns where visitors can experience what he calls "the real Italy."

Lynne Rossetto Kasper: You do something in your book I have not seen in other books, and I love it. It's called classic towns. These classic towns are not the ones you would expect. What is a classic town?

Fred Plotkin: I identify, for each of the 21 regions I describe, a town that gathers within its walls much of what is typical about that region.

Rather than having you go to Genoa, Portofino or the Cinque Terre in Liguria, I send you to Sanremo. Sanremo is really much more typically Ligurian, whatever that means.

A visitor who wants to discover a region and uses my book will find what makes these regions typical food-wise, culturally, scenically, in terms of the temperament of the people. When we travel nowadays, we don't have extra time; I want you to get right to the essence of a place.

LRK: What I like about this idea are the places that you have generally chosen are places that let you really drop into Italian life.

FP: Yes. Because people want -- from me, at least -- the real Italy. They don't want touristic, prepackaged Italy.

LRK: You're in and out of Italy constantly. What changes are you seeing?

FP: I just came back from a visit to Turin and Milan.

The main thing -- certainly in big cities like Turin and Milan, but all over the country -- is that Italy has not given up, but it's had to abandon some of its traditions in terms of pausing for long lunch, in terms of meals that have multicourses.

This is due in part to the economy, but it's due more to the fact that Italy is now on the world 24-hour clock. If you wake up and you have clients in China and Japan, you have to deal with them. Then you have European clients and you have North American clients. If you’re in any kind of business that deals with people abroad, you have to keep to those hours. Banks and offices in big cities often remain open all the time.

You go out for what they call a pausa pranzo, a pause for lunch. It used to be that you went out for lunch. Now at lunch, rather than have several courses, you might have one big course such as in Milan or Turin, a risotto. It will be delicious risotto, and it will be a bigger portion than you got in the past.

That would be your singular meal, and with that you might have one glass of wine. A big change in Italy is now wine by the glass. The wine is fabulous; it's better than ever. If you're going to drink less, you want to drink really well.

FP: Let's go to Sicily right away. Siracusa, Syracuse, is one of the great towns of Italy -- period. Because it's tucked in the lower right-hand corner of the triangle-shaped island, a lot of people don't get there. They get as far as Taormina, which is very beautiful, but has been a tourist resort since Roman times.

Rather I have them go further to a place that has incredible Greek ruins and temples. It has fabulous food: the best tuna, the best swordfish, a wonderful market, a wonderful passeggiata (the stroll in the afternoon), it's close to some of the best ice cream you will ever taste.

LRK: As I remember, the light is like nothing you've ever seen. The town glows.

FP: It’s true. It glows in part because the marble that they used to build the town is a sort of ochre-colored marble. So when the sunlight hits it in the afternoon, that's why everything glows.

LRK: This would be the east coast of Sicily?

LRK: Where would we eat in Siracusa?

FP: There's a little spit of land called Ortygia. Ortygia is the original, ancient community. There are several restaurants there facing the harbor. One of them is called Archimede -- like Archimedes, who is from there -- Trattoria Archimede. You eat very well.

There are about 10 places in my book on Ortygia where you eat equally well.

LRK: What are the kinds of things that you do eat there?

FP: The region of Le Marche is in the center of the country. I call it eastern Tuscany (it’s actually the Tuscany less touristed). It has a coastline on the Adriatic; wonderful fish. Seventy-six gorgeous, historic opera houses in one little region. For people who love shoes, a lot of the fanciest Italian shoes are made there.

Urbino, which I call a classic town, is where Raphael is from. Nearby are cheese caves where Michelangelo stored his Pecorino cheese. That's the classic town -- Urbino is wonderful.

FP: But I would also send you to the town of Macerata. Macerata is now the place when people who have never been to Italy call me up and say, "Fred, we want to go to a place where we will discover as much as we can of Italy in one town," I send them there.

It's a medieval town. It has a university. It's a hill town. It's surrounded by gorgeous green nature, rolling hills.

The lamb from the nearby town Visso is amazing. The pork products are amazing. They have a lasagne only there called vincisgrassi, which does not mean "victory of the fat." It was named for an Austrian general who occupied the place in 1796 whose name was Windischgratz. Windischgratz became vincisgrassi. It's heaven.

They have a fantastic summer opera festival in the Sferisterio, which is an outdoor handball arena that has perfect acoustics. Everything you'd want from Italy in one town.

LRK: How big a town is this?

You could easily negotiate up and down the hills. It also has a beautiful city hall, a gorgeous duomo, a university, an art museum. Everything you want; it's Italy in one little place.

LRK: Where should we go to eat the vincisgrassi?

FP: There are a couple of places I like there.

One of them is called Da Secondo, and that's where people typically go for vincisgrassi.

But my favorite little place is Trattoria Rosa, like the rose. They also do something else there: scrambled eggs with truffles. Not just for breakfast, but any time of the day. It too is just a phenomenal dish. The wines are very local, just a white and a red.

There’s just one hotel: Hotel Claudiani. It's not been really developed for tourism, and that's part of its charm. It's very local. The Rosa has a few rooms, there are rooms outside of town. But really, it's unspoiled.