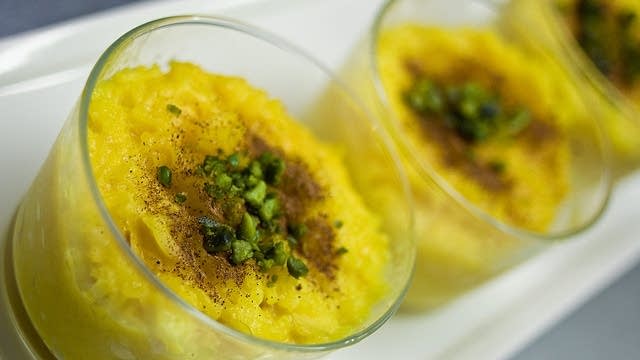 Rice is an ingredient with endless possibilities. In the U.S., we often see it relegated to the side of the plate. In Iran, however, the preparation of rice is an art form. Studded with spices, herbs, fruit and nuts, Persian-style rice is found at most meals, often taking center stage at the table. Louisa Shafia, author of The New Persian Kitchen, explains the different approach to cooking rice.

Jennifer Russell: Persian food comes from Iran. Can you give us a basic description?

Louisa Shafia: I think of Persian cuisine as a garden in the desert. That's just my first image of it, and that's how I like to describe it to people. Persian food is filled with fruits, vegetables and herbs because the ancient Persians figured out a way to bring the melted snow water from the mountains that surround Iran into vast desert areas throughout the country.

From thousands of years ago, they had gardens and orchards. They grew things like roses, pomegranates, persimmons and dill, so those ingredients made their way into every dish from desserts and drinks to main courses.

Because they had so many fruits that were native to Iran like dates, grapes and oranges, they have a lot of sour flavors in the cuisine. There's lots of tartness and citrus -- bright, fresh, fruit flavors. You'll find things like a stew that has a base of ground walnuts and pomegranates, or a stew made from rhubarb and lamb, just because they had so much fruit they had to use it everywhere. I feel like that's what really makes Persian cuisine distinct.

JR: It's so beautiful and colorful with so many flavors. Rice plays a really big role in Persian cuisine, doesn't it?

JR: Is there a specific type of rice that is usually used in Persian cooking?

LS: In Iran they have different grades of rice that they use. For the most part, they use rices that are long-grained and delicate. Then they also do have pudding rice, which is more like what you might know as sticky rice that you would find in more Asian cuisine.

JR: I understand that the approach to cooking rice is quite different.

LS: Cooking Persian rice is really an art form that has been developed literally over thousands of years. People have been perfecting their technique for a long time.

The result that you want when your rice is done is you want all the grains to be separated, you want them to be light and fluffy. There are a few ways to get this result.

The most basic way to do it is to take your rice grains and soak them in cold water for about an hour, then rinse the rice several times. What that does is it takes off the excess starch. The less starch you have, the less sticky the rice will be when it's finished cooking.

Then you take that rice that you have soaked and rinsed, and you parboil it in very salty, boiling water for about 2 minutes. You strain it out. What you want is for the inside to be uncooked, but the outside to be just starting to get tender. Again, rinse it off.

The final step, and this is really important, is you get a pan really hot on the stove. You put a generous amount of cooking fat in it -- it could be canola oil, grapeseed oil or even coconut oil, whatever you like to use -- and layer your rice onto that hot oil.

Pile the rest of it up into a pyramid shape in the middle of the pan; it'll hold whatever shape you mold it into because it's damp from being parboiled. Poke a few holes in it so that the steam can release while the rice cooks. Cover it up and put a towel -- it could be a kitchen towel or some paper towels -- underneath the lid. Then turn the rice down to low. Let it cook for about an hour.

The end result should be light, fluffy rice with all separated grains on the top. On the bottom you should have a crispy, crunchy layer of golden rice, which is referred to in Persian cooking as Tahdig. Tahdig literally translates as the crunchy rice from the bottom of the pot. It is the highlight of any Persian meal.

JR: Is that the typical way that rice is cooked?

LS: That is the typical way that it's cooked -- that is just plain rice. That can be jazzed up with anything from herbs and nuts to meat and dried fruit. It could be as simple as adding some saffron on top when it's finished. That is the simplest plain rice recipe.

JR: There are so many sweet and savory Persian rice dishes. What about sweet or dessert dishes that use rice? Are there many? Is it a popular thing?

LS: Oh, yes. One of the most popular desserts in Iran is called sholeh zard, saffron rice pudding. It has a little bit of cardamom in it, a little bit of rosewater and some saffron. It is just delicate. You cook it and you let it cool. When you eat it, it should be fully chilled. Then it gets topped with cinnamon and pistachios, and sometimes some almonds. It's just very light and delicate.

Jennifer Russell is a founding producer at The Splendid Table. Before coming to radio, she made historical and arts and cultural programming for public television. She claims to have come out of the womb a food lover -- when other girls played house, she played restaurateur. Follow her comings and goings on Twitter: @jenejentweets.
Mint and Pea Frittata with Sumac
Ginger & Lemongrass Salmon with Greens in a Parcel
Eggplant Parmesan
Fettuccine with Mackerel, Sun Gold Tomatoes, and Parmesan