The art of the slurp (or, How to eat ramen)

by Lynne Rossetto Kasper
Listen: The art of the slurp (or, How to eat ramen)
07:56 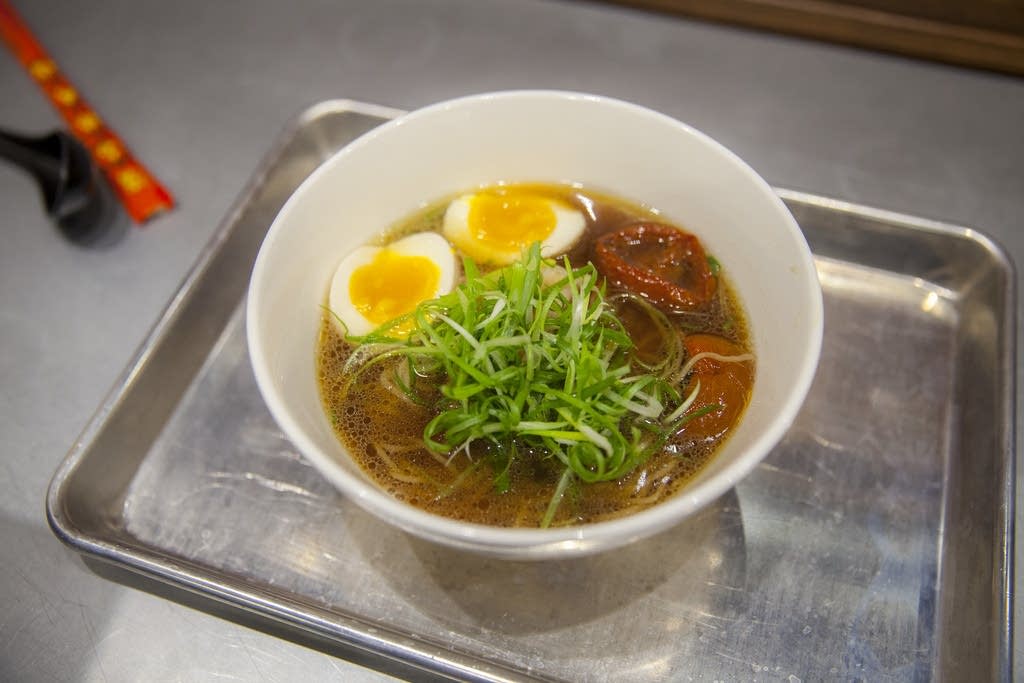 Forget everything you may think about ramen: the plastic cup, the block of noodles, the pesky spice package.

Instead, imagine ramen assembled from fresh noodles and a steaming broth, just for you. Each of ramen's nine exacting components, prepared separately over hours, comes together in your mouth when you slurp it up.

Ivan Orkin, author of Ivan Ramen and owner of Ivan Ramen Slurp Shop in New York City, is on what he calls a "weird quest to get people to understand the art of the slurp."

Lynne Rossetto Kasper: What is ramen to you?

Ivan Orkin: It's funny because you would think it's just soup noodles -- I wouldn't blame someone for thinking that -- yet it's really anything but.

It's a dish that's completely composed, balanced and harmonious. For it to really work, the soup needs to marry with the noodles. When you eat that bowl of noodles, everything comes together in your mouth when you slurp it up, which is very different than the way you would eat a bowl of chicken noodle soup.

LRK: Tell me about the components in a bowl of ramen.

IO: You have to start with the simple part: soup and noodles.

But that wouldn't have that umami excitement that all the hullabaloo is about. When you have your bowl of ramen, you also add things like a flavor base; in Japanese it's called a tare. It could be based on salt, soy sauce, miso or on a lot of different flavors, but you add that to your bowl.

In addition, you add melted fat, which could be pork fat, beef fat or chicken fat depending on what flavor you're trying to create. Then you could sprinkle in other things. In one of my dishes, I sprinkle in powdered, smoked fish.

Then you pour very hot soup on top of all of that. You add noodles into that and then toppings. At Ivan Ramen, we're really simple. We just put a piece of pork belly and a little thing of scallions on top. You can add eggs, roasted tomatoes, more meat, garlic or chile oil. It can get dressed up or it can be dressed down.

LRK: One of the components that you do is sofrito with apples, onions, ginger and garlic.

IO: Using the sofrito, to me, is one of the great secrets to adding depth of flavor to many, many different types of food; it's used in many cuisines. It's a wonderful palate that you can add other flavors to.

I have this very aromatic, deeply, long-cooked flavor base that I then add salt to, or I add soy sauce to, or in other recipes I add chile peppers to it or sesame. You get these layers and layers and layers of flavor.

I start with really delicious chicken soup; it's just whole chickens in water. Then I use not such a simple dashi, but a nice dashi that's very smoky and earthy.

IO: Essentially that's fish flakes. I take it to another couple levels by using a whole variety of that to make a more complex dashi. But in Japanese cuisine those two ingredients are the main ones, and they're used to paint all kinds of flavors.

LRK: You have two kinds of broth that you put in there?

IO: I have two kinds of broth. In Japan it's called a double soup; believe it or not, they usually use the American letter "W" to say double.

My ramen style is a very small, niche market. The most popular style is the tonkotsu, where ton means pork and kotsu means bone. The pork bone soup is very milky and rich. I like it very much, but I tend to like to cook a lighter style. As a chef, I love sending people home to feel good for many hours after they eat my food.

I found that when I was doing all my research, eating so many bowls of ramen, the ones on the heavier side would stay with me. I wouldn't be able to eat another morsel of food for 10 or 12 hours, which is great if you're a college kid, but I'm not. I was like, "I don't really want to make this. I don't really want to feed people this style."

While I still like that style and every once in a while I still eat it, mine is a much brighter, lighter version.

I never worked in a ramen shop. When I decided to do this, I was living in Tokyo. I didn't want to have a boss anymore. I wanted to have my own business, and a restaurant made a lot of sense.

At the time I was completely obsessed with ramen. I decided to open a shop, but I was also 43 years old and I didn't really want to have an apprenticeship. The ramen shop owners are very reluctant to tell you anything.

I didn't think anyone would teach me anything in a month, I wasn't prepared to commit a year or two to an apprenticeship, so I just said, "You know what? I'm going to figure this out myself." I did a lot of reading. Obviously I had already been cooking professionally for many years.

LRK: Americans have a different sensibility about soups than the Japanese do. How should I eat ramen?

IO: I'm on this weird quest to get people to understand the art of the slurp. That's my new little tagline.

Ramen really should be eaten when it's at its freshest, at its hottest. The longer it sits, it starts to suck up the soup into the noodles because, obviously, the noodles are made of flour. They're a sponge and they're just going to change what it is I originally made for you.