Culinary diplomacy: The nexus of food and diplomacy

by Rebecca Sheir
Listen: Culinary diplomacy: The nexus of food and diplomacy
07:44 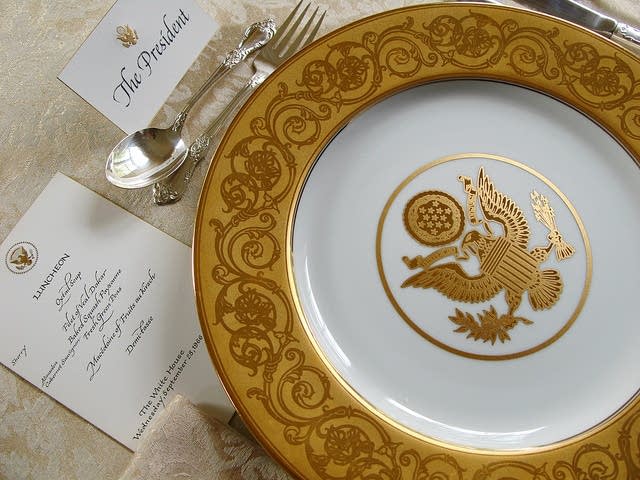 "The destiny of nations depends on how they nourish themselves," said Jean Brillat-Savarin, the 18th-century epicure.

The idea is still alive and well today. Take Sam Chapple-Sokol: His main interest is the nexus of food and diplomacy, and how they can be combined to change the world. He calls this tool culinary diplomacy.

Rebecca Sheir: What is culinary diplomacy?

Sam Chapple-Sokol: I have defined culinary diplomacy in a couple of pieces that I've written as the use of food in cuisine as an instrument to create cross-cultural understanding in the hopes of improving interactions in cooperation. That's an academic way of saying using food to get along with people, to talk with people and to get to know them better.

RS: But it's more than just being a good cook?

SCS: Yes. It’s being a good eater, a good host, a good guest. It's using food as a convener, so it's really what happens at that table with the people around it.

There's a really good word for this: commensality, which comes from the Latin com, which means with, and mensa, which means table. So it's sitting at the table with someone. That's what defines or underlies this field of culinary diplomacy.

RS: If you look at the current uses of culinary diplomacy going on around the world, what has been happening with -- you mentioned in one of your papers -- the government of Thailand?

SCS: The government of Thailand has been the most active and was the first government to really use food as a tool of diplomacy.

It started about 10 years ago. Thai Kitchen to the World was a project to advocate for Thai cuisine worldwide. Thai chefs were sent worldwide to propagate Thai restaurants.

In the past 10 years, they've been sprouting up worldwide. I have friends who have seen them in Iceland and Nigeria. This is all planned by the government so that more and more people worldwide know what Thailand is and what Thai cuisine is.

RS: Then we have the kimchi diplomacy of South Korea. Is that the same thing?

SCS: It's a similar idea. The government of South Korea has spent money to advertise Korean food worldwide. They started a Kimchi Institute in the south of the country. They've been lobbying certain cooking institutions like The Culinary Institute of America to actually have a Korean food program along with the traditional French and Italian cuisines.

RS: Here in the U.S. we've definitely been practicing culinary diplomacy on an official level. In 2011 we got our first culinary ambassador, Washington, D.C., chef José Andrés. As I understand, a lot has happened since then.

SCS: José was the first person nominated to be a culinary ambassador, and he was ambassador to the Global Alliance for Clean Cookstoves. It was a research project to create a cookstove that could be used worldwide that wouldn't pollute the air.

Since then, after José, the State Department launched its own culinary diplomacy partnership initiative in September 2012 to name about 80 chefs to an American Chef Corps. The goal of that chef corps was to advertise and promote American food abroad as a tool of American public diplomacy.

The way the program works is that when one of these chefs is taking a trip abroad, there’s a target of opportunity approach. The embassy abroad will link up with the chef and will plan a program for the day. For example, Duff Goldman, the Charm City Cakes guy from Baltimore, went to Algeria and hosted a pastry chef challenge. Or Washington, D.C., and Chicago chef Art Smith went to both Israel and the West Bank in Palestine to learn something about the food of that area as well as teach what he knows.

It's a tool of outreach as well as learning for our own chefs. There have been about 15 trips taken in the first year of the program, which has been exponentially higher than anybody could have expected.

The program is amazing. It’s completely unfunded. The chefs take the trips themselves or the embassies abroad use speaker fees to bring chefs abroad, so the State Department isn't spending a dime on this program. It's doing exactly the thing that the State Department should be doing, which is promoting an American public diplomacy tool.

RS: But culinary diplomacy doesn't just have to happen abroad.

SCS: Not at all. There are also programs teaching Americans about foods abroad. One of my favorite concepts is the Conflict Kitchen, which is based in Pittsburgh and has also moved to Oakland. It's a takeout restaurant that only serves food from the countries with which the U.S. is in conflict; they have focused on Afghanistan, Iran, Cuba and Venezuela.

Along with your arepa, the wrapper of that dish has facts and information about the people, the country and the conflict. They teach Americans what's really going on in the world through food.

SCS: I've spoken with White House Executive Chef Cristeta Comerford and she gave me some insight about what she thinks about when she's planning a state dinner. You want to represent American cuisine as an American chef should, while still making a nod, or still making a suggestion, of who you're hosting and the cuisine of the visiting head of state.

So if we were hosting the emperor of Japan for instance, we might make an American mashed potato, but we would infuse it with something like wasabi. I know it's a very simplistic example, but it's the kind of thing that these chefs think about. They do a lot of research.

RS: How would you respond to someone who says, "This is something for the elite. This has nothing to do with everything folk."

SCS: We talked about the state dinner -- of course that's something for the elite.

But we all engage in culinary diplomacy every day without even thinking about it. What's for dinner tonight? It's going to be Italian. It's going to be Thai. It's going to be Chinese. There are historical reasons that there are all these populations in the U.S.; we're this "melting pot." Many different populations have come and settled here, and that's how we learn about the rest of the world.

My first experience with another country is probably through a restaurant. A great example of that is in the D.C. area we have a very large Ethiopian population. Many D.C. residents might not know as much as they could about the country of Ethiopia, but I am sure they've been to a restaurant. If they go on U Street, there is so much good food there. That's the entrée into learning more. That's not happening at the elite level, that's going out to dinner on a Tuesday night.

Rebecca Sheir is the host of Metro Connection on WAMU 88.5 in Washington, D.C. She previously served as host of AK on Alaska Public Radio Network and reported for NPR member station KTOO in Juneau. Her stories have won numerous awards, airing on public radio programs such as All Things Considered, Weekend Edition, Marketplace, Latino USA, Only a Game, Here & Now, Interfaith Voices and Voice of America.