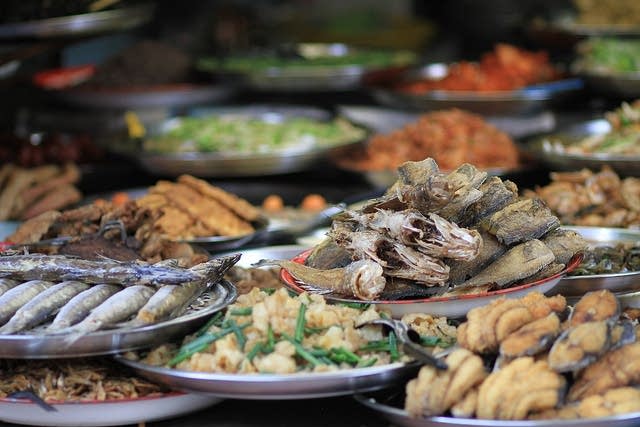 Years ago chef Andy Ricker blew Portland, Ore., out of the water with his street stand, Pok Pok. He never looked back.

With Pok Pok restaurants in both Portland and New York City and a book of the same name, he is determined to bring the authentic tastes of regional Thailand to the U.S. (Previously, he shared with us his Key 3: a recipe for steamed fish with lime, as well as his techniques for perfect jasmine rice and boiled eggs.)

Lynne Rossetto Kasper: You have traveled in Thailand for almost two decades?

Andy Ricker: A little bit over that. The first time I went was 1987.

LRK: How did you connect with people? Your recipes aren't what you are going to be served in a hotel.

AR: I was lucky enough on the second time I went there in 1992 to visit a friend I grew up with. Chris moved to Chiang Mai, met a woman at the university he was working at, got married and had a couple of kids.

His wife, Lakhana, is from a small village near Chiang Mai. It's a very Northern Thai family. They first introduced me to dishes there. We talk about it in the book a little bit -- a dish called kaeng het thawp, a wild mushroom dish. On a subsequent visit, her father taught me how to make the Northern Thai laap.

So really I started learning from the family of Chris and his wife, Lakhana. Then a network of friends materialized from that via the university and I started learning with them. After a while, I just showed so much obsession with the food, people began to accept that I was really, truly interested in the local food. I was able to start getting access to stuff that you typically don't if you're a tourist.

LRK: That's a big reason the food in your restaurant doesn't taste like most of the Thai food we've had anywhere else.

When you say Thai food when you're in Thailand, you are referring to the center of Thailand; that's where the ethnically Thai people live.

But Thailand really is broken down into four distinct regions: the South, the Center, the Northeastern Isan and Northern Thailand. They all have different ethno-linguistic backgrounds, different food traditions, terroir and different ingredients that they have access to that have formed the cuisine.

Starting in peninsular Southern Thailand, the folks down there are ethnically Malay mostly. The language is different: Pak Thai. Folks speak a different dialect.

The food tends toward the very spicy. It's where most of the coconut groves are, where the stuff like coconut cream and products that come from coconut originate. There tends to be some very thick, rich coconut curries down there. There is a lot of seafood. The staple rice there is jasmine rice.

A typical dish down there might be something called kaeng tai pla, which is a very, very spicy curry made from fish stomach. It has got a little bitter element to it.

Bangkok is in the center at the Chao Phraya River delta, so a lot of the country's vegetables and fruits are grown nearby. It's the center of industry. The royal palace has a huge influence on the food of Thailand.

The staple rice there is jasmine. The foods there tend to be more refined dishes, as well as many Chinese dishes from that area. A Central Thai dish we might be familiar with would be kaeng phet pet yaang, which is the red curry with roasted duck in it. It's this fusion of Thai ingredients with roasted duck, which is a Chinese thing. That's indicative of a Central Thai dish.

In Northeastern Thailand or Isan, the folks there are mostly ethnically Lao and some Khmer. It's a very arid climate.

The food tends to be quite simple and spicy. Sticky rice is the staple. They favor something called pla ra or padaek, which is the fermented freshwater fish that's quite funky. They make a fish sauce out of that. Probably the most iconic dish that comes out of there is som tam, a papaya salad, or tam som as they call it there too.

Then you get into Northern Thailand, Chiang Mai and regions around there bordered by Laos and Burma [Myanmar].

We're in a mountainous, jungly region, so the food tends to be herbaceous. A little bit of bitter enters into the flavor profile there. There is lots of freshwater fish and domesticated animals. The staple rice there is sticky rice.

There is not a lot of coconut up there historically, so the old-school, traditional food from there tends to be more brothy, steamed food. Boiled food is kind of the norm. Laap, a minced meat salad made with offal, blood, lots of herbs, fried garlic, shallots and spices, is a typical dish.

Related: Ken Hom on the four regions of Chinese food