Styling food for Downton Abbey is like catering, except one meal has to last all day

by Lynne Rossetto Kasper
Listen: Styling food for Downton Abbey is like catering, except one meal has to last all day
07:04 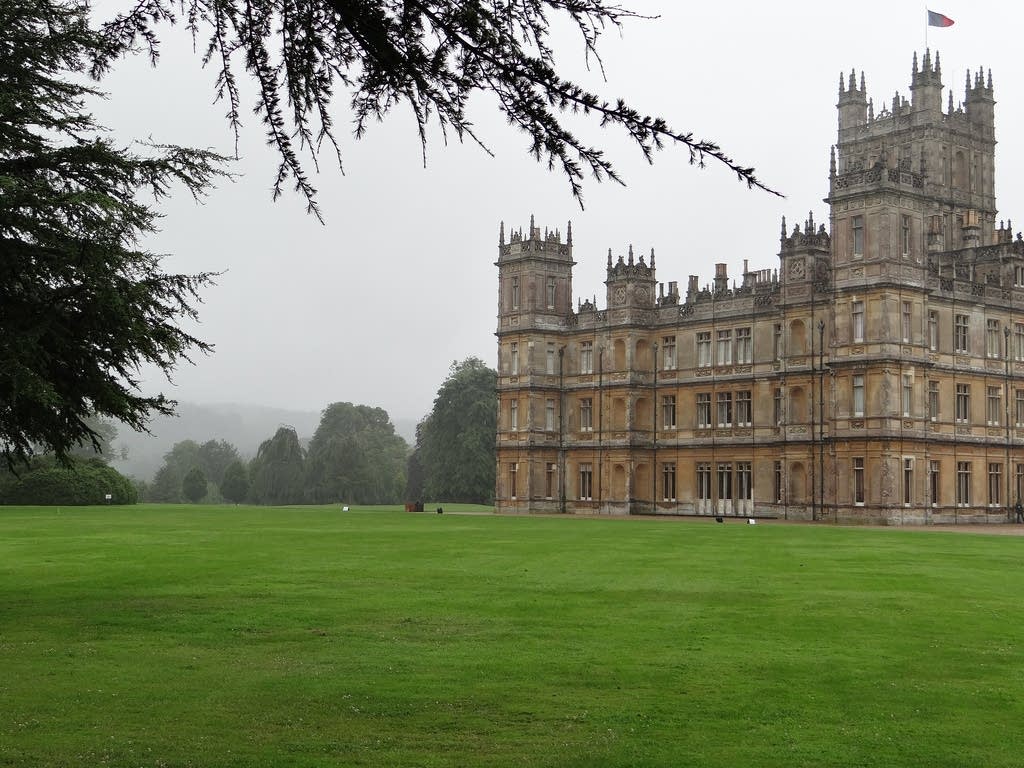 Nobody does classy soap operas like the British, and Downton Abbey is up there with the best of them. You have characters you love to love or love to hate, wonderfully tangled story lines and costumes.

But topping it all is the food: over-the-top, edible architecture. In the days of Lord and Lady Grantham, dinner was showtime and much of the bling was on the table. Meticulous chef and food stylist Lisa Heathcote creates the grandeur on Downton Abbey down to the last bonbon.

Lynne Rossetto Kasper: I'm looking at what you do. From the outside of course it looks glamorous. This looks like one plum assignment. How do you get to do this kind of thing?

Lisa Heathcote: It's a lot less glamorous than you can imagine. It is food, and I am trained as a cook.

LRK: But this is a very different kind of cooking than you would be doing if you were just doing a dinner party. You have to get these things to look spectacular for -- how long does it take to shoot a scene? How long does that food have to be there?

LH: At Downton the meals around the table, they could take all day. So I have to think, "OK, this food has got to stand there all day, it has got to look good, it has got to taste good, and it has also got to be something that you want to nibble at all day. Otherwise you're just going to feel not so good after about the third or fourth take, because they're doing take after take after take.

We have the added problem with Downton that the food has to be what we call butler service, so the actors have got to struggle with it themselves off the platter that is presented to them. It has also got to be user friendly.

I try to do something that is historically accurate. I'll give watercress, cucumber or something the actor can actually eat.

It's a bit like running a restaurant. It's like mass catering because you imagine there are 20 around the table. We'll refresh the plates every two or three takes. It's like catering for about 80 or 90 people.

LRK: That very fancy salmon covered with an aspic -- will you have a couple of those made ahead?

LH: More than a couple. A lot.

LRK: Twenty salmon floating around someplace that you hope is cold enough to keep it all from melting?

LH: Yes, exactly that. There are a good couple of days of preparation. Obviously all the food is not made on set. I have a working kitchen that I work from, then I have to pack everything up, drive it to the set and unpack it. Yes, there's a lot of work that goes in beforehand.

LRK: This is very elaborate food, especially for the upstairs. The Crawleys' dining table is not a few chops arranged on a platter with a scattering of broccoli. During that period the food was like making jewelry, it was so exact.

LH: Yes. I love that you've seen that and you understand that. Actually for me, I think it's a really fun time for food. It's great to make things look beautiful. It's all highly, highly decorated. It's like making art with food, which I really enjoy.

LRK: How much of the food that we see is real, and how much of it is a prop?

LH: We never do props because prop food looks like prop food. It doesn't look real. So all the food is real.

I made a charlotte russe the other day. A charlotte russe is very traditional of the period. It's a flavored sort of custard. It would be put into a mold with sponge fingers around the edge. Then it has jelly on top with a pat with aspic and cherries and things. You make the pat on the bottom of your mold with the jelly, put your sponge fingers in, and then put in the custard, let it set and turn it out.

However, if I'm going to do those for downstairs for Mrs. Patmore [the cook at Downton Abbey], I'd probably just use a faux cake. Then I would actually stick the jelly to the top with a pattern and put sponge biscuits around the edge so there's no custard in the middle, tie a ribbon around it, and for all the world it will look like a charlotte russe. It will stand there, it won't wilt.

LRK: You mentioned that there's watercress on the actors' plates because they are eating in these scenes. Some of the food is sitting there a long time. What are they actually eating?

LH: We do try to refresh the food. If it's been sitting there for a while, you take the plate away, clean it off and reset a new plate. This last series we seemed to have a lot of salmon mousse somehow. It seems to be scripted a lot. We don't use real fish because it just gets a little smelly and it's also not great for the actors. So I've made a lot of cream cheese salmon mousse this season, which was actually, if I may say so myself, quite delicious.

LRK: So you actually take cream cheese and tint it and texture it?

LH: Yes. I put gelatin in it and set it in a mold. If you put cottage cheese in as well, then it looks like flakes of fish. You get this whole texture. Then lots and lots of lemon juice, and maybe some herbs so it's not just a mouthful of cream cheese, which after a while is going to get very sickly. Then chill it right down. It's actually quite fresh. They've got a little bit of Melba toast with it, a little bit of cucumber. All in all, it's quite tasty.

LRK: Are there actors in the crew -- this is a behind-the-scenes question -- who really love food?

LH: I'm sure Hugh [Bonneville] won't mind because he seems to be in a lot of breakfast scenes, and he does enjoy his sausages. We have had an instance where they changed the scene on one particular day. I had ordered my sausages, but of course they weren't ready in time, so I had to go and get some other sausages. It was noted that they weren't the same sausages. He said, "Where are my delicious sausages?"