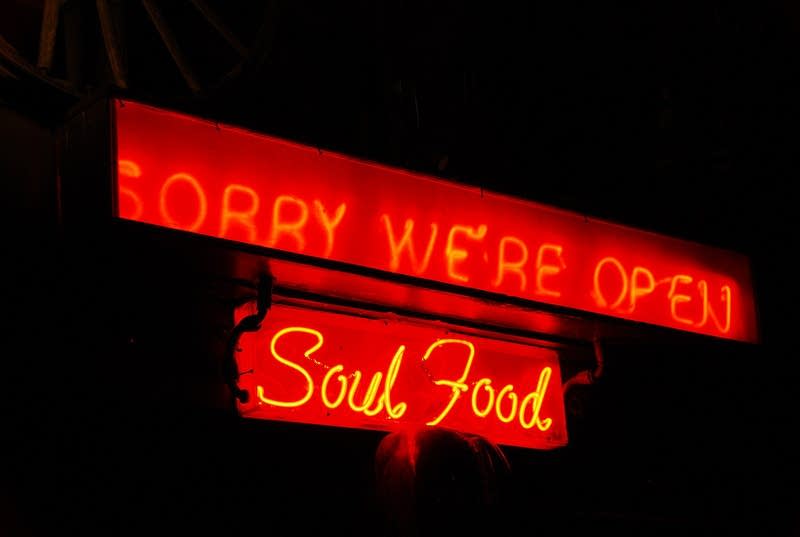 Fried chicken, the kind that dreams are made of, cheesy grits, glorious barbecue and collard greens. Today we call it soul food, but for a long time it was synonymous with Southern food. Culinary historian Adrian Miller traced the cuisine's origins in Soul Food: The Surprising Story of an American Cuisine, One Plate at a Time.

Lynne Rossetto Kasper: How do you define soul food?

Adrian Miller: In layers. Soul food is one of the traditional foods of African-Americans. African-Americans have made significant contributions to some other well-known cuisines like the cooking of the Lowcountry of the Carolinas and Georgia, and the Creole cuisine of the New Orleans area.

But's it's really the food of the migrants who left the deep South and went to other parts of the country. They did what other migrants do: They tried to recreate home through their food. To the best they could, they brought the ingredients with them. If they couldn't, they substituted them. It became the national cuisine of African-Americans.

LRK: The cuisine that African-Americans have eaten traditionally in the South is a much broader base.

LRK: In the book you have a menu, and in each chapter you talked about a particular food and its history. Which foods did you pick and why did you pick them?

AM: The meal I put together was fried chicken, fried catfish or chitlins as the entrees. I couldn't write a book about soul food without writing about chitlins. The sides are greens, black-eyed peas, mac-and-cheese and candied yams. There is also a chapter about cornbread and hot sauce because that's the soul food condiment of choice.

Then I included a chapter on red drinks because I think red Kool-Aid is the official soul food drink. And yes, red is a flavor, you should know that. Then for the desserts, I put together four that I think are the most popular: sweet potato pie, pound cake, banana pudding and peach cobbler.

AM: Chitlins are pig intestines. They're either prepared by stewing or by frying. I've never had them fried, I've always had them stewed. That seems to be the more traditional soul food preparation.

AM: No. You clean them out, you just cut them up a little bit and then you just put them in the pot with some seasoning. I put in red pepper, onion and garlic.

LRK: There's a religious connection with eating that.

AM: Yes. This was one of the surprising things to me. In a lot of traditional cultures, the innards of animals are considered sacred because they hold the life force of the animal. Even in West Africa in some Yoruba societies, they view the intestines that way. Even though they didn't have pigs, you can see that cultural legacy coming across the Atlantic and taking root in the Americas through using just different animals.

LRK: The image of a lot of soul food is that it was what the white man didn't want to eat and it is what then went to the slaves. But it sounds like this was a desirable food -- it wasn't the discards of the white man.

AM: Right. Intestines were really an aristocratic dish in England and France well back into the Middle Ages, mainly coming out of deer hunting. That was one of the biggest surprises for me was how chitlins had this high-class pedigree.

The dirty little secret of Southern food and soul food is that in most cases, whites and blacks were eating the same foods. It really depended on your socioeconomic status rather than race.

LRK: When did Southern food eaten by black people become soul food and why?

AM: It really starts to happen with the great migrations that start in 1910 and goes to the 1970s. A lot of this was spurred by economic opportunity created by World War I and other things. You have millions of African-Americans leaving the South and going to other places. The food in those other places started to be called down-home cooking, and that's the precursor to soul food.

The common explanation is that "soul food" is a term that comes from the 1960s with the black power movement, but it was floating around in the English language long before that. It had a religious connotation for centuries. It was anything that would eddify your spiritual life, so listening to a sermon, reading scriptures, all of that stuff was considered soul food.

Then it was really in the 1940s that you started to see it have a cultural spin. That's really due to the jazz musicians who wanted to take their music to a place where they thought a white artist couldn't mimic it: the sounds of the rural church in the American South. Those sounds, that gospel sound, was called funky and soul in its earlier iterations. Soul was the one that caught on. We could easily be calling this cuisine funky food, but that's not very appetizing.

LRK: That's true. But it did become much more of a term when it was used during the black power movement in the 60s and then into the 70s.

AM: Right. The interesting thing is that Southern and soul were pretty synonymous for a long time in the shared cuisine. Then in the 60s, you had some activists say, "No, no, no. There's really a separation here." They said that white Southerners really couldn't understand soul food, couldn't understand ham hocks, greens, chitlins and those sort of things.

That was news to white Southerners. That's when you see a split between soul and Southern. Soul gets associated with African-Americans while Southern is associated with whites even though there's a lot of overlap.