At the dinner table, Queen Victoria 'was greedy and she gobbled'

by David Leite
Listen: At the dinner table, Queen Victoria 'was greedy and she gobbled'
04:50 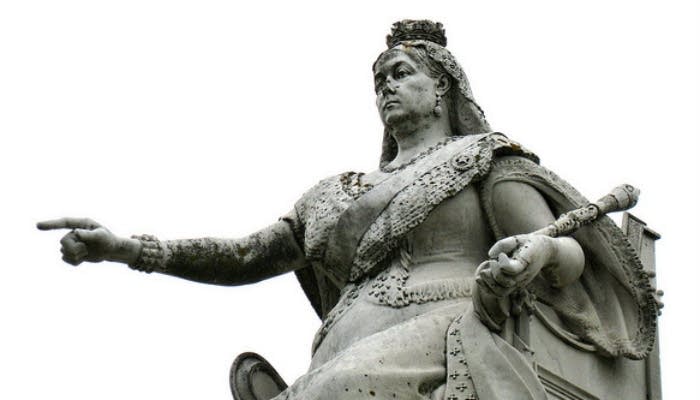 We know a lot about the life of Queen Victoria, from her evolution from girl to queen to grieving widow. But what was mealtime like in the royal household? Extremely fast says Kate Hubbard, author of Serving Victoria: Life in the Royal Household.

David Leite: What kind of eat was Queen Victoria?

Kate Hubbard: I think she ate both a great deal, but she also ate extremely fast. She loved her food. She was greedy and she gobbled. She liked her dinners to last no more than half an hour. Guests would quite often find their plates whisked away while they were still eating because once she had finished, all the plates were removed. She was a hearty eater and she was a fast eater.

DL: If someone was not done, they were done when the queen was finished.

KH: Yes, they were. Your time was up.

DL: Can you describe a little bit about some of the meals that she had -- the breakfasts, the lunches, the dinners -- where she had them, whom she had them with?

KH: Her breakfasts she would have taken on her own. She had a private dining room close to her bedroom. When Albert was alive, she would have eaten her breakfast with Albert and maybe with one of her children, but probably not, probably just with Albert. She tended to have a very protein-rich breakfast: tongue, fowl they called it -- chicken, kidneys maybe, bacon and eggs, that kind of thing.

Then lunch, which would have been around 2 p.m., she would have had with her family, with Albert and maybe with her children, but not with her ladies and gentlemen. In general their diet tended to be very meat-heavy. She often had roast fowl, roast chicken.

DL: What was this fascination with protein back then? Was it just what everyone was doing or was it strictly a court dish?

KH: No, I don't think it was strictly a court dish. I think Victorians in general ate a lot of meat. They did have vegetables. They had seasonal vegetables, so they ate things like asparagus, spinach and sea kale. But it was very heavy on meat. I think that was a general thing about Victorian England.

She would have had a large tea, and then dinner was around 8:30 or 9 p.m. That was much more elaborate. She would have eaten that in the large dining room at Windsor Castle, which was a more grand, stately and more formal room. She would have had members of her household, her ladies and her gentlemen; often there would be some guests, maybe some visiting royalties from abroad; some of her children, when they were adults. That was much more elaborate with many courses: a soup, then a fish, then a meat and then a desert.

There would have been a side table, which they called a buffet. On the side table there was a further array of meats: venison, brawn, marrowbones and maybe a large piece of beef. I think the idea was that if you were feeling a little peckish, you could fill up and have a bit of extra meat.

DL: How courtly was the conversation at the table when Victoria was eating?

There were other things. She didn't like marriage being discussed in front of her youngest daughter, Beatrice, before Beatrice married. Anyone who mentioned marriage at dinner was swiftly reprimanded.

David Leite is the publisher of the website Leite's Culinaria, which has won two James Beard awards. He is the author Notes on a Banana: A Memoir of Food, Love, and Manic Depression, as well as The New Portuguese Table: Exciting Flavors from Europe's Western Coast, which won the 2010 IACP First Book/Julia Child Award. Leite also won a 2008 James Beard award for Newspaper Feature Writing Without Recipes, a 2006 Bert Green Award for Food Journalism, and Association of Food Journalists awards in 2006 and 2007.
Chicken Orzo
Macadamia-Crusted Delicata Squash with Maple Mustard Tahini Dressing
Lime Melting Moment Bars
Curried Cauliflower Cream Soup