In Mexico, preserving a tradition of candies crafted in convents 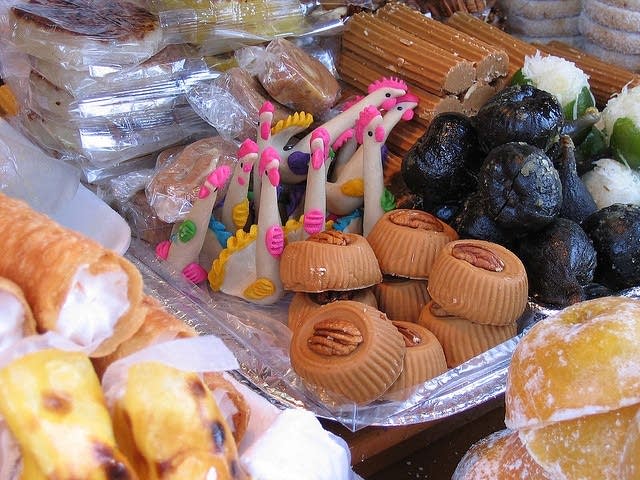 Imagine these sweets: glistening little candied limes stuffed with fresh coconut, individual pumpkin seed nougats sitting on little squares of banana leaves, cinnamon-orange candy with pinto beans that taste like sweet chestnuts, honey-spiced Arab candies. Unless you're lucky enough to be from a Mexican family or live in the right neighborhood, this is the Mexican food most of us have not seen. Chef Fany Gerson is pulling back the curtain with her book My Sweet Mexico: Recipes for Authentic Pastries, Breads, Candies, Beverages, and Frozen Treats.

Lynne Rossetto Kasper: These sweets do not look like anything that we're familiar with. There's a vividness to them.

Fany Gerson: Just like the culture, they're very colorful in every way -- not just visually, but also culturally. There's a very strong family tradition of making sweets. Every region has its specialty, every family has its special recipe. I think one of the most interesting aspects is that they all have very strong historical backgrounds.

Many people may not realize this, but there are a lot of parallels between Arab cuisine and Mexican cuisine because they occupied Spain for many centuries. When the Spaniards came to Mexico, they brought their recipes and their influence. The climate in Mexico lent itself to replicate a lot of these recipes. But then they found that they had all these new ingredients; they brought with them sugar and dairy, but then they found mangoes, limes and chiles. It's the cultural blend coming together that makes it so wonderful. The array is just outstanding.

LRK: The sweetness seems incredibly intense, the flavorings seem incredibly intense. Sweet potato candies, milk fudge and coffee-flavored corn cakes or corn cookies -- these sound so powerful. Am I getting carried away?

FG: No, I think you're right on. In Mexico there are few things that are subtle. We like full-forward flavors, colors and everything.

There's a big tradition of sweets, but not necessarily of desserts. We don't have the tradition of pie or things like that that you have at the end of the meal. You'd rather have a selection of sweets at the end of a meal. You save those cake-like desserts for special occasions. Because we have all these sweets, they tend to be kind of small, very intensely flavored and very sweet. You're just supposed to have a few. It's almost like a sensual aspect to them, I think.

LRK: That's I think what comes across is the sensuality.

FG: I do have to say that most of these kinds of confections are not something that people normally prepare in their own homes. They are something that you leave to the experts -- people who make their living out of making these confections.

LRK: You have a whole section on convent sweets. What's the history there?

FG: The history of the convents I think is responsible for the majority of the sweets tradition, if I dare to say, in Mexico. Because when the Spaniards arrived, a lot of nuns arrived and they set up a lot of convents. In these convents they needed to do certain things to bring in money. One of the things that they did was to educate young girls from wealthy families. They educated them in different aspects, and one of the aspects was cooking.

There is some data that they had also some African slaves and Caribbean slaves, so they all got together in the kitchen. I also think that it was a way to escape. If you look at even the names of some of the sweets -- they have kiss of an angel, they have these little meringues called suspiro, which means sigh -- I almost wonder if it wasn't a way for them to manifest how they were feeling and just put their passion into their food.

Then the nuns would also sell their sweets to try to bring in some money. They became very known. Puebla, which is near Mexico City, is known for its candies and the convents that are responsible for them.

LRK: What's the most exciting thing about these foods for you?