To feed a crowd, Amy Sedaris suggests roasting hot dogs on a rake 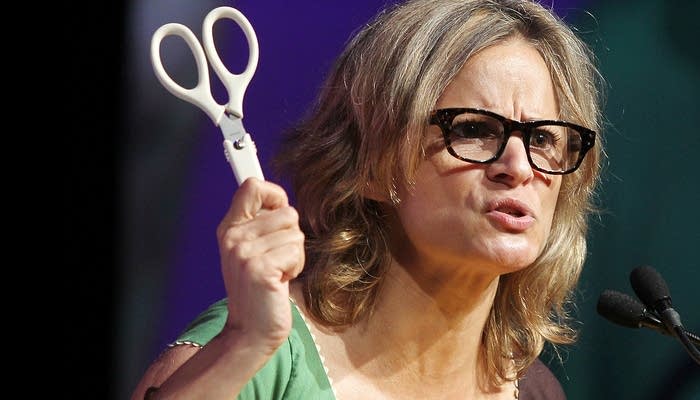 Things To Do With Rice
Gold in the kitchen: amp up your cooking with caramelized onions
Bryant Terry's Vegan Soul Kitchen brings fresh flavors to traditional soul food
Photo: ALA - The American Library Association/Flickr

Photo: ALA - The American Library Association/Flickr

Actress, writer and comedian Amy Sedaris is a woman of many talents. With her own unique approach to entertaining, Sedaris single-handedly brought back the retro cheese ball and conjured the best idea I have ever heard of for nosy guests -- just fill the medicine cabinet with marbles. From salt igloos to knit sausages, Sedaris shares culinary crafts from her book Simple Times: Crafts for Poor People. [Ed. note: Read an excerpt here. You can also find a preview of the book as well as some crafts on Sedaris' site.]

Lynne Rossetto Kasper: You had to have had the most fun doing this book.

Amy Sedaris: I did have the most fun doing this book. It was a riot. It was ambitious; we did a lot in very little time. We shot it all in my apartment and I fed people. I had a Crock-Pot going 24 hours a day full of canned chicken soup with a stack of white saltine crackers next to it.

LRK: You are so true to your traditions. Have you always crafted?

AS: I have. I still make the same things I made when I was 5, when I was in Girl Scouts. Nothing has changed. I'm very limited, but I know who can craft well, I know where to find them and I know what I want. The things in the book that I made are pretty obvious -- they're the ones falling apart.

LRK: What are some of your favorite culinary crafts?

AS: There's a salt igloo in the book. It's beautiful. A friend of mine made it. I just think it's lovely, and that's something that you could put out if you're cooking. To have that around in your kitchen or on a table display, it'll get a lot of attention, so I like that.

LRK: Do you chip at it to season food, or do you leave it solely as a centerpiece?

AS: I didn't think about chipping at it. I would say I'd leave it out -- it could be seasonal. Then you can put it away and bring it back out. It's not going to go away.

LRK: That's true. It's salt -- it doesn't really go anywhere. What else?

AS: This time what I did in the craft book is I made a lot of food and used it to put around the craft project.

I'd make this huge cake, a drumstick cake, which is just a white cake. I used those peppermint sticks so it looked like a drum. Then I might put that in the background and just say it's about a knit cap with bangs attached to it. So I used food to put next to the crafts this time. The food looked like it was being the scene-stealer, but it was really behind the scenes.

AS: Yes, a friend of mine knitted some sausages. I wanted a whole chapter on sausage making because originally I wanted to make a wig out of real sausages, sausage links. I thought it'd be funny.

But instead I ended up building a log cabin out of the sausage links. There's a chef from a restaurant in New York who gave me all the sausage recipes except for the sausage cookie, which I had at a wedding when I was in the mountains in North Carolina. I swear to God, it was like a chocolate chip cookie but without the chocolate chips. Instead they used sausage. It was really kind of nasty.

LRK: I don't think there's anything wrong with that. That makes perfect sense.

AS: They were good at the time. On top of a mountain, it's just what I wanted to eat.

LRK: I can imagine.

AS: But then I found this girl and she knitted those sausages. They're beautiful.

LRK: They also are going to last longer than the real sausages.

AS: Yes, they're going to last longer and you can put them around your neck like a neck brace. The chorizo neck warmer.

Then I have hot dogs on a rake, where it's a poor man's hot dog-roasting thing. I take a big rake, I would force hot dogs onto it and stick them in my fireplace. Nasty, but it works.

LRK: You can also feed a crowd that way. You don't have to do them one at a time.

LRK: You did a whole chapter on confectionery.

AS: Yes, I wanted to have a sweet chapter because I was doing a movie with Neil Patrick Harris -- his mother sent him these Ooey Gooey Bars, and they were just fantastic. That's where I got the idea to do a whole chapter and just ask people -- their mothers -- if they had any old recipes. I just filled the chapter with recipes from mothers.

Except there's a clubhouse cookie that involves marijuana -- keeping it green. It's a great recipe, all organic. It's really good. You need that if you're going to do a craft book, trust me.

LRK: I understand. We're just going to let that go. What homemade gifts are you making this year?

AS: The only thing that I make to give away are those potholders where you buy the plastic loom and you use those cotton loops. I know people have been making those since they were 5 years old, but I didn't discover that kit until I was in my early 40s. I can make those potholders -- I make them very well -- and I sell them. I've already sold out, but I usually sell them on the book tour.

That's what I'll give out, but normally I don't like to give away crafts because nobody wants them. It's just crap nobody wants. Nobody wants it. There's a great fudge recipe in the book. Giving food for presents is a really nice idea I think. Coffee cake. I'm for giving food away, but crafting, no. It's just going to end up in the garbage.