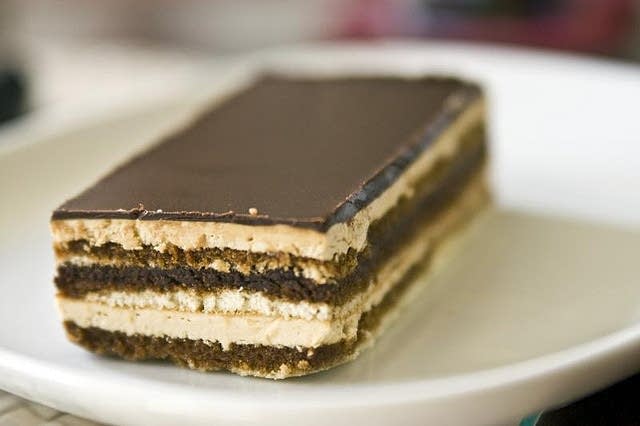 It is hard to say exactly who invented the Opera Cake. Some sources claim there was a type of Opera Cake sold in Paris as long ago as 1890, and some think the Parisian specialty was created closer to 1950. But the point about which there is no controversy is the only important point: The greatest Opera Cake is made at Dalloyau. There, executive pastry chef Pascal Niau makes a cake as sleek and smooth as an opera stage and as gloriously delicious as La Boheme is affectingly beautiful.

The classic Opera Cake is a work in six acts. There are three thin layers of almond cake, each soaked in a potent coffee syrup; a layer of espresso-flavored buttercream; one layer of bittersweet chocolate ganache; and a topping of chocolate glaze. Traditionally, the cake is decorated with its name written in glaze across the top and finished with a piece of shimmering gold leaf. It is obviously a rich cake, but it is surprisingly not a filling cake, and I'm convinced this is because Maestro Niau has orchestrated the cake's elements so perfectly.

A note on size: This recipe makes a square Opera Cake that is a festive - and impressive - 10 inches (25 cm) on a side. If this is more cake than you need, don't cut down the recipe - you won't be successful with some of the cake's components, particularly the buttercream, if you reduce the quantities. Instead, make the full cake, cut it into smaller size cakes and stock them in your freezer.

2. Working in a clean dry mixer bowl fitted with the whisk attachment, beat the egg whites until they form soft peaks. Add the granulated sugar and beat until the peaks are stiff and glossy. If you do not have another mixer bowl, gently scrape the whites into another bowl.

3. In a mixer fitted with the paddle attachment, beat the almonds, confectioners sugar and whole eggs on medium speed until light and voluminous, about 3 minutes. Add the flour and beat on low speed only until it disappears. Using a rubber spatula, gently fold the meringue into the almond mixture, then fold in the melted butter. Divide the batter between the pans and spread it evenly to cover the entire surface of each pan.

5. To make the syrup: Stir everything together in a small saucepan and bring to the boil. Cool. (The syrup can be covered and refrigerated for up to 1 week.)

6. To make the buttercream: Make a coffee extract by dissolving the instant espresso in the boiling water; set aside.

7. Bring the sugar, water and vanilla bean pulp to a boil in a small saucepan; stir just until the sugar dissolves. Continue to cook without stirring until the syrup reaches 255 degrees F (124 degrees C), as measured on a candy or instant-read thermometer. Pull the pan from the heat.

8. While the sugar is heating, put the egg and the yolk in the bowl of a mixer fitted with the whisk attachment and beat until the eggs are pale and foamy. When the sugar is at temperature, reduce the mixer speed to low and slowly pour in the syrup. Inevitably, some syrup will spin onto the sides of the bowl - don't try to stir the spatters into the eggs. Raise the speed to medium-high and continue to beat until the eggs are thick, satiny and room temperature, about 5 minutes.

9. Working with a rubber spatula, beat the butter until it is soft and creamy but not oily. With the mixer on medium speed, steadily add the butter in 2-tablespoon (30-gram) chunks. When all the butter has been added, raise the speed to high and beat until the buttercream is thickened and satiny. Beat in the coffee extract. Chill the buttercream, stirring frequently, until it is firm enough to be spread and stay where it is spread when topped with a layer of cake, about 20 minutes. (The buttercream can be packed airtight and refrigerated for 4 days or frozen for 1 month; before using, bring it to room temperature, then beat to smooth it.)

10. To make the ganache: Put the chocolate in a medium bowl and keep it close at hand. Bring the milk and cream to a full boil, pour it over the chocolate, wait 1 minute, then stir gently until the ganache is smooth and glossy.

11. Beat the butter until it is smooth and creamy, then stir it into the ganache in 2 to 3 additions. Refrigerate the ganache, stirring every 5 minutes, until it thickens and is spreadable, about 20 minutes. (The ganache can be packed airtight and refrigerated for up to 3 days or frozen for 1 month; bring to room temperature before using.)

12. To assemble the cake: Line a baking sheet with parchment or wax paper. Working with one sheet of cake at a time, trim the cake so that you have two pieces: one 10-x-10-inches (25-x-25-cm) square and one 10-x-5-inches (25-x-12.5-cm) rectangle. Place one square of cake on the parchment and moisten the layer with coffee syrup. Spread about three-quarters of the coffee buttercream evenly over the cake. (If the buttercream is soft, put the cake in the freezer for about 10 minutes before proceeding.) Top with the two rectangular pieces of cake, placing them side by side to form a square; moisten with syrup. Spread the ganache over the surface, top with the last cake layer, moisten, then chill the cake in the freezer for about 10 minutes. Cover the top of the cake with a thin layer of coffee buttercream. (This is to smooth the top and ready it for the glaze - so go easy.) Refrigerate the cake for at least 1 hour or for up to 6 hours; it should be cold when you pour over the glaze. If you're in a hurry, pop the cake into the freezer for about 20 minutes, then continue.

13. To glaze the cake: Bring the butter to a boil in a small saucepan. Remove the pan from the heat and clarify the butter by spooning off the top foam and pouring the clear yellow butter into a small bowl; discard the milky residue. Melt the chocolate in a bowl over—not touching—simmering water, then stir in the clarified butter. Lift the chilled cake off the parchment-lined pan and place it on a rack. Put the rack over the parchment-lined pan and pour over the glaze, using a long offset spatula to help smooth it evenly across the top. Slide the cake into the refrigerator to set the glaze and chill the cake, which should be served slightly chilled. At serving time, use a long thin knife, dipped in hot water and wiped dry, to carefully trim the sides of the cake so that the drips of glaze are removed and the layers revealed.

An American in Paris: I rarely play around with this classic, but when I do, it's to add a little crunch to the mix by pressing toasted sliced almonds onto both the buttercream and the ganache. 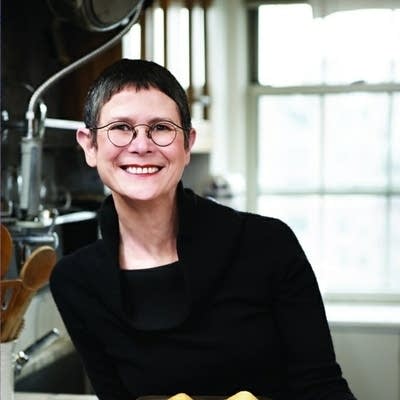