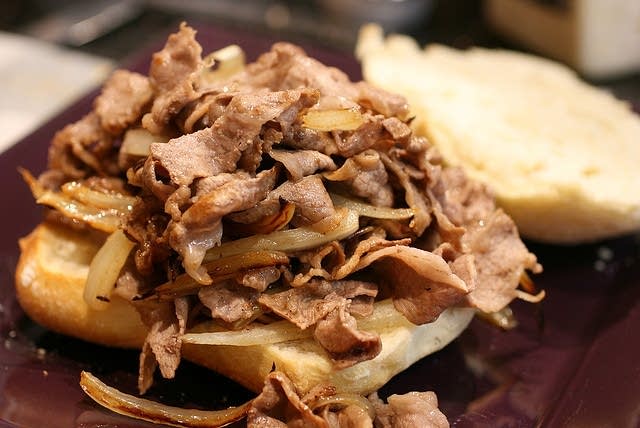 We’ve taken a few liberties with the traditional preparation. Contrary to the usual practice, we salt and pepper the meat and vegetables first, and we have used a much better cheese than the typical bland, rubbery provolone or, even worse, that yellow stuff. Be sure to include pickled peppers -- they really make the sandwich sing. And if you have a taste for the hot stuff, sprinkle on plenty of your favorite bottled sauce.

If you’re going to use the onion and pepper, sauté them separately in small saucepans with 1 tablespoon olive oil in each until soft, stirring often. The onion will take 10 to 12 minutes, the pepper a little less, 8 to 10 minutes. Sprinkle with salt and pepper and set aside.

Using your thumbs, split the roll or bread open without totally separating the 2 halves. Set aside.

Spread the onion and green pepper, if using them over the roll. Put the meat and cheese on top. Garnish with the optional pickled peppers and hot sauce. Serve at once with plenty of napkins.

Adapted from The Complete Meat Cookbook, by Bruce Aidells and Denis Kelly.